TF Sport started 2016 where it left off in 2015, with Derek Johnston and Jonny Adam taking victory in an attrition filled opening round of the 2016 British GT Championship that saw no more than an hour of racing from the planned two hour race.

Barwell Motorsport’s Fabio Babini and Liam Griffin finished fourth, a second ahead of the Beechdean-AMR Aston Martin Vantage GT3 of reigning champion Andrew Howard and reigning GT4 champion Ross Gunn, the latter sealing an impressive debut, the former being chiefly responsible for bringing the Aston Martin up from 14th to 8th before the mandatory stops.

However, two significant incidents curtailed race time, the first was a sizeable crash involving Motorbase’s Phil Dryburgh and Generation AMR MacMillan Racing’s Matthew Graham on the approach to Pilgrims Drop on the GP loop of the Brands Hatch circuit. This generated the first ‘Code 80’ in British GT’s history and a 40-minute delay ensued while cars were removed and barriers repaired.

The second incident was arguably less significant in scale, but presented a safety issue strong enough to bring the race to an early end. On lap 50 with 20 minutes to go, Luke Davenport’s Tolman Motorsport Ginetta G55 GT3 came to a halt prior to Surtees when the catalytic converters caught fire at the rear of the car. 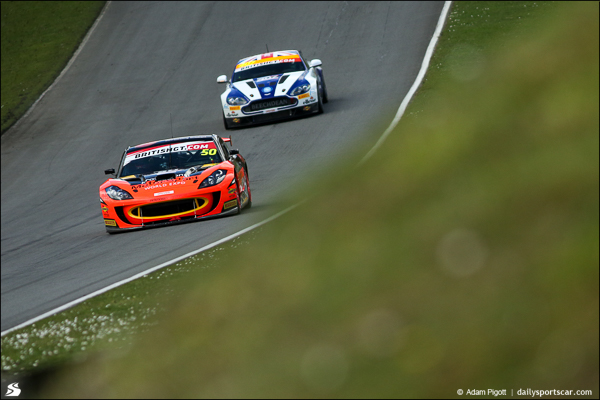 What should have been a two hour race was effectively reduced to just one hour’s competitive running as incidents constrained the opening round of the 2016 British GT4 Championship at Brands Hatch.

Anna Walewska held her well-earned pole-position in the #73 Century Motorsport Ginetta G55 to lead into Paddock, but was overhauled by Graham Johnson’s PMW Expo / Optimum Ginetta on the second lap, having traded places with last year’s championship winning #407 Beechdean Aston Martin, which was always in the hunt before contact dropped the Aston Martin’s new young crew of Jack Bartholomew and Jordan Albert off the podium later in the race.

The #50 Ginetta never looked threatened, Johnson keeping his head to manage his track position under a 30 minutes Full Course Caution that spanned the pit stop window: a huge accident involving one of the Motorbase GT3 cars and two of the GT4 runners, one of them the Generation AMR car of Matt Graham and Jack Mitchell running among the leading GT4 pack – was thankfully without injury but ultimately decided the outcome of the race.

Having taken over the #50 car, Mike Robinson was able to control his race from the front to take the win after the race was Red Flagged 20 minutes early following another GT3 incident.

Nathan Freke had taken over the #73 Century Ginetta and made steady progress from fourth at the pit stops to land a solid second place. But perhaps the most notable performance came from the #45 RCIB / Team HARD entry of Jordan Stilp and William Phillips. Championship rookies, their Ginetta had looked strong all weekend. Third place on the podium was a great start to their inaugural season, the red flag denying further progress that was not beyond possibility.