A strong opening stint from Mark Webber saw Porsche take control of the WEC 6 Hours of Silverstone by the time the first round of pit stops came around. 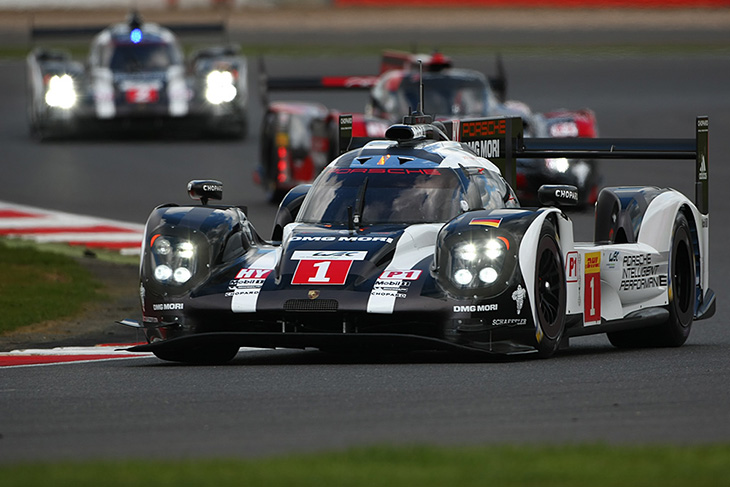 Poleman Lotterer made a perfect start in the #7 Audi and initally began to pull out a lead of several seconds on team-mate and fellow front-row starter Oliver Jarvis in the #8, but it wasn’t long before third-place man Webber in the #1 Porsche was closing the gap. There were no incidents at the first corner, but in P2, Pipo Derani in the #31 ESM Ligier was immediately on the offensive, making a robust pass on Vitaly Petrov’s #37 SMP BR01 for the lead of the class. 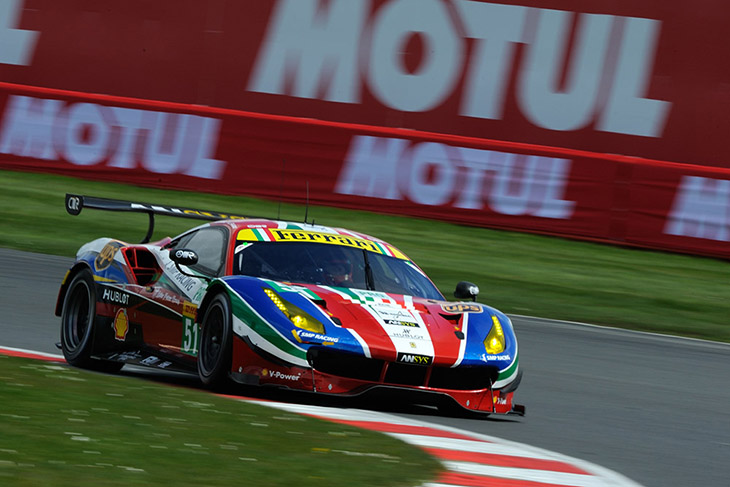 GTE Pro and Am were less lively in the opening laps, with (in Pro) Rigon’s #71 Ferrari, Lietz’s #77 Porsche and Mucke’s #66 Ford circulating as they’d started. It was a Porsche 1-2-3 in Am courtesy of the two Proton machines of Bachler and Henzler, with Adam Carroll holding third on the Gulf Racing 911’s WEC debut. One car with a mountain climb today is the #51 Ferrari, which had to serve a three-minute stop-and-go penalty for an overnight engine change.

Webber was past Jarvis for second by lap seven, with the gap to leader Lotterer just 5.5 seconds. The Porsche had the pace, however, closing to within a second before very long and passing for the lead down the pit straight into Abbey corner on lap 16. Elsewhere, Jarvis came under pressure and was eventually passed by Romain Dumas in the second Porsche before the first round of stops began.

In LMP2, as Petrov went backwards, the battle for second place was between Senna in the RGR Ligier and Rusinov in the G-Drive Oreca. Some touring-car-style bumping and banging on the way into Maggotts saw Senna get ahead just before the first round of stops for the LMP2 runners began. Further down the field in this class, there were some entertaining battles between Johnny Kane in the Strakka Gibson and both of the Manor Orecas.

With the first round of pitstops for all classes completed and just under an hour in the bag, Hartley had taken over the leading Porsche and was 14 seconds up the road from Jarvis (with Audi electing to double-stint its drivers). Lotterer and Jani were third and fourth and the two Toyotas in their familiar 2015 positions of fifth and sixth.

Cummings’ mistake handed the LMP2 lead to G-Drive, with Rusinov still on board the Oreca. The second-place RGR Ligier, meanwhile, was now the responsibility of Ricardo Gonzalez, with Strakka also having done well from the pit sequence and holding third with Johnny Kane still at the wheel of the Gibson-Nissan.

In GTE Pro, Bird had taken over from Rigon in the leading Ferrari, while Mucke had stayed on board the #66 Ford, which now sat second ahead of the sister #67 car of Priaulx. The #77 Porsche had done a driver change and dropped to fourth in class, now being driven by Christensen. Also in this class, the #97 Aston was given a stop-go penalty due to repeated track-limits violations by starting driver Fernando Rees. GTE Am continued to be a Proton Porsche show in first and second, with Al-Qubaisi in the #88 leading Reid in the #78.