The pole-sitting #7 Audi of Andre Lotterer, Benoit Treluyer and Marcel Fassler has won the season-opening WEC 6 Hours of Silverstone, finishing 46 seconds ahead of the #2 Porsche of Neel Jani, Romain Dumas and Marc Lieb.

The race wasn’t an all-time classic in the mould of last year’s Silverstone event, but two of the main contenders were eliminated relatively early on. A strong opening stint by Mark Webber in the reigning champions’ #1 car that wrested the lead of the race from the polesitter was undone in spectacular fashion when Brendon Hartley (having taken over from Webber) had a coming-together with the GTE Am-class Gulf Racing UK Porsche at Farm. Hartley’s 919 very nearly flipped over in the incident (video here) but both cars eventually came to rest right side up, with damage but thankfully unharmed drivers. Shortly afterwards, the #8 Audi with Lucas di Grassi at the wheel ground to a halt in the complex. Hybrid system failure was diagnosed and the Brazilian, Duval and Jarvis would go no further.

That left the #7 and #2 to fight it out for the lead, but contact with one of the GTE Fords plus a late-race puncture put paid to the Porsche trio’s efforts, taking the pressure off the sole remaining Audi as the clock wound down. The final stroke in favour of the #7 was a last-minute splash-and-dash for the 919 that left it the best part of a lap down at the flag. The #6 Toyota of Kobayashi, Conway and Sarrazin finished third, but as last year the Japanese manufacturer was some way off the pace of its German rivals throughout. The other TS050 was taken out of contention by a tyre failure and resulting bodywork damage, which brought out a safety car mid-way through the race.

Of the privateers, the Rebellions finished fourth and fifth, while the Kolles suffered hydraulic problems and came home behind the majority of the LMP2 field. G-Drive Racing also looked very racy in the first half of the race, but a fuel-pump problem while Rene Rast was in the car meant he, Roman Rusinov and Nathanael Berthon would wind up third, ahead of the #36 Signatech Alpine, the #42 Strakka Gibson and the #45 Manor Oreca, the latter coming home sixth in class for the team’s first-ever endurance race. 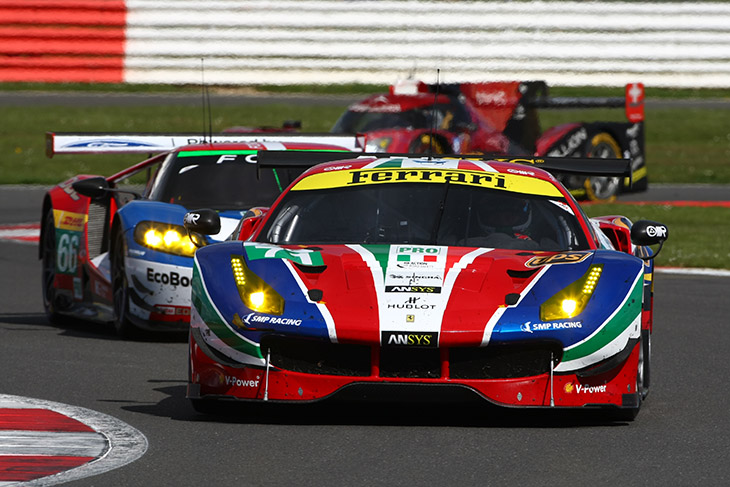 In GTE Pro, Davide Rigon and Sam Bird were never seriously challenged at the head of the field in the #71 AF Corse Ferrari. The pace of the new 488 was underlined by a charging recovery drive by their team-mates Calado and Bruni in the #51 car to second, having started at the back of the field and served a three-minute drive-through penalty for a pre-race engine change.

Following the Ferraris home was the #95 Aston Martin of Thiim, Sorensen and Turner, having run as high as second for much of the race. GTE Am also went the way of Ferrari, this time the year-old #83 458 of Collard, Perrodo and Aguas.

Andre Lotterer (#7 Audi): “It’s amazing and a great relief for the team. It’s crucial to be back on the top of the podium. There wasn’t much I could do about Webber in the first stint, so we had some luck on our side with the #1 crashing out, but that’s racing. It’s fantastic for the Audi Sport crew after all the work put in over the winter.”

Benoit Treluyer (#7 Audi): “The spin was 100% my fault, I was pushing too hard and got too much on the brakes into the corner.”

Marcel Fassler (#7 Audi): “I didn’t quite do a full stint on the tyres at the end and I was careful as it’s quite easy to collect pick-up. The peak was gone, so it was quite a relief to see the Porsche do a splash-and-dash – I wasn’t expecting that.”

Romain Dumas (#2 Porsche): “I had a great battle at the start, but I wasn’t able to pass Jarvis. We had a damaged nose, which we changed during the safety car. Our target was to stay with the Audi and I think we had the speed, but then I had a slow puncture so we had to make an extra stop.”

Bruno Senna (#43 RGR Sport by Morand Ligier): “My first stint was good and Ricardo did a great job in his. In the second, we lost tyre temperatures during the full-course yellow; for the last six or seven laps, the left front was completely out of its window. We also had radio issues, but fortunately there was a nice gap to P2 when Filipe took over.”

Filipe Albuquerque (#43 RGR Sport by Morand Ligier): “The guys did a fantastic job to hand me the the car in a good position. I made sure to save the tyres in case we needed to push but it was okay in the end. This was my first time working with the team and I had a new race engineer, so hopefully there’s lots more to come.”

Sam Bird (#71 Ferrari): “It was a perfect weekend – we lead every lap and won. It’s Davide’s first WEC win and my first in Ferrari colours, so it’s extra-special for both of us.”

Davide Rigon (#71 Ferrari): “It’s a good feeling to get my first WEC win – the first of many, hopefully. We’ve both come from formula cars, so we have similar style; maybe that’s why we’re working together so well from the off.”