Leading all but three of the 75 laps in the 100-minute race, the Taylors successfully defended their victory on the 1.968-mile temporary circuit, giving the Corvette DP its first win of the season. It was the fifth IMSA WeatherTech SportsCar Championship victory for the Taylors and 12th career victory for both brothers in major North American sports car competition.

Joao Barbosa finished second, 2.958 seconds behind after taking over from Fittipaldi in the #5 Mustang Sampling Corvette DP. Action Express Racing teammates Eric Curran and Dane Cameron took third in the #31 Whelen Engineering/Team Fox Corvette DP, 4.159 seconds back at the finish.

While off the podium, Mazda Motorsports had its best outing to date in WeatherTech Championship competition. Tom Long led three laps and joined Joel Miller in finishing fourth in the #70 Castrol/ModSpace Mazda Prototype, one position ahead of Tristan Nunez and Jonathan Bomarito in the team’s #55 entry.

“I was devastated after qualifying,” Taylor admitted. “Track position is so important here at Long Beach. I was thinking about it all night, and with the race not starting until 4 p.m., I planned so many scenarios for the start of the race.

“Sometimes when you’re second, it’s a nice position to be in, and you’re not the first person to feel the grip levels and you can be the one attacking. Christian gave me some room, there was some rubbing, but it was fun.

“If you can’t win, finish second and take the points,” said Fittipaldi, who is seeking his third consecutive Prototype title with Barbosa for Action Express. “I’m sure these points will be important at the end of the season, and now off to next race. I’m happy to be leading the championship leaving Long Beach today.”

Overcoming a mid-race penalty with a late-race pass, the #911 Porsche North America Porsche 911 RSR entry of Patrick Pilet and Nick Tandy crossed the finish line first in GTLM at the lone IMSA WeatherTech SportsCar Championship street course of the year for the class. 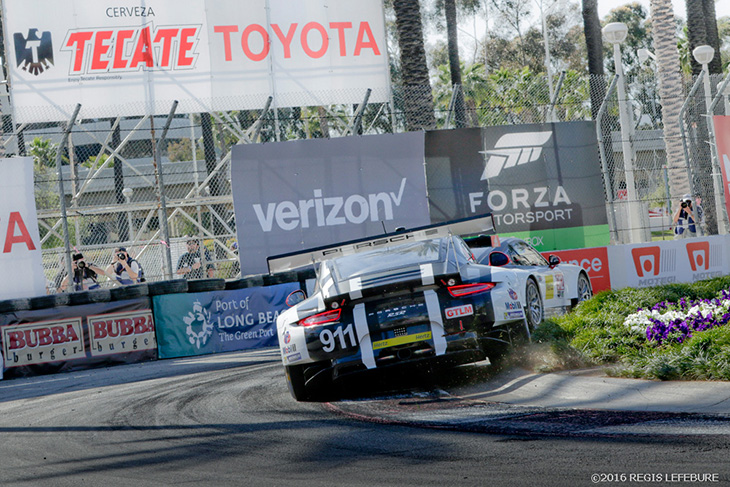 As the race neared its conclusion, Tommy Milner led in the #4 Corvette Racing Corvette C7.R. With only a few minutes remaining, Frederic Makowiecki in the #912 Porsche made contact with the Corvette and both cars spun, allowing Tandy in the #911 to slip by for the victory.

“It was definitely the most eventful win that we’ve had,” said Tandy, regarding the ups and downs that the team experienced in the race. “Coming from things going badly, and very badly, to then bouncing back and finishing with a victory.”

For the first half of the race, it was a trio of white cars, the two Porsches and polesitter Bill Auberlen in the #25 BMW Team RLL IHG Rewards Club BMW M6 GTLM, who controlled the lead. However, penalties for each of those cars (the #25 serving a drive-thru for an incident on-track with a PC car; the #911 and #912 entries receiving stop-and-go penalties for speeding on pit road) turned the lead over to the pair of Corvettes near the midway point of the 100-minute race.

The #62 Risi Competizione Ferrari 488 GTE climbed to its first podium of the young season after qualifying eighth for the race. Giancarlo Fisichella found himself on the podium for the second consecutive year after the team completed the sprint race in third, while Toni Vilander was third in 2011.

The Ford GTs made their debut on at Long Beach, with the No. 67 Ford Chip Ganassi Racing Ford GT rebounding from a mechanical issue that resulted in a fire on-course during practice on Friday to finish fourth. The car, which was unable to qualify on Friday due to the damage, was driven by Ryan Briscoe and Richard Westbrook.

Ganassi’s #66 Ford GT entry suffered a penalty for speeding on pit road during an early driver change, and Joey Hand and Dirk Muller brought the car home in eighth.

The #912 finished the race in seventh while Auberlen and Dirk Werner wound up fifth after their early penalty in the pole-sitting car.

With their second place finish in the race, Gavin and Milner unofficially increased their lead in the standings to 18 points over the four drivers in the #912 and #25, who are tied for second.