The ELMS season opening 4 Hours of Silverstone saw a number of debuts for drivers and teams, but one of the teams that made their debut might be a surprise to some.

The late addition of the #96 Aston Martin Racing V8 Vantage GTE rather hid the fact that this was not an AMR entry, but rather the first foray into contemporary sportscar racing from the ROFGO team.

ROFGO is owned by businessman and gentleman racer Roald Goethe whose previous racing efforts have been in conjunction with AMR (WEC 13/15) (the car is seen beliow in Bahrain in 2013) and Gulf Racing since ILMC 2011 (Roald still owns a 50% stake in Gulf Racing).

The crew was a gathering of the ROFGO clans including Stuart Gale, who was the AMR engineer for the #96 Aston Martin in the 2013 and 2015 FIA WEC, Jimbo Chown who looks after the Classic Racing side of ROFGO and Stuart Hall, doubling up as crew member and driver.

Stuart Gale incorporated his engineering company Venture Engineering, into the effort, one of that proud breed of successful British motorsport specialist engineering concerns, Venture already have a presence in WEC and F1 but also do quite a bit of work for ROFGO. Stuart’s business partners Adrian Perkins and Joe Lofthouse were also instrumental in helping set the weekend’s programme up.

Stuart Hall completes the picture:  “It was a very late call to do this.  We shook down the Aston at Silverstone on the Tuesday and that was the first time the car was run in anger since the end of the WEC in Bahrain and the first time Roald and I had driven it at all since then. We certainly didn’t test like most of the other teams have over the winter.”

The shakedown test went well and by the weekend’s track action the Aston Martin was well on the pace, with it’s Targa Florio inspired Gulf livery proving a real head turner.

Roald and Stuart Hall were joined for the weekend’s action by AMR factory man Richie Stanaway and the Kiwi ace lived up to his form by putting the car on Pole Position. 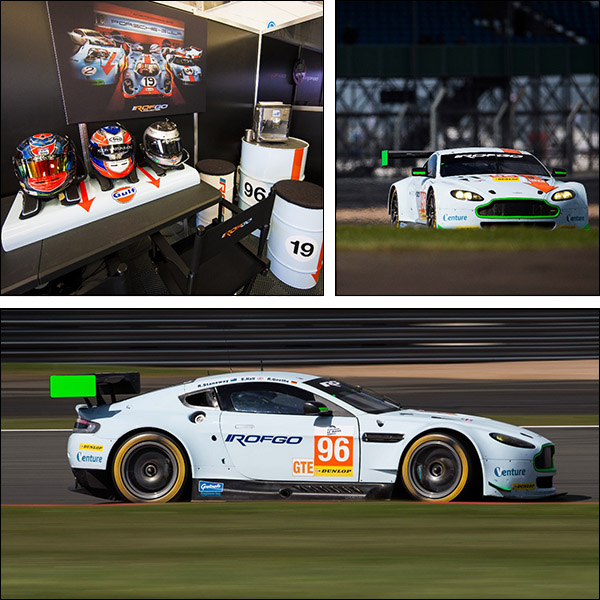 The race itself could easily have been a very different story. Endurance racing is a team discipline and the ROFGO crew was entirely untested as a unit.

“The pit crew led by Jimbo Chown had been together for just days, but performed faultlessly, the car was in the mix throughout, our pit stops were fast and faultless.”

Behind the scenes the ROFGO effort was leaning heavily on its own values rather than the AMR brand:

“We try to pride our selfs on a family friendly atmosphere. It’s not a factory team, we’re privately funded and we firmly believe that the better, more relaxed and happier the garage is, the faster and more productive the team will be.”

It paid off, the car up in the lead early on in Stuey Hall’s hands and when Roald Goethe climbed aboard for his long-haul stint he found a sweet spot.

“It was the best Roald has ever driven. His lap times very comparable to the other Am drivers and not making a single mistake.”

It showed on the timesheet too. When Richie Stanaway climbed aboard for the race to the finish a solid fourth place looked assured. 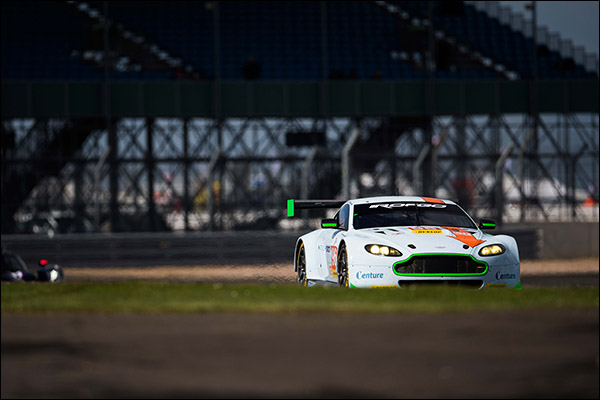 That wasn’t enough though for the Kiwi, and soon enough the timing screens painted an emerging picture, a podium was in reach, but it would be very, very tight.

The overall leader added spice to the situation, crossing the line three seconds before the checkered flag was due, that gave the fight for third place an additional lap, and Stanaway by now was right with the Ferrari ahead.

As the car came screaming down into the final to corners Alessandro Pier Guidi was watching his mirrors, the Aston was right there, a move to defend the best line into the penultimate corner left room up the inside, a compromised line into the turn, but a way through to the lead.

Stanaway took the opportunity and was well alongside the Ferrari before the Italian realised the move was underway (the video screen grab below marks the first point where was definite contact), he moved to defend, too late, and effectively took himself out of the race, the Ferrari spun around and off track, the Aston though was wounded too, the front right wheel askew, the New Zealander managed to rejoin the track and stagger across the line. 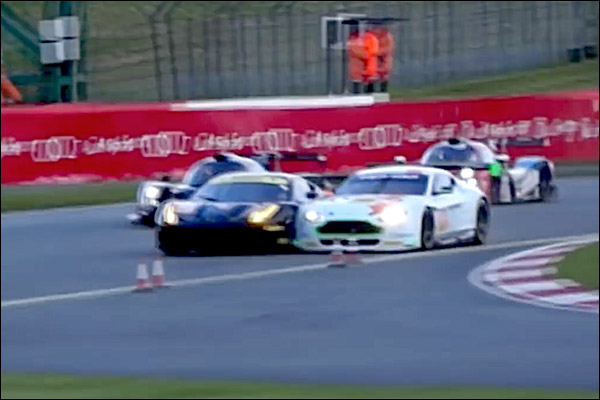 The Aston finished third on the road, with the Ferrari recovering to cross the line more than three minutes later.

Post race though the drama continued, the race stewards deciding the Stanaway’s move had been avoidable contact on the part of the Aston man, a 4 minute time penalty reversing the positions of the battling pair, the #96 was classified fourth.

(Amateur footage from trackside seen by DSC entirely supports the account above. The Aston Martin remained on track at all times up to the impact and the Ferrari moved into the #96 before the corner).

Much later in the day the stewards made a further decision, this time to exclude the GTE class winning JMW Ferrari, now the ROFGO boys were back in a podium position:

“We feel that the post race penalty was harsh for Richie’s move, so to get P3 back I think is what we deserved.”

And it’s just possible that a good racing result for the team might pay dividends in terms of further outings.

“The plan now is to do more modern racing with ROFGO. We are looking at further ELMS outings but that’s yet to be decided. Also GT3 is an option, (Roald and Stuart are currently competing in the 24hour Series aboard a Ram Racing Mercedes AMG GT GT3).

Before then though, next on the calendar for ROFGO is a date in Monaco for the Historic GP, and then the Le Mans Classic where Goethe and Hall will be campaigning, and no doubt enjoying a number of the ROFGO Collection’s stunning inventory of historic racers:

ROFGO Racing is on the up, watch this space…