The second round of the VdeV Endurance Series took place on the Bugatti circuit on april 23rd & 24th.

In CN prototypes, the four-hour race (instead of the usual six-hour long format) takes place on Saturday. Three different cars were entered, the main being the Norma M20 FC and the Ligier JS53 Evo 2. The third type of car, the Tatuus PY012 had a lonely entry. Twenty-two cars were present in the second round.

Cochet (Norma #31 / CD Sport) set pole position and took a good start, leading at the beginning of the race, but not for long, being overtaken by Ferté (Norma #2 / TFT). On a strategy decided by Illiano, one of the three drivers, he quickly make the first of the five mandatory pit-stops.

The lead was then inherited by Perroy (Norma #21 / DB Autosport) who built a 34-second advantage at the end of the first hour. Due to the different pit-stop strategy, the leader at mid-race is the British-driven Ligier, with Williams and Sanders at the wheel. Fourty seconds behind are Delafosse, Dannielou & Petersen (Norma #22 / DB Autosport), with the fastest lap so far. The 2015 champions, Maulini, Bole Besançon & Foubert (Norma #32 / CD Sport) complete the podium, 1:29″ behind the leader and Vilariño, Ferté & Illiano with 7 seconds more.

The order between the three leading Normas doesn’t change during the third hour while the Ligier #26 drops from 1st to 4th. Capillaire, Lacoste & Da Cunha set the fastest lap during the 3rd hour, climbing at the 8th place with one hour to go. They continued to climb to 4th place at the checkered flag.

The Norma #22 suffered a gear change problem and falls to 3rd place. The Norma #32 then led until they had to make their last pit-stop. Their advantage over the Norma #2 being not big enough, Vilariño, Ferté & Illiano can receive first the checkered flag. It’s the second straight win for the TFT entered Norma.

“My team puts me in charge of the race start and then it’s all down to me !”, laughs Alain Ferté, jumping out the car. “On a more serious note, this victory is the reflection of the immense work it took from the team to put the car back together after an accident in qualifying. It’s thanks to Philippe Illiano, who thought up the strategy, that we chose to complete all the drive throughs at the beginning of the race, it paid off in the end. We never get tired of winning, so hopefully this is the start of a trend !”

“It’s a great feeling”, confirmed the young (17-year-old) Jordan Sanders. “We performed some quick lap times and that really makes me happy. We really didn’t expect to finish where we did, especially as it’s our second meeting, but the team has done a fantastic job in preparing the car and our goal was to attack from start to finish. I really hope from now on we can fight inside the top six and finish at least sixth in the championship.”

Twenty cars were entered in the GT / Tourism / LMP3 / PFV (!) race. For the first time, a LMP2 is entered in VdeV, driven by Tinseau & Sausset, to prepare the latter for the 24 hours of Le Mans. This June, they’ll drive the Morgan prototype with Bouvet, but this weekend they race against him, as he drives the Visiom Ferrari. In GT, the Vortex makes its first race.

Of course Tinseau set the fatest lap, but the grid being set with the average lap of the drivers, Tomlinson & Simpson (Ginetta #57 / Team LNT) took the pole. First LMP3 was the polish Ligier #13. At the green flag, Tinseau easily takes the lead, but the safety car has to go out before the end of the first lap, as Robertson (Ginetta #55) is stopped in the Musée corner, unable to restart.

Back to green, Tinseau ran his stint leading. The polish Ligier is the first of the P3/PFV prototypes, thanks to a good showing from Smiechowski. Tins eau handed over to Sausset, but soon a light rain becomes to fall. Sausset is one of many drivers to go out of the track. He touches the wall. The damages to the car are light, but big enough for a long repair in the pits. At the middle of the race, the polish Ligier not only still led the class but also the race, ahead of another JS P3, the #888 driven by Trouillet, Dagoneau & Rosselo and the #57 Ginetta. Same cars but in a different order one hour later, the #57 Ginetta being faster, building a one minute gap on the #13 Ligier. The Top three positions don’t change during the last hour. Tinseau and Sausset finish 15th and last classified car. The best lap of the race isn’t set by the Morgan LMP2, as Robertson is 0″019 faster.

In GT, AF Corse’s Ferrari was the early leader, until it received a drive-through for not respecting the track limits. The Visiom Ferrari had a puncture, which was good for the Speedcar entered Audi R8 LMS ultra, that led at the end of the first hour. But it then had a puncture too, making it spin at the entrance of the Dunlop curve. The lead is then taken by AF Corse’s Ferrari, driven by Montermini & Cordoni, ahead of the Visiom entered 458 driven by Pagny. 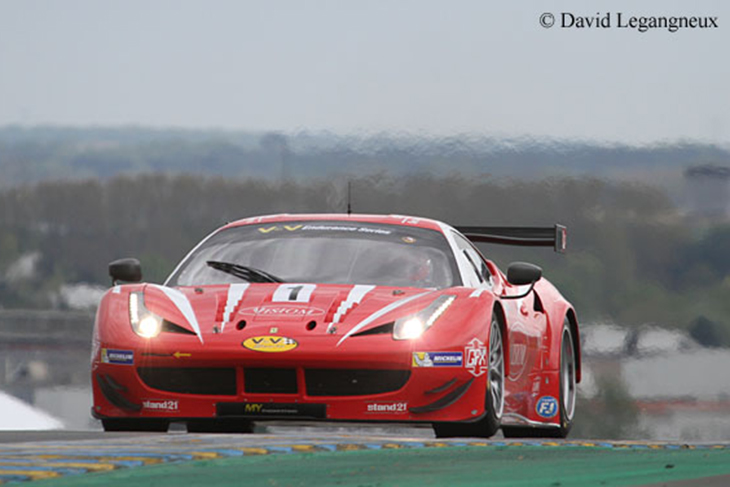 AF Corse still led at the end of the third hour. The last stint sees Montermini fighting with Bouvet. Despite being one minute behind with one hour to go, Bouvet can reduce the gap. He overtakes just before the last safety car and keeps the lead until the checkered flag. The GT winner finished 5th overall. The Renault RS01 #11 lost the 3rd place after a contact with an LMP3, the GT podium being completed by the Dodge Viper GT3 R. 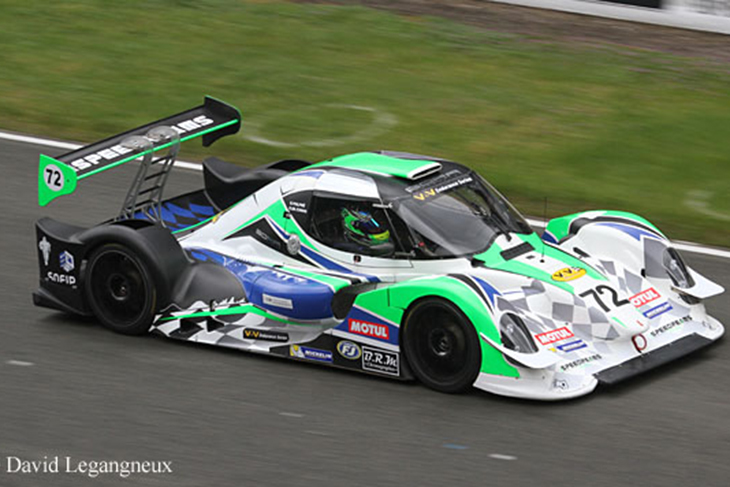 A few days after it was definitely known for sure that Pescarolo branded prototypes were a thing of the past, the last animal of its kind (the lonely LMP2 used a Pescarolo 01 tub but was branded as a Morgan), a Pescarolo 02 was entered by Speedreams Racing.

It retired before the end of the first hour.