There are racing cars, that characterise a whole era. Racing cars, that cast a spell over crowds with their looks, their unique engine sounds. It was exactly such a moment, when Mercedes launched the SLS AMG GT3 back in 2011.

The modified road car with its gullwing doors that became a racing car and was at once favourite not only with the customer motorsport, but also with the fans.

The SLS brought home countless successes in its five active years in Motorsport and is regarded as one of the most reliable racing cars in GT3 racing these days. Someone, who experienced the SLS for many successful years is German racing driver, Hubert Haupt.

The 47-year-old Business Man from Munich and former DTM-Pilot returned to Motorsport in 2012 following a short break and has competed in long-distance racing ever since. Haupt burst onto the Motorsport scene in 1990 as a professional racing driver and was able to ran against the best drivers on the grid.

Even today, after so many years in racing, he brings an unbroken fighting spirit and ambition to every race track he goes to, even if it is just for fun these days. His victory at the 24-hours-race in Dubai was outstanding (below), the victory at the 6-hour qualification race on the Nordschleife almost more emotional, both from last year. 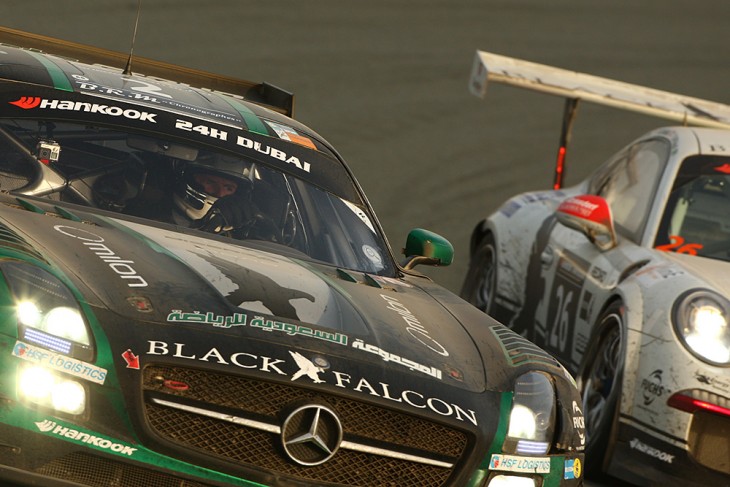 Even more incredible could be a podium finish or a victory with the new one, the successor of the very successful SLS AMG GT3. It looks smaller, almost slender, but the new Mercedes-AMG GT3 is packed with the perfection of well-engineered technology. The new racing car developed by both Mercedes and AMG ranks right at the top of the favourites for this year.

“The SLS was more a development taken from the basis of the road car, but taking this into consideration, it was a very good racing car”, reflects Hubert Haupt in hindsight of the SLS. “But you were not able to drive the SLS like you would do with a pure racing car. You had to be soft with it especially at the corner entrance. You could not be driving as aggressively as it is more or less normal with any other race car.”

Haupt, who drove the SLS in 2011, 2013, 2014 and 2015 competing in the Blancpain Endurance Series and VLN Championship, sees the new Mercedes-AMG GT3 as an innovation, which was pending on the horizon for some years.

“The GT3 Motorsport has massively developed on a professional level over the past three years. Manufacturers see this type of Motorsport as platform and invest to be present. I think, this was the reason behind the decision of Mercedes to take this step into customer racing. There are now eight or ten manufacturers running in GT3, who all build pure racing cars, because GT3 Motorsport is exceptionally exciting.”

It is impossible to compare the new Mercedes-AMG GT3 with the former SLS, although its appearance is just as good as its successor. But this time, Mercedes and AMG went to design a pure, stand-alone racing car, that is not just a converted road car as the SLS used to be.

“The cars feature a great deal of aerodynamics these days and gain their high level of performance”, says Haupt. “The cars are extremely agile and our new Mercedes-AMG GT3 is exactly that. It is incredibly precise on the front suspension when turning into a corner. You just feel you got a real race car underneath. When you do small changes to the car, its reaction is very sensitive and that is really what it should be all about, what you like about racing cars, these are the main differences to the SLS.”

The new Mercedes-AMG GT3 also showcases the current spirit of the moment, because all manufacturers have invested a lot of many into the development of their cars.

“The GT3 cars we know from today are no DTM race cars, but from an aerodynamic point of few, there is not a lot missing. In previous years, GT3 racing cars were all just adapted road cars.”

But in the end it does not matter in which racing car you sit behind the wheel, the last squeeze, the decisive tens of a second are down, fortunately, still to the driver. “The modern racing cars are fairly easy and simply to drive, but when it comes down to the last second, you really have to search for it and work hard to get it, but that is the same for everyone.

The Mercedes-AMG GT3 is very reliable, the brakes are top, the aerodynamic and the steering behaviour are very good. This car takes you to a good level very, very quickly, but to get the last bit out of the car, the last tens that decides between victory or defeat, you have to work on it yourself as a driver! 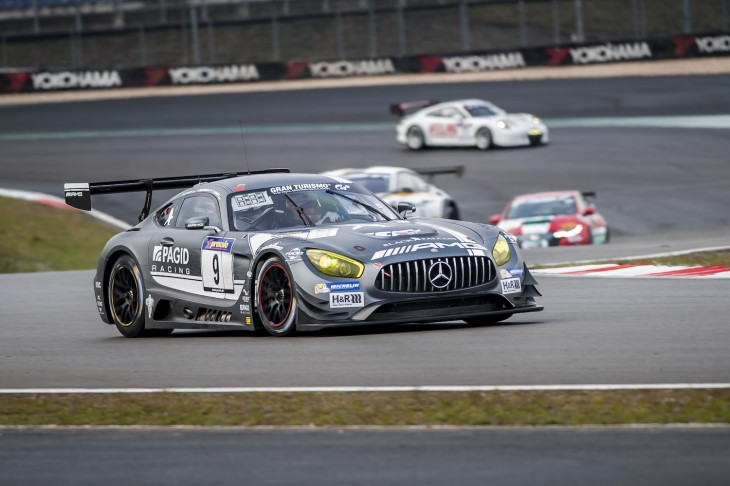 With the 24h-race this coming weekend at the Nordschleife, the worldwide most exciting, greatest and exhilarating 24-hour-race takes place. And with that, one of the highlights for Haupt this season.

“My personal highlights this year are the two 24-hour-races at Nürburgring and Spa. Last year, we finished in 5th place with the SLS and were the best-placed Mercedes at Nürburgring. This year we have a clear goal: first of all, to finish the race, and secondly to climb onto the podium. I think, it is a realistic goal with the car, the team and the great support by AMG.”

All eyes will be on the #9 Black Falcon Bilstein Mercedes-AMG GT3, with Haupt taking part in the traditional 24h-race, the unique rollercoaster ride through the green hell, for the fifth time. Hubert Haupt, one of the aspiring candidates for victory.