FIA WEC CEO Gerard Neveu and ACO President Pierre Fillon visited the 100th running of the Indianapolis 500 last weekend and Marshall Pruett has established that it was far from a courtesy visit.

“We have plans to return here with Andrew Craig (Above centre, pic Marshall Pruett) to discuss with the people from Indianapolis,” Neveu told Marshall while standing on the Indy 500 grid.

The visit offered the opportunity to compare and contrast the approach made to the race meeting at Indianapolis, both with the pageantry in downtown Indy nd on race day at the iconic track, with a view to taking some lessons back to Le Mans, and to other FIA WEC meetings.

“It’s absolutely unique,” Neveu added. “Since the beginning of the story of the WEC, there is another big race you have to visit one day, the 500. We found the right opportunities here, so we are doing it and it is great.

“This race is one thing you can do in America [but] probably not in another place, because you understand very quickly that fans are part of the show. There’s good discipline, large entertainment starting at the beginning of the week.

“There are many points similar at Le Mans regarding the enthusiasm, regarding the proximity between the fans and the paddock. We can say that this is two parallel events with a lot of sister events, for sure. Different cars, [so there’s] nothing to compare there, but all around this is very similar. We learned a lot because this is an American approach of motorsport and there’s some very good ideas that we can try to develop ourselves for Le Mans.

“As you know, Le Mans is always looking for innovating for the fans, for the technical rules, for the competitors. And that is the idea [behind this trip]. Enjoy, first, I have to say, but just to feel the spirit, to understand. The third idea is maybe is why not one day bring the WEC here? It makes sense.”

“I think there’s a lot of ideas to take here, but [Saturday] when I come inside the track, you know you have something, there is a feeling,” Fillon said. “It is the same at Le Mans. You can feel the story, you can feel the soul and it was my first impression with everything we saw. 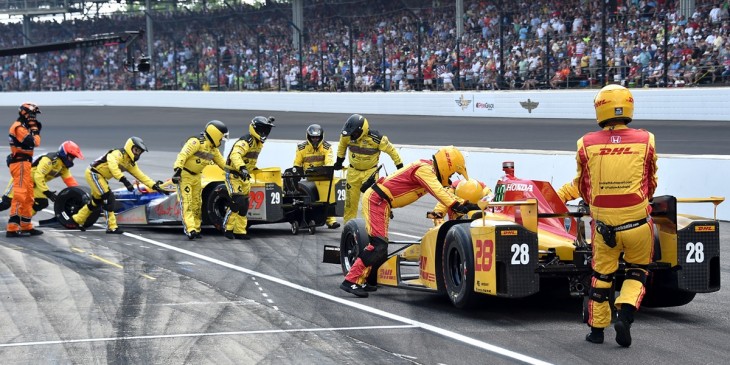 “There are three big races in the world. You have the Grand Prix of Monaco, you have Indianapolis and you have the 24 Hours of Le Mans. I went to Monaco, I went to Le Mans and it’s my first time at Indianapolis, and I’m very, very happy to see this.”

The question of a potential future FIA WEC race at Indianapolis arises once again with efforts to grow the size and popularity of the WEC’s visit to the Circuit of the Americas seeming to have hit a glass ceiling, the series could be on the lookout for a new venue after this year’s race.

It certainly adds real spice to an upcoming return visit by the WEC hierarchy to Indy to discuss a possible event on the fast and smooth IMS road course, but there could be a significant hurdle to clear before sportscar fans begin booking travel to Indiana in 2017.

As a new circuit, COTA was eager to attract big international series and spent freely to sign Formula 1, the WEC, MotoGP, and even V8 Supercars after the circuit opened a few years ago. But with COTA’s diminished annual budget, and lukewarm local response to the most innovative racecars on the planet, the relationship with the WEC has seemed destined for a conclusion.

The major potential complication to finding a successor host at Indy is the sanction fee requested by the WEC with sources suggesting that the amount currently suggested would need to come down from the unrealistic figure made available by COTA.

The NASCAR-owned IMSA series made its final appearance in front of an empty house on the IMS road course in 2014, and with NASCAR’s Brickyard 400 serving as the second largest annual event at IMS after the Indy 500, any deal between the track and the WEC would have to hold the promise of much greater fan turnout and financial benefit for the Speedway.

If the financials are right, and the WEC can bring a bigger crowd to Indy than COTA has produced in three tries since 2013, the event could make sense.

With Chevrolet and Ford located 250 miles north in Michigan, and American corporate headquarters for Audi, Porsche, and other WEC staples within a reasonable distance to the Speedway, the marriage of IMS and Neveu’s manufacturer-driven series could be a fantastic fit.

“The very common point we can feel since the beginning of the weekend here is that I think the people from Indy and the people from Le Mans, we have exactly the same concern about the fans,” Neveu said of wanting to create a bigger and better spectacle.

“The idea we are searching for is how can we make them happy because all the things we’re doing is for the fans. We love the way they do it [here]. It is amazing.”

This story originally appeared on Racer.com