Summary: The rain came down hard before the start of the first hour, with the organisers opting to start the race under safety car, which would stay out for most of the hour. When it came in, Mike Conway charged to the lead.

LMP1: Conway charges to the lead

When the race eventually started, the action was frantic, and Porsche relinquished its lead to the charging #6 Toyota of Mike Conway. 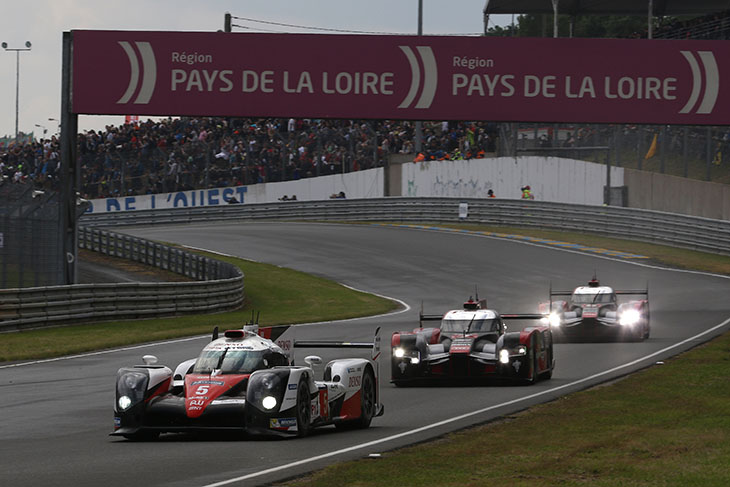 With the race starting under safety car, there was little to report for the first six laps of the 84th running of the Le Mans 24 Hours. The only LMP1 car which didn’t take the start was the ByKolles CLM which underwent repairs in the garage throughout the build up, but did emerge from the pitlane before the end of the second lap of the race.

On lap three, still under safety car, the #12 Rebellion R-One of Nick Heidfeld was pushed back into the garage with an issue. The mechanics immediately began working on the rear, focusing on the ignition system. When the car rejoined, it was three laps down, and with Nelson Piquet Jnr at the wheel.

When the safety car came in, the pair of Porsche 919 held station at the front, with Neel Jani in the #2 leading the #1 of Timo Bernhard.

By the team the frontrunners reached Mulsanne Corner for the first time under racing conditions the battle for second was on, with Mike Conway all over Bernhard in the #6 Toyota TS050. His teammate Sebastien Buemi in the #5 though, slipped back behind both the #7 and #8 Audis to sixth.

Conway couldn’t find a way through though, and fell into the clutches of a hard-charging Andre Lotterer in the #7 Audi, who tried to take third off the British driver going up to the Dunlop Bridge.

Still no moves, but it turned quickly into a four-way scrap, with Conway waiting until the exit of the second Mulsanne Chicane to slip past Bernhard for third. By the end of the second lap of green flag racing racing, it was the #6 Toyota of Mike Conway that emerged in the lead, after blasting past the #2 Porsche. Third was the #1 Porsche with the #7 Audi close behind.

The pit stop cycle began at the end of the first hour, with G-Drive Racing holding the lead. 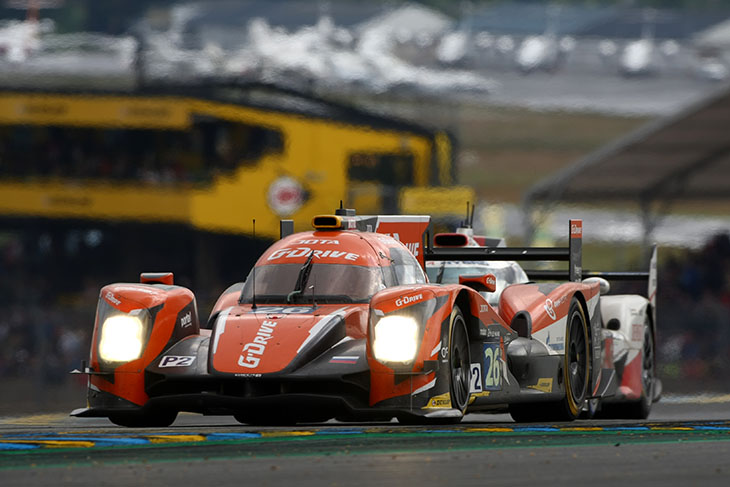 Instructions came on screen for car #30 to give back a place to the #22; the other ESM Ligier perhaps having eased ahead of the So24! Ligier amid the confusion of so much spray. Car #27 (SMP Racing) also instructed to overtake the #28 (Pegasus Morgan-Judd). This was not how the Le Mans 24 Hours was supposed to start, with the only overtaking coming on the instructions of race control!

Twenty minutes gone and the rain had eased, but the track conditions remained difficult. Five other P2 cars chose the safety car as an excuse to pit, including the #27, #28, #30, #22 and #40. All managed to do so yet, critically, retained their positions on the lead lap.

Half an hour into the ‘race’, and the fastest lap, officially, had been set by the #22 Spo24! Ligier, Vincent Capillaire in the cockpit, at a mere 7:38.177. That may be something for the pub quiz in a few year’s time. The rain had officially dropped to below “Level 1, which is effectively negligible.

Astonishingly, the crowd was heard to be whistling and booing as the safety car brought the leaders through to begin the sixth lap.

Simultaneously, a handful of P2 cars entered the pitlane, including the #49 Michael Shank (great livery, by the way!, #33 Eurasia Motorsport and the #25 Algarve Racing Ligiers. It was a lengthy stop for the #33 (Tristan Gommendy) but, as before, no loss of the lead lap for any of these cars.

Into lap seven, and the #30 ESM Ligier was back for a second visit to the pits, and a fresh set of intermediate tyres, before Johannes van Overbeek rejoined. Next time around and the #33 Eurasia was back into the pitlane, this time wheeled backwards into the garage. At the same moment, the announcement came onto the screens that the safety car would be in at the end of the lap.

15:52.15 and the racing finally got under way, and Richard Bradley pitted the #47 KCMG from the P2 peloton, and was briefly blocked by the retreating safety car, effective leaving the #48 Murphy Prototypes Oreca as tail-end charlie in LMP2, with Ford GTs chasing hard.

With racing finally under way, another flurry of pitstops as those who hadn’t previously taken on intermediates decided that full wets were no longer appropriate footwear. Only seven P2 cars stayed out on the lead lap, including René Rast in the leading G-Drive Oreca #26, with Lapierre second in the #36, and Panciatici third for Baxi DC in the #35.

GTE: Porsche gets ahead in both classes after safety car

During the few minutes of green-flag racing at the end of the first hour, a charging Fred Makowiecki and Patrick Pilet took Porsche to the top of the GTE Pro field, at least half of which was running almost nose-to-tail. Muller and Pla’s Ford sat third and fourth, with Calado fifth in the #51 Ferrari and Christensen sixth in the #77 Aston ahead of Bird in the #71 Ferrari. Porsche took the initiative in the GTE Am, too, with Wolf Henzler heading the field there at the stroke of 4pm after a battling few minutes at the wheel of the #78 KCMG car. 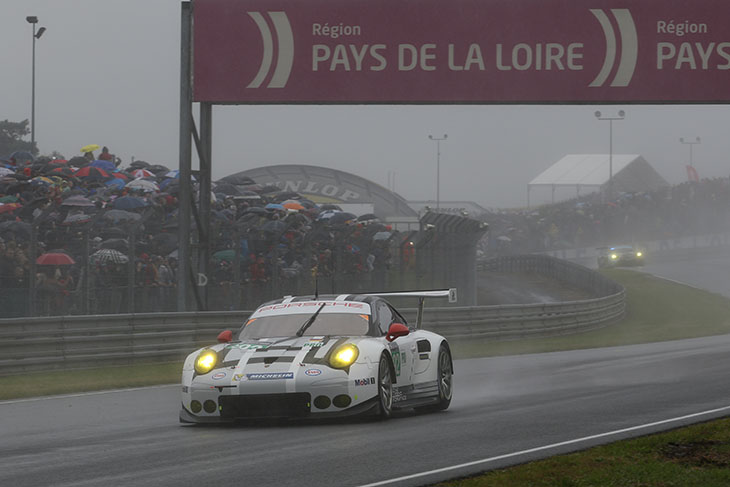 At the start, fourth place on the grid was empty, as the #67 Ford, due to be started by Andy Priaulx, was wheeled into the garage with a reported gearshift problem. “It was losing pressure on the reconaissance lap, so we were struggling to change gear,” reported co-driver Harry Tincknell.

That meant the #68 and #69 Chip Ganassi GTs led away under the safety car, with the #51 Ferrari third, the #66 Ford up a place in fourth and the #71 Ferrari was bumped to fifth. In Am, Rob Bell was at the wheel of the polesitting #61 Clearwater Ferrari.

The #67 Ford’s pit stop for its gearshift issue saw it re-enter the race two laps down, with 15 minutes having been run under the safety car. Seventh-place starter in Am, the Formula Racing Ferrari, also pitted under the safety car, changing to another set of wet tyres, but leaving starting driver Mikkel Mac on board.

Bell pitted the Am-leading #61 Ferrari during the safety-car period for fresh wet-weather tyres and a top up of fuel, a similar strategy to the #61 above. The Larbre Corvette and Scuderia Corsa Ferrari did the same a lap later, but were held at pit exit before the next safety car came around. 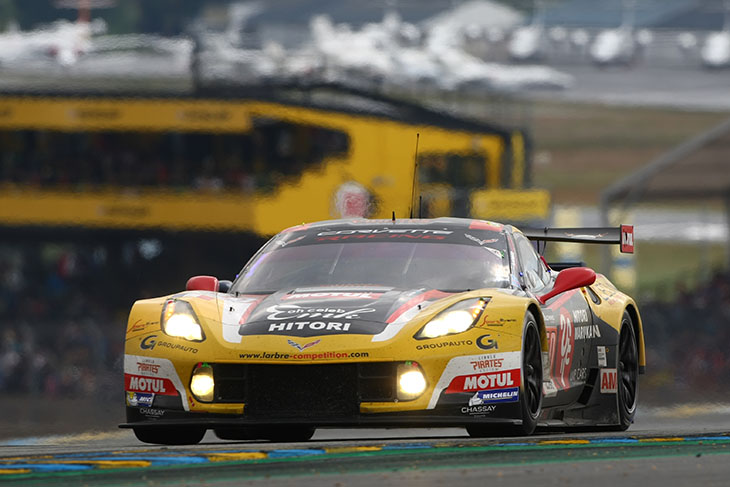 After the first racing lap, almost a full hour into the race, Makowiecki in the #92 Porsche passed Fisichella in the #82 Ferrari on the run up to Dunlop, while going into that corner, Darren Turner in the #95 Aston lost places to Pilet in the #91 Porsche, Christensen in the #77 Porsche and Gavin in the #63 Corvette. Meanwhile, the #89 Weathertech Porsche, running two drivers due to Cooper MacNeil’s illness, came into the pits to change to slicks.

Makowiecki and Pilet’s charge eventually took them to the head of the Pro class, while in Am Henzler in the #78 KMCG Porsche passed and then pulled away from Pat Long in the #88 Abu Dhabi car.