Summary: With seven hours remaining, the race was beyond tight in LMP1, with a series of accidents causing a safety car that resulted in the top three finishing the hour with three seconds between them.

Eight and a half hours remaining, and it was still so tight at the front. When the #6 Toyota and #2 Porsche were out of sync, there was just six seconds between them, with Stephane Sarrazin continuing to push and Romain Dumas waiting for the TS050 ahead to pit for its 18th stop. 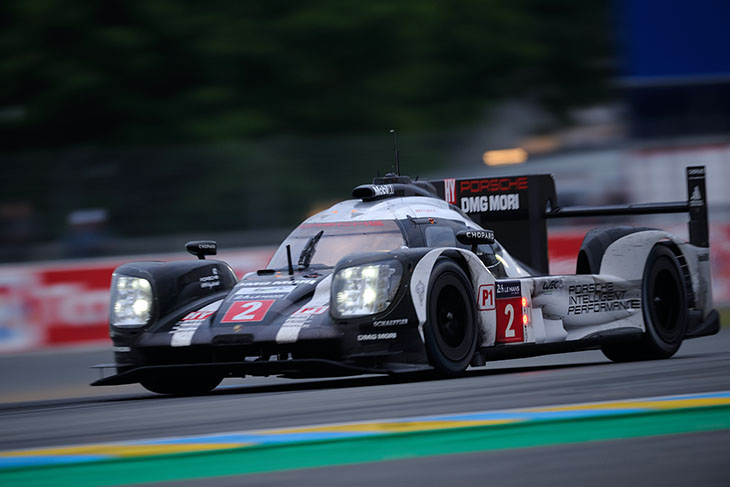 Down in third, the #5 Toyota of Kazuki Nakajima was a further four seconds back, but had to pit before the #6, spacing the top three out.

When Tommy Milner’s incident brought out the slow zone at turns 1 & 2, the #6 and #2 came in immediately from first and second. After the stops the #6 rejoined the race first, 17 seconds ahead of the #5, and 26 ahead of the #2 which had a longer full service stop, with Neel Jani jumping back in as Marc Lieb wasn’t ready.

Shortly after, Simon Trummer was forced to retire the #4 ByKolles CLM; the car caught fire running through the Porsche Curves. With just 200 laps completed to that point, it had been a troubled run for the private entry.

That, plus a series of incidents in LMP2 prompted the fourth safety car period of the race as the final seven hours approached; the gap between the top three when it was deployed shrunk to just five seconds. Toyota opted to pit both cars though under the caution, leaving Neel Jani to take over the lead of the race.

The race went green again with seven hours and 12 minutes remaining, and Jani’s lead due to the pair of safety cars splitting up the field was one minute. Conway and Buemi ran in formation through the traffic, and began to hound down Jani. The duo were drafting each other down Mulsanne, and Buemi actually dived u the inside of Conway to snatch second spot in the #5, at the second chicane.

It then became a Toyota 1-2 as the 17th hour concluded, when Jani pitted and rejoined just behind the two Toyotas. With seven hours remaining, there was a three-way on track battle for the lead of the race. Incredible.

Early into the sixteenth hour, and there was a major development in LMP2 involving the #38 G-Drive Gibson being driven by Simon Dolan. After a sterling drive that had seen the open-topped chassis working steadily up through the field, the orange Gibson came to grief on the exit of the first element in the Ford Chicane. Scuttling hard across the kerbs, and then slithering with wheels locked, the car nosed heavily into the tyre wall. It soon became obvious that the very visible bodywork rearrangement hid more serious damage within. Judging by the way Dolan struggled to control the car’s forward movement, it would seem likely that the suspension had also been damaged.

The car had been running in a healthy and determined 4th place, but that was instantly lost to Panciatici in the #35 Baxi DC Alpine, and others followed through just as quickly.

By twenty-past six, and with the stricken #38 crabbing back slowly towards the pitlane, Nick Leventis snicked through Ford to claim fifth for Strakka. These were all the most significant changes to have taken place in LMP2 for several hours.

Out at the sharp end, as other pitstops came into play, the lead enjoyed by the #36 Signatech Alpine took a dent, but emerged far from threatened by the next round of pitstops. The best part of a full lap is a useful buffer to have, and Richelmi had that, and a bit more.

Just before the half-hour, a very slow in-lap for Bruno Senna, followed by a nine minute pitstop, saw the #43 slump from the middle order of P2 all the way down to 30th position overall. No explanation was forthcoming. Meanwhile a regular pitstop from Nick Leventis allowed Ladygin in the #37 SMP Racing through to fifth in class, 10th overall.

Race Control revealed that an incident between the #38 G-Drive Gibson (Simon Dolan’s car) and the #98 AMR V8 Vantage was “under investigation”, but we weren’t aware of an incident, so will await further information. As we were considering this, Tommy Milner had a major off in the #64 Corvette, setting up a double-yellow through Dunlop.

Under cover of the yellows, several cars elected to pit, including the overall leaders in P1 and the P2 leader; Richelmi in the Signatech Alpine. He rejoined still with a 56 second lead.

As the clocks ticked over into the 16th hour we had another major incident to affect LMP2, following Simon Dolan’s accident at the Ford Chicane in the previous hour. This time the venue was the first Forza Chicane on the Mulsanne, where Nelson Panciatici just ran straight across the central gravel-trap and speared into the unforgiving concrete wall on the far side. The car gave all the appearance of having a rear puncture, effectively lifting one of the front wheels off the ground and losing all steerage.

The nearby marshals lifted the car clear of the gravel and set it down behind the relative safety of the wall, where Panciatici attempted to restart the Alpine. It was fairly obvious to those watching that the front-right suspension was utterly destroyed, and after a few minutes of persuasive talking from the marshals, Panciatici accepted the inevitable. It was game over for the #35.

Like skittles, the P2 cars were toppling over all round the track. On Mulsanne Corner, the #46 Thiriet by TDS Oreca, for so long a contender for the lead, and running in a strong second, appeared to clip the barriers on the inside of the corner, ripping bodywork from the car and then tripping over the bollards and kerbs before landing heavily in the gravel trap on the far side. Pierre Thiriet himself opened the door almost as soon as the car slithered to a halt, and began climbing slowly from the cockpit. With the car eased out of the cloying gravel by the marshals, Thiriet fairly quickly regained the tarmac, and devoid of any front bodywork, started heading back towards the pitlane.

At the same moment, on the far side of the track, near the what appeared to be the new gravel trap at Tertre Rouge, the #30 ESM Ligier went nose-deep into the gravel and nudged the tyres.

As if that wasn’t enough, the class leader was then hauled backwards into the Signatech garage. It wasn’t a lengthy stop, about four minutes, but the net effect was to tighten up the leading group in P2, with Richelmi’s advantage over the second-placed G-Drive coupé markedly reduced.

The safety cars were deployed almost immediately, and while they circulated, several teams called their drivers in for pitstops. Rast, of course, had set the #26 G-Drive on class pole all those days ago, and here it was, back in contention once again.

Having returned the #46 Thiriet by TDS Racing Oreca to the pitlane, the team worked furiously, striving to to make good the damage to the car in shortest order, and swapping Matthias Beche for the shaken Pierre Thiriet. The Swiss driver then headed off up the pitlane, anticipating a resumption of his race, but the departure was clearly somewhat premature. Luckily Beche hadn’t exited the pitlane, and when the car stuttered to a halt again, the engineers were able to sprint along the pitlane to retrieve the car, hauling it back by hand.

Racing resumed at 07:48, and while the Thiriet by TDS Oreca languished in the garage, those around it on the timing screens moved further ahead, or steadily crept up and overtook. As the race approached the end of this hectic and action-packed seventeenth hour, the Signatech Alpine maintained a lead of a lap over the #26 G-Drive coupé, being pushed hard by René Rast, with a further lap back then to Ladygin, holding third for #37 SMP Racing, but pitting just two minutes before the hour, a move that allowed Jonny Kane to close the Strakka Racing Gibson to within seven seconds.

The Risi Ferrari leads the #68 Ford by a tiny margin with 17 hours gone. It’s been a real dogfight between the two leading Fords and the sole contending Ferrari 488.

Back at the start of hour 16, the #98 Aston Martin was back in trouble pulling up on the kerbs at Mulsanne Corner, Paul Dalla Lana’s race not getting any easier though the car would be able to continue. The car was then under investigation by the stewards for speeding at the pit entry on its return.

The lead of GTE Pro was now in the hands of Toni Vilander. The #82 Risi Ferrari had been pushing the pace hard having gained an advantage during the last round of stops. The #68 Ford GT in second was ten seconds back, Scott Dixon’s #69 car still third. Nicky Thiim had taken over from Darren Turner in the #95 Aston Martin, hanging in there for fourth. 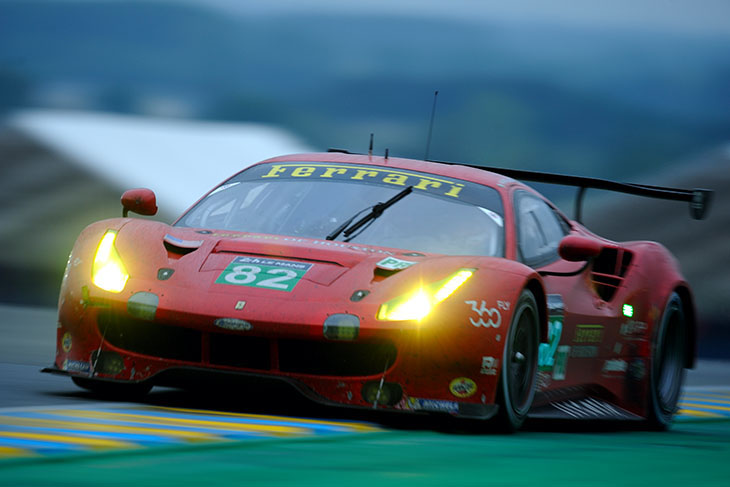 Jeff Segal’s marathon stint in the leading Am Ferrari continued, slick pit work by its crew giving the #62 car new brakes and sending the car back out still in front. Pat Long still held second place for the Abu Dhabi Proton car from the #83 AF Corse Ferrari, Collard now back aboard.

In Pro, both Scott Dixon and Nicki Thiim recorded their fastest race laps as the #95 Aston Martin tried to claw back time before its routine stop. 3:52.637 for Dixon vs. 3:53.293 for Thiim was clear indication of the performance gap.

Drama further back though as the #64 Corvette was in the wall after a heavy frontal impact. Tommy Milner went straight on going up the hill into the Dunlop Esses, the back of the Corvette visibly bouncing, its rear wheels locked. The car collided with the end of the tyre wall, Milner an absolute passenger but out of the car OK. This prompted a slow zone through the sector as the wrecked ‘Vette was craned away, the barrier repairs starting as the sixteenth hour drew to an end. 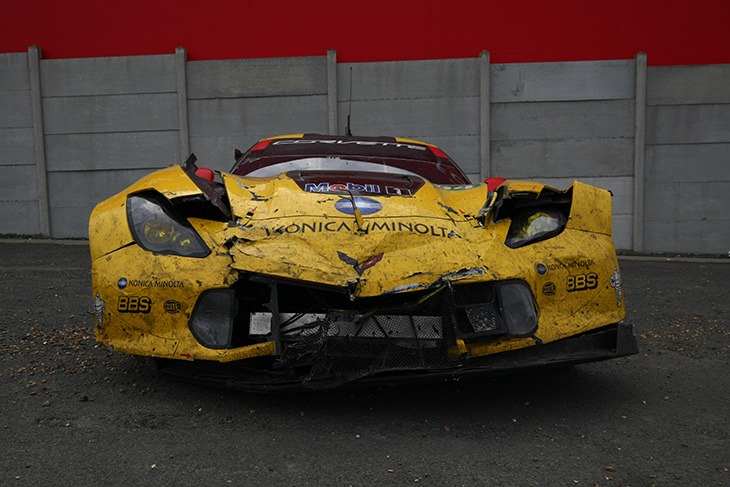 A lap’s gap between each of the top three in GTE Am now, the position was stable between Segal, pressing on in his Ferrari, Heinemeier-Hansson back aboard the #88 Proton Porsche, and Manu Collard’s #83 Ferrari. Weng Mok was running fourth in the Clearwater Ferrari, the Italian marque dominating the category. Matt Griffin was still plugging away in fifth in the green AF Corse car, with Michael Wainwright having bought the #86 Gulf Racing UK Porsche back up to sixth overnight.

The fourth safety car period of the race was given halfway through the seventeenth hour due to repairs at the Dunlop Curves and other incidents in LMP2. This allowed the #68 Ford to catch up to the leading #82 Risi car. Though the Ford’s pace had been strong in pursuit it was an unfortunate undoing of the work done by Fisichella and Vilander in the preceding hours.

As the safety car released the field Vilander got the hammer down, frantically looking for space in heavy traffic into the first Mulsanne chicane. Sebastien Bourdais didn’t get the best of the swarm of GT cars trying to get down to Mulsanne Corner either, the Ferrari more aggressive and able to stretch a small gap of four seconds going up through the Porsche Curves. Vilander was lapping two seconds a lap faster than Bourdais the gap extending to just over six seconds as the hour closed.