Colin Bruan managed to set his second consecutive PC pole at Lime Rock Park in Connecticut, and the overall pole for the Northeast Grand Prix. Braun’s session topping lap was a 48.824, just 0.016 ahead of the second quickest PR1 Oreca of Robert Alon.

“Obviously, I’m really happy to get the pole, but with the race being held in the heat of the day tomorrow, we felt qualifying as a good opportunity to evaluate the car and setup,” said Braun after scoring his seventh career pole in the PC class. “Saturday’s race is the most important thing here, and with limited track time, we felt this session was ideal to prepare for it.”

Lining up third on the grid will be the #38 Performance Tech FLM09 of Kyle Marcelli and James French, with the pair of Starworks entries making up the top five; the #7 ahead of the #8. In the session the top three were separated by just one tenth.

First of the GTLM runners in the PC, GTLM, GTD field was the #67 Ford GT which saw Richard Westbrook set the car’s best time. The Brit’s 50.748 was just about good enough to pip the #25 BMW Team RLL M6 of Bill Auberlin and Dirk Werner. 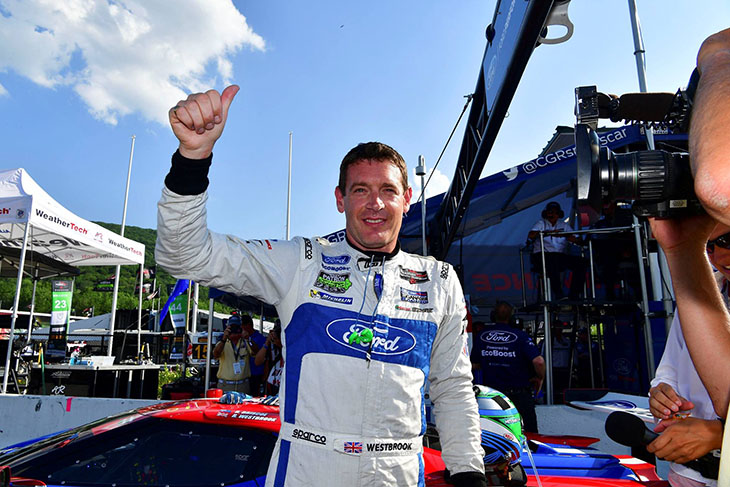 The #4 Corvette ended up setting the third best time, ahead of the Risi Ferrari in fourth. It meant that there were four manufacturers in the top four on the short 1.4-mile circuit.

During the session it looked as if Ford’s #66 GT was going to make it a 1-2 with Joey Hand driving, but the American’s best time, a 51.015, was only quick enough to slot in fifth in the class by the end of the running.

In what turned out to be a rough outing for the two Porsches in GTLM, the #911 and #912 will line up seventh and ninth in class respectively on the grid tomorrow. The best time from the pair was seven tenths off the GTLM pole time.

GTD pole was taken by Change Racing’s Lamborghini Huracan. Spencer Pumpelly set the car’s time, which was a 53.148, ahead of the two Stevenson Motorsport Audi R8s which made up the top three. Andrew Davis was second fastest in the #6 R8, a mere 0.030 seconds off Pumpellu with his tour of 53.178. Matt Bell set the time in the second of the team’s Audis.

Rounding out the top five was the Scuderia Corsa Ferrari 488 and the Paul Miller Racing Lamborghini respectively.