The first hour of the 2016 6 Hours of Nürburgring saw Porsche take the lead after the first round of stops, after a extremely quick in-lap for Timo Bernhard vaulted the #1 Porsche ahead of the #7 Audi which led from the start. Meanwhile in the opening stint, G-Drive Racing controlled LMP2, while Aston held a 1-2 in GTE Pro and the #88 Abu Dhabi Proton Porsche headlined the Am class.

Out of Turn 1 at the start of the race the two Audis raced off, but the #1 Porsche of Timo Bernhard ran around the outside at Turn 2 to take second place. The #7 Audi led the opening lap though. 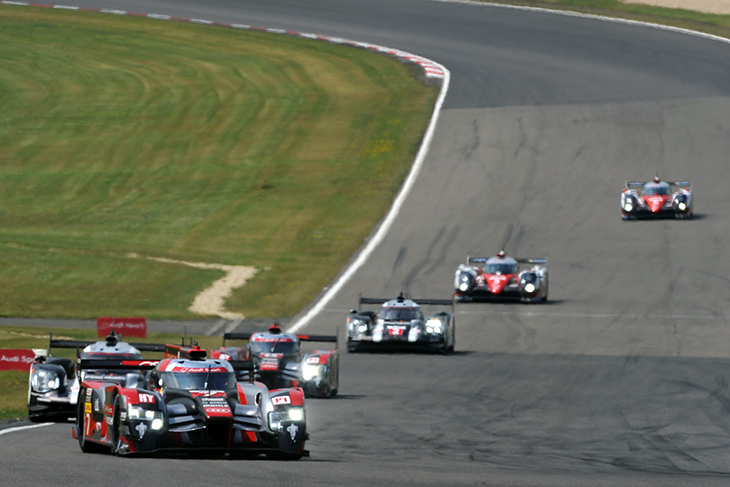 Down in the GTE Pro class, the #66 Ford GT of Stefan Mücke stole the lead of the class off the #95 Aston Martin which fell down to third, the #97 sister Vantage slotted in to second. LMP2 saw the G-Drive Oreca hold state up front ahead of the #36 Alpine and #42 Strakka Racing Gibson of Jonny Kane. The #88 Abu Dhabi Proton Porsche held the GTE Am lead

At the start of the second, lap, the GTE Pro battle was fierce though, as the #66 Ford slipped back to third place after a mistake, resulting in an Aston Martin 1-2 with the #95 of Nicki Thiim leading the #97 of Richie Stanaway.

Marcel Fassler continue to lead the race overall up front, by a second, with the #1 Porsche of Timo Bernhard and #8 Audi of Oliver Jarvis third. The first of the Toyotas was the #5 of Kazuki Nakajima down in fifth place behind the #2 Porsche in fourth. The action up and down the field was frantic in the opening 10 minutes.

After 15 minutes of racing, it was still close in LMP1, with Fassler unable to pull much of a gap from Bernhard. The #7’s lead was just 2.3 seconds, before Bernhard caught up briefly through traffic, unable to mount a challenge. GTE Am was much the same, with Patrick Long’s #88 Abu Dhabi Porsche struggling to pull away from Wolf Henzler in the KCMG Porsche. 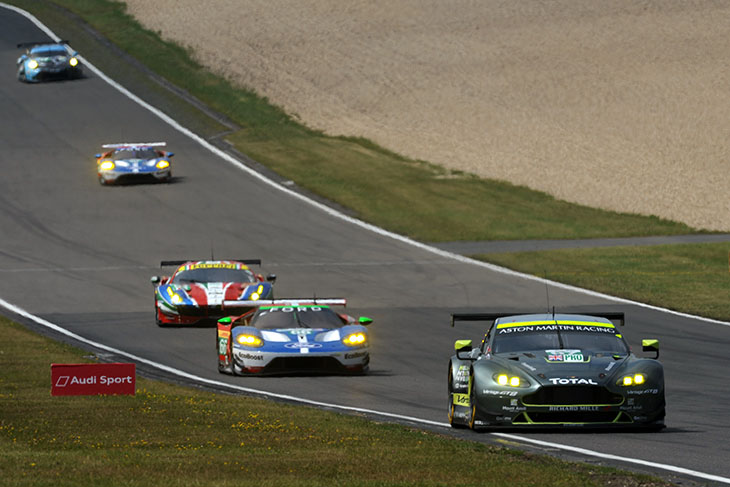 With 30 minutes to run, the #7 Audi and #1 Porsche came together for the lead, with Bernhard trying to get past at Turn 1 round the outside, but to no avail. This caused Jarvis to catch up, and later Jani’s #2 Porsche and make it a four-way battle for the lead through traffic.

LMP2’s running order was much the same by this point, with G-Drive Racing’s Oreca of Rene Rast leading the #36 Alpine and #42 Strakka Gibson by 12 seconds. The two Manor Oreca 05Rs sat fourth and fifth. 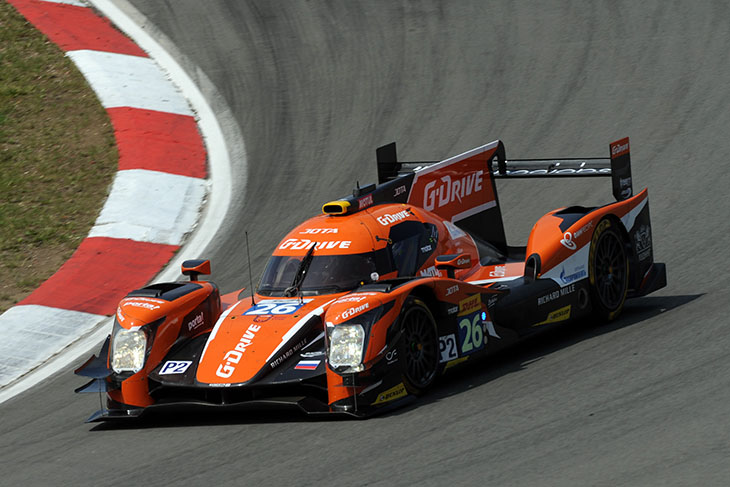 On lap 19, Timo Bernhard had a run for the lead down the pit straight, but went way too deep into Turn 1, narrowly missing the KCMG Porsche, allowing Fassler to retake the position on the cut back.

It then became extremely close through traffic during the following lap, as Bernhard tried to make another move a lap later but couldn’t. For third, Jani tried to get up the inside of Jarvis, but when he moved back to the racing line into Turn 1 he tagged the front of the #66 Ford and had a spin into the runoff. When Jani rejoined Nakajima’s #5 Toyota in fifth was just behind.

Meanwhile, the battle for second in GTE Pro raged on, though it was a stalemate, with the runners in the four-car train unable to get by each other, running on the ragged edge until Harrty Tincknell barged his way through to fourth place, getting past Bruni’s 488 at Turn 1 up the inside.

With 50 minutes run, the P1 cars began to pit, with both Audis coming in first. Jarvis stayed aboard the #8, while André Lotterer climbed aboard the #7 for his first stint.

After the round of stops the #1 Porsche emerged in the lead with Brendon Hartley aboard, an astonishing in-lap from the Kiwis while the Audis were delayed in traffic. The lead was five seconds, with the #8 of Jarvis second and the #7 of Lotterer third.