A year after scoring their first win as a trio in last year’s 6 Hours of Nürburgring, the #1 Porsche 919 of Mark Webber, Timo Bernhard and Brendon Hartley stole the show in what turned out to be a dramatic 2016 edition of the race. The #1 car beat out the sister #2 Porsche of Neel Jani, Marc Lieb and Romain Dumas and the two Audi R18s which had race-winning pace to take its first win of the year.

“We had a tough first part of the season,” exclaimed Bernhard after the race. “We really wanted a victory on home ground for Porsche. I’m really proud for our crew to come back and win after such a hard start to the year.”

In the other classes, the #36 Signatech Alpine of Gustavo Menezez, Stephane Richelmi and Nicolas Lapierre took a dominant win in LMP2, AF Corse scored its first 1-2 of the season in GTE Pro bouncing back from a disastrous Le Mans and the #98 Aston Martin of Mathias Lauda, Paul Dalla Lana and Pedro Lamy took its second GTE Am victory.

Finishing second and third behind the winning Porsche were the two Audis, with the #8 coming home ahead of the #7. Oliver Jarvis, Loic Duval and Lucas Di Grassi all drove hard to secure their spot on the podium, but through the middle portion of the race looked like the team to beat.

The #7 of Marcel Fassler and André Lotterer also ran quick, led early, but like the #8 had its chances of victory hampered by two unfortunately timed full-course yellows which caused them to lose a lot of time. In the end the #8 and #7 came home just over 50 seconds off the leader in formation. 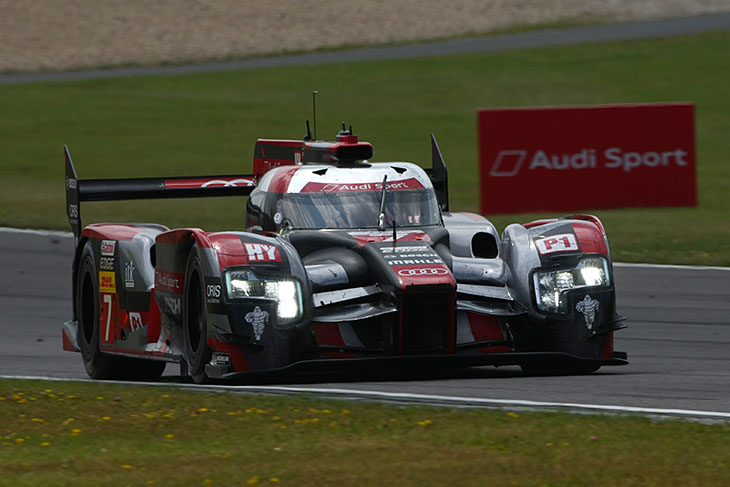 Finishing just off the podium, after inheriting the lead due to a very well times full-course yellow was the #2 Porsche, which was the centre of what turned out to be a door-banging fifth and sixth hour.

After taking the lead at the half, Lieb and Jani all drove hard to hold on to it, but lost it to the #1 in a pit cycle. The Porsche Team decided to play the team order game soon after though, and let Lieb retake the top spot. It wouldn’t last though, as Lieb collided with the Abu Dhabi Porsche, diving up the inside at the Ford Kurve and had to serve a drive through as a result.

The drive-through penalty with 80 minutes remaining caused the car to slip to third behind the #8 Audi of Loic Duval, who defended extremely hard, allowing the #7 Audi of Andre Lotterer to catch up and join the fight for second.

After Duval ran Jani, who was then aboard the car, wide at Turn 1, Lotterer created an almighty tussle. The pair ran side-by side through Turn 1, the Ravenol Curve, the final chicane and final hairpin, which eventually resulted in the Audi taking the place and the #2 having to pit again to replace the rear of the car after contact with an SMP P2 car during the battle through traffic.

Toyota meanwhile, was nowhere, the pace in the TS050s from Le Mans seemingly gone. The #5 and #6 came home a distant fifth and sixth, multiple laps down. With neither car really in the points fight after Le Mans too, it could be a long second half to the season for the Japanese crew if its trip to Mexico doesn’t see a reverse in fortunes. 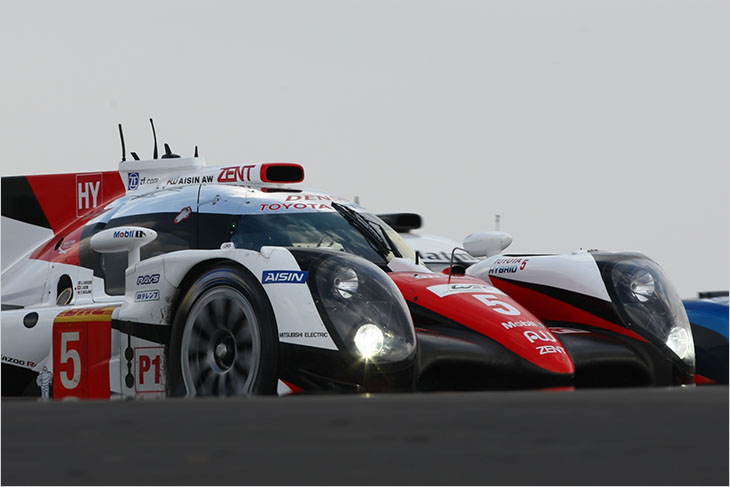 Rebellion Racing took a 1-2 in LMP1 privateer, with the ByKolles CLM, after leading the trio for a time, caught fire and retired with Oliver Webb aboard just over 100 laps into the race.

The other prototype was slightly more subdued, with Signatech Alpine scoring its third straight WEC LMP2 victory ahead of the #43 RGR Sport by Morand Ligier of Ricardo Gonzalez, Bruno Senna and Filipe Albuquerque and the #31 ESM Ligier which won a drag race to the line with the Strakka Racing Gibson to secure the podium at the end. 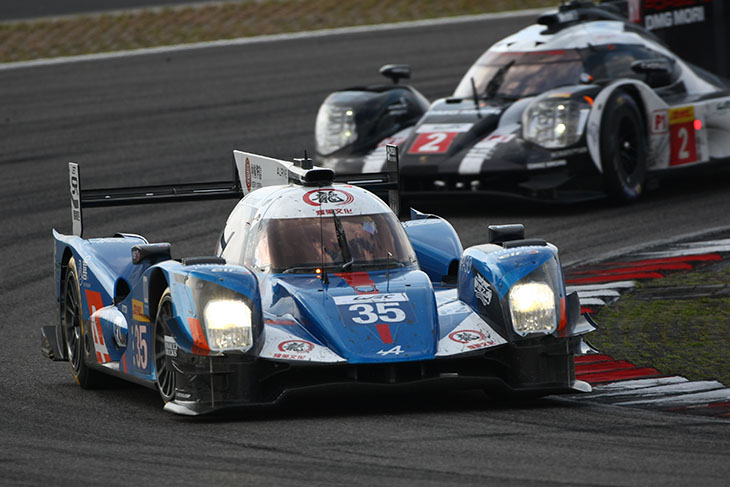 G-Drive Racing’s Oreca looked to be in control early from pole, with Alex Brundle driving extremely well in his first stint out front, only to be called into the garage early for a gearbox issue which forced them to retire. Another tough weekend for the Russian-badged crew.

From then Strakka Racing briefly held the lead on an alternative strategy while Lewis Williamson was making his debut race stint. The young Scot was incredibly impressive under the pressure of leading in his first race, showing that he has a future in this sport.

It was a slight disappointment for the team, who were unable to reward him with a trophy after a late charge from Jonny Kane to the line after Nick Leventis’ stint towards the end of the race. Strakka did however run supremely well in what is now a truly age-old Gibson up against the new Oreca and Ligiers, finishing in fourth, equalling its best finish of the season at Le Mans.

Manor once again had the speed, but couldn’t put anything together, finished fifth with the #44, and retiring the #45 after a brake disc failure.

In GTE Pro, AF Corse’s return to form saw the #51 488 of Gianmaria Bruni and James Calado take its first win of the season after multiple reliability issues throughout Silverstone, Spa and Le Mans. It also marked a a very belated first class win for Brit Calado.

Aston Martin led the majority of the race, but the charging Gianmaria Bruni denied the #95 crew of Nicki Thiim and Marco Sorensen the win, taking the lead of the race by making a move on the Vantage in the Mercedes Arena with two and a half hours remaining. 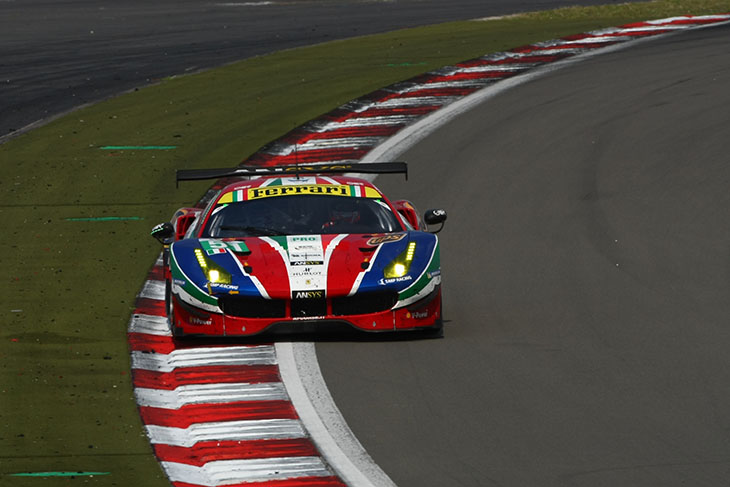 From there the #95 slipped back further to fourth after getting engulfed by the championship-leading #71 AF Corse Ferrari of Sam Bird and Davide Rigon and the #66 Ford GT, before scoring a podium finish after the Ford had to serve a late drive through for a pit infringement.

It was a tough time for the Fords, with the #67 of Harry Tincknell, Andy Priaulx and Marino Franchitti finishing last and delayed after a pit fire, and the #66 no quite having the pace to hang on to the leaders. It was a far cry from the ‘Blue Oval”s Le Mans dominance.

The #97 Aston Martin also had a tough time. challenged for the lead early, but was unlucky to have to change its door in a pit stop, losing it valuable time, resulting in a disappointing fifth place finish for Darren Turner and Richie Stanaway.

Aston Martin Racing’s win in GTE Am saw Lamy, Dalla Lana and Lauda storm to the front before the halfway mark in what was a hotly contested class throughout. The Larbre Corvette, KCMG and Abu Dhabi Proton Porsches all led, but in the end were unable to mount a challenge in the second half of the race. 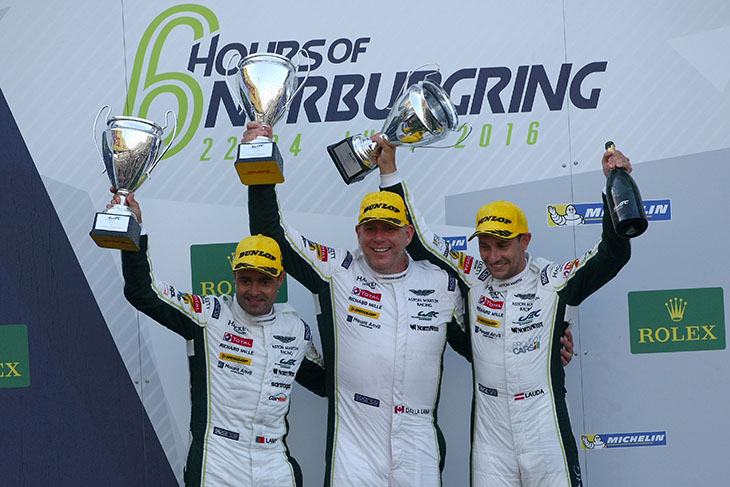 The KCMG crew finished in second after an almost faultless performance from Christian Ried, Wolf Henzler and Joel Camathias, with the #83 AF Corse Ferrari of Francois Perrodo, Manu Collard and Rui Aguas third.

The 458 did challenge for the win, and battled with the KCMG 911 for the lead during Perrodo’s stint at around the three hour mark, but the Frenchman went off at the entry of the final chicane, causing a full-course yellow while the marshals towed it from the gravel.

Labre’s Corvette finished fourth, ahead of the #88 Abu Dhabi Proton Porsche which led early but finished fifth after a delayed stop due to the car not firing, then a fire and a collision with the #2 Porsche.

Next up for the WEC is the 6 Hours of Mexico City on the 3rd of September.