The #8 Starworks Oreca of Alex Popow and Renger van der Zande scored its third win of the 2016 IMSA season, after the pair stormed to the lead after the 30-minute mark and held on for the win. The big story came in GTLM though, after Oliver Gavin and Tommy Milner led a Corvette 1-2, scoring the factory team’s 100th class win, and extended their championship lead.

In the race, which featured the PC, GTLM and GTD classes, the GTLM race was hotly contested throughout, with all five GTLM manufacturers having a chance to score a podium. As the race took shape though, the battle was between the Risi Competition Ferrari 488 of Giancarlo Fisichella, #4 Corvette C7.R of Oliver Gavin and the #67 Ford GT of Ryan Briscoe.

A costly error by Fisichella at Big Bend saw Gavin take the lead, before the Italian let through both Briscoe and the second Corvette of Antonio Garcia a few laps later. The sloppy sequence from Fisichella paved the way for Corvette’s win with 30 minutes to go.

A handful of minutes later, Garcia then made a successful move on Briscoe to deny the Ford team second place. After that, the Briscoe was unable to put up any sort of fight, allowing the ‘Vettes to score the 1-2.

“Brilliant job by the Corvette Racing team giving me a great car today and Tommy for driving a great first stint,” Gavin said. “Brilliant day all around. We extended our lead in the championship, so it’s all good. It’s amazing to get the 100th win today. I’ve been a part of the Corvette Racing team for a long time, and this team has done an amazing job throughout my career. I just have to thank them and my great teammates.”

“Racing here at Lime Rock is always tough with all the traffic,” Milner added. “Fortunately, it seemed like there was just enough separation between the three classes in certain spots to really allow some passing to happen. For sure, I was frustrated at some points, and others were frustrated as well, but we all seemed to manage to make it through. There were a couple of guys racing super hard. I knew the race was going to get that way.”

Behind the eventual lead battle, the #25 RLL BMW and the #912 Porsche were in contention, after Dirk Werner took the lead of the race off Westbrook at the start in the BMW M6, and Frederic Makowiecki in the Porsche stormed through the field from ninth to third.

Both cars were involved in a heavy crash coming onto the pit straight during Bamber’s stint though, denying both cars a result.

The fight for the overall win was far more straight forward, with the Starworks team leading over two hours of the race. 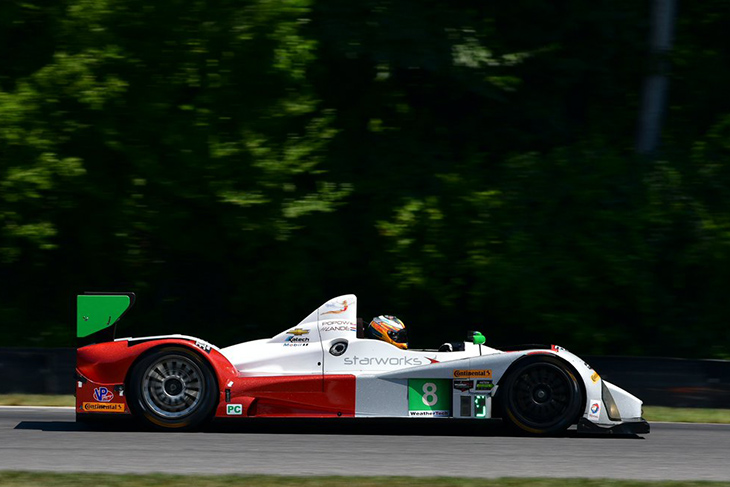 Popow, driving the winning Oreca, started fifth and nearly sustained damage in an incident at the start, but was able to fight his way to the lead after the first round of pit stops under caution.

“I’m very happy with the win, it’s another advantage for the championship,” said van der Zande, who joined Popow in winning for the third time in four races. “Lime Rock is a crazy place, because it’s a small track and you’re always wrestling your way through the traffic. It’s a fair fight here, because you can easily lose position coming through traffic. I love coming to Lime Rock, and I’m very happy with my team.”

Tom Kimber-Smith came up just 0.815 seconds short of repeating at Lime Rock in the #52 PR1/Mathiasen Oreca. Robert Alon led twice for extended periods during his double stint, losing the lead on a pair of pit stops. Kimber-Smith took over with one hour, four minutes remaining, and ran second behind van der Zande the rest of the way.

GTD saw Magnus Racing score Audi its second win of the season, after Andy Lally driving the R8 with John Potter, got by Jeroen Bleekemolen’s Riley Viper – which eventually finished third – with 22 minutes left in the race.

In his stint, Lally drove from seventh place to first, with the front runners in the class all staying close to each other throughout. The #6 Stevenson Audi of Robin Liddell and Andrew Davis finished up third.

“That was one of the most fun but frustrating drives of my life,” said Lally, who led the final 20 laps. “You have to make picks and pass on the outside to make that work. Really, it’s so special because these guys worked so hard after the wreck at Canadian Tire Motorsport Park.

“We talked about putting a special setup for Lime Rock to make this thing turn right. We planned for the end of the stint to be loose. We dialed like 80 degrees of wing into this thing and stuck a billboard on the back and it stuck, and that’s what let us come through with the win there.”

Next up for the IMSA WeatherTech SportsCar Championship is at Road America on the weekend of August 5-7. All four classes will be in action in the two-hour, 40-minute race.