The duo also managed to bag a podium finish in Saturday’s Race one and as a result, PRT Racing now leads the Teams’ and Drivers’ Championship as it heads to the third and final round of the Asian Le Mans Sprint Cup at the Sepang International Circuit on August 3 – 4. 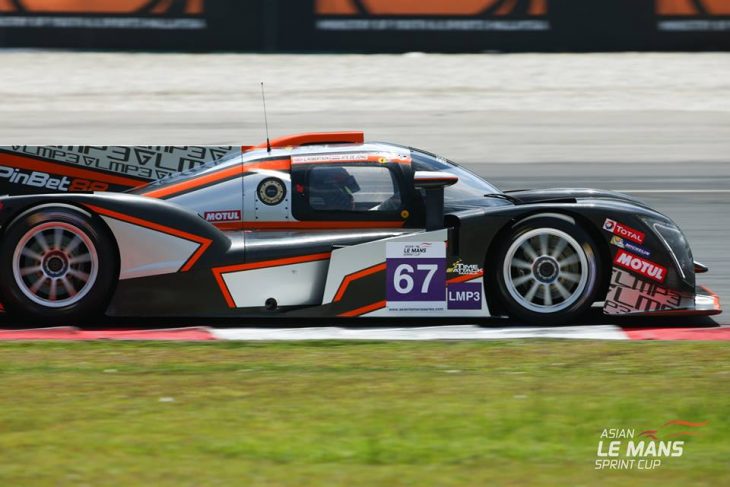 The Pinbet88-sponsored Ginetta LMP3 prototype was quick throughout free practice on Friday. De Jong then qualified P3 during the first qualifying session before handing the car over to Robertson who also set the third fastest time overall in the second session.

De Jong started Race one and defended his position as the grid got away. He maintained strong pace throughout his stint before handing the car over to Robertson at the race’s halfway point. The 19-year-old Scottish driver then cruised to a comfortable third place finish, setting the fastest lap of the race in the process.

Robertson got a great start in Race two on Sunday and immediately jumped to the front of the pack at the very first corner. He was able to pull away and hold onto the lead as the cars behind him were busy fighting for position. After the driver change, De Jong rejoined the race in P1 and with a massive 60 second gap to the second place machine. The Dutch driver then pushed his pace and took the win by one minute and twenty two seconds. 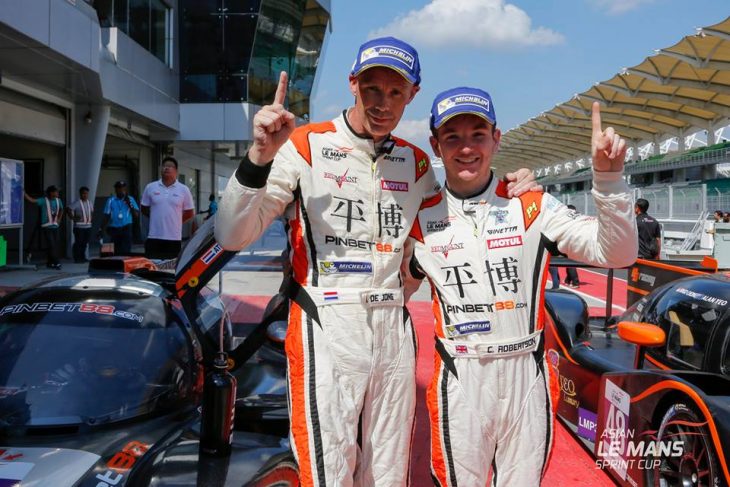 Ate De Jong, PRT Racing Owner and Driver: “The race weekend was very successful for us with two podiums, a third and a first place. Currently we’re leading the championship with two races to go. If we continue with this performance, we could win the very first Asian Le Mans Sprint Cup. This would be amazing for a team as young as PRT Racing.”

Charlie Robertson, PRT (and Ginetta Racing Driver: “We qualified third and Ate did a great job to hold that position in Race one. All I had to do was to bring it home and get the team’s second podium of the season. In race two, I took the lead in the first turn, Ate then kept pushing to finish with a huge gap. It’s a fantastic weekend to get our first win for PRT Racing and I hope there’ll be many more.”

A podium finish at Snetterton saw Optimum Motorsport retain their 2016 Pirelli British GT Championship GT4 points initiative in their #50 Ginetta G55 GT4 ahead of the final round of the Championship.

This came despite the fact that the warm summer temperatures and the Snetterton 300 track configuration were clearly not as much to their liking as to some of the opposition.

The Sunday double header of one hour races though still saw Optimum pairing Graham Johnson and Mike Robinson start from second and fifth, but with a seven-second success penalty to serve.

Fifth was the most that the #50 could achieve against the dominant Aston Martins in race one, but Robinson and Johnson kept the faith and the podium was still in their sights entering the second and final British GT race of the weekend.

The second race saw team strategy and hard pace come to the fore, a fighting opening spell translated into second place after the compulsory pitstop saw Optimum turn the car around with a well-timed and swiftly executed driver-change ensuring the Professional Motorsport World Expo-liveried Ginetta leapt up the leaderboard.

Whilst there was no route back to challenge the race winning Aston Martin Johnson maintained a comfortable advantage over the rest of the field to seal yet another great result, Lanan Racing’s identical Ginetta completing the podium, (Joey Foster and Alex Reed had set pole position for race one).

“I’m feeling really good about our results and the fact we were able to move forward in race two,” said Robinson. “I never thought we’d be able to move that far forwards; we had a bit of fortune with other cars breaking down, but the plan was to keep with the other Ginettas and do a bit of damage limitation for the championship as we head into the final round at Donington Park. It’s critical to be leading it now.”

Johnson added: “A podium was a bit unexpected today and that’s mainly because the Balance of Performance was ridiculously in favour of the Aston Martins. Anybody in a Ginetta was unable to compete with those in an Aston or a McLaren because they were so much faster in a straight line. It was a big damage limitation exercise here and I hope the BoP will be looked at before the next round.”

Ginetta factory driver Mike Simpson overcame illness to bring the #32 Ginetta G55 GT3 he shares with Ian Stinton home sixth and eighth in Sunday’s two one-hour races, while the team’s #56 entry – driven by David Pattison and Luke Davenport – also looked like a top-six contender before being sidelined in race two.

The Warwickshire-based squad’s two cars encountered contrasting fortunes during Saturday’s practice sessions after Davenport’s early accident caused significant front and rear damage to his Ginetta. While some team members returned to base for additional spares, the rest of the #56 crew’s mechanics set about repairing and re-welding the G55.

Things were a little easier on the other side of the garage where Stinton and Simpson built on their recent test mileage at Snetterton to lap sixth fastest in first practice.

The pair continued in the same vein during that afternoon’s qualifying session by placing seventh and eighth, Simpson looking particularly impressive with a time less than a second shy of pole. But it was the efforts of Tolman’s #56 pit crew that stole the show when the car emerged completely rebuilt in time for both 10-minute qualifying sessions. Their work didn’t go unnoticed by British GT officials who subsequently recognised Tolman’s efforts with the PMW Expo Team of the Weekend prize, awarded to the outfit that has shown ‘sporting attitude, dedication and spirit’ at each event.

The first of Sunday’s two one-hour races also offered the team a chance to demonstrate gains it had made on track since the start of the year, and Simpson and Stinton didn’t disappoint. The latter’s composed opening stint helped the Ginetta climb two places from where it started before Simpson took over for the final 30 minutes. Such was the car’s pace that a subsequent drive-through penalty for being marginally under the minimum pit-stop time and third pit visit to replace a punctured tyre came at the cost of just two positions.

However, there would be no such issues during the afternoon’s second race when the #32 Ginetta finished one place ahead of where it started, giving Stinton, Simpson and Tolman Motorsport their best result of the season.

Stinton’s role in the team’s results also didn’t go unnoticed, with British GT organisers making him their Blancpain Gentleman Driver of the Weekend.

“The testing we conducted here two weeks ago has really paid off this weekend,” said team principal Chris Tolman. “It’s been a tough season jumping up from a single entry in GT4 to a two-car GT3 team, but we’re starting to understand the G55 better. This was certainly our best weekend in terms of outright performance.

“I’m absolutely delighted for Mike and Ian who drove brilliantly this weekend. To miss out on a second top-six is frustrating but at least we know the pace is there to challenge. Luke and David also did well considering they hadn’t driven the car since Silverstone, and it’s moved on quite a bit in terms of set-up since then. There was a big practice programme scheduled for that car which obviously we didn’t get through, so David’s first laps of the weekend came in qualifying!”

Tolman also paid tribute to his mechanics whose hard work was recognised with the Team of the Weekend Award.

“I’m blown away and feel quite emotional, actually, because it really does reward the guys for their incredible effort,” he added. “Normally in that instance you’d pack up and go home, but because Luke swiped the barrier it just tore all the bodywork off without touching the suspension. Even so, the guys had to weld a lot of the front end back together in a very short space of time. They did a great job and just got on with it.”

The final round of this season’s British GT Championship takes place at Donington Park on September 10/11.