Wild doesn’t even begin to describe our weekend at Utah Motorsports Campus. Testing and practice sessions were a mixed bag, with strong results and good feelings in some areas, while others left us scratching our heads. Ultimately these difficult sessions make or break race weekends for teams, the depth of Cadillac Racing shines brightest in these situations. There were several big changes on the No. 8 Cadillac Racing ATS-V.R Coupe through the weekend, which paid dividends when it counted.

On Thursday the officials had sent out a provision for this event, allowing drivers to use any and all permanently installed “curbs” on the circuit. This meant that the 8-9-10 chicane complex, could be straight lined if you were willing to risk the potential damage to your tires, driveline and suspension. With permission from the team, I gave the “curb” hop a shot at the end of final practice. It was nearly a half-second gain from keeping all of your tires on the track. Ultimately I would use the “curb” in qualifying and never again due to the risk it presented. Surely everybody would have done so and nullified the advantage, but not so. We were rewarded with a second place grid slot for race one.

After reviewing sector times and trap speeds from qualifying, I knew it would be a difficult task to hold the second position on the long run down to Turn 1. I was starting next to championship leader Alvaro Parente and his McLaren who was on pole. I did my homework and watched the Touring Car race on Friday, I don’t want to reveal what I learned. I was able to get a good jump on the pole sitter Parente at the start. Not a second or two later Alvaro was already out accelerating me, then a bump draft from the freight train Nissan of eventual winner Bryan Hietkotter pushed Parente right past and relegated me to third. The rest of the field was storming down on me by the time we arrived at Turn 1, but I was able to hold my position after a couple of massive slides through the slippery first sector. The double yellow flags flew for a stalled car on the circuit, we would restart a lap and a half later. 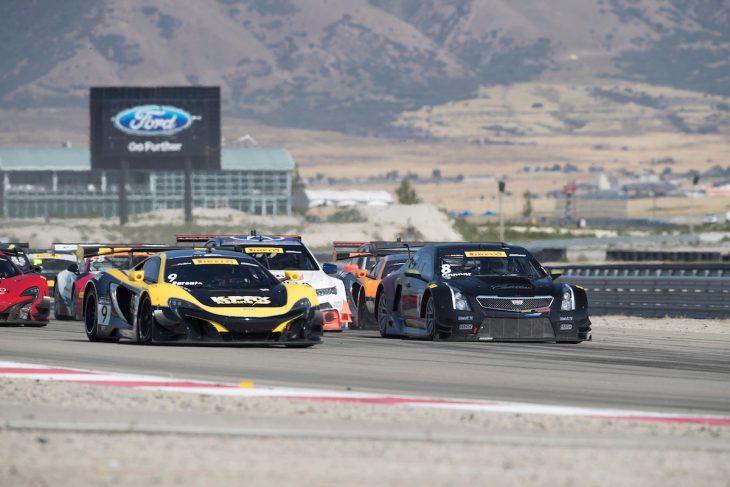 I trailed Parente on the restart with the Nissan leading, once again with the rest of the field closing in down the long straight. Left with no option but to defend my position from the faster cars behind, I took to the inside of the track as I did on the initial start. As we neared Turn 1 several cars behind were getting closer and closer, but it didn’t seem as if they would be able to pass before the brake zone. Now focused forward with Parente on the normal line about two car lengths ahead and me on the inside, I braked at my normal point thinking I would just tuck in behind his McLaren.

Almost immediately I knew I had made a mistake, Parente did not brake as late as I had. As he turned in and swept toward the apex I knew we were on a collision course, there was nothing I could do at this point beside keep my foot on the brakes and hope. Just like that it was over, my mistake sent the McLaren and I spinning off the track into the Tooele dust. After collecting my thoughts, I re-fired the Cadillac ATS-V.R Coupe to assess the damage. Cadillac builds a strong and safe car, but I thought for sure it would have some significant damage from the hit. Within a couple of corners, and to my amazement, the black Cadillac seemed fine. A drive through the pits for the team to take a look confirmed the same. Unfortunately for Parente, his day was done and he would score zero points in the championship. We would finish 15th.

I have taken full responsibility for this accident from the second it occurred and will continue to do so, as it was 100% my error. I don’t blame Alvaro one bit for the incident and I’m terribly sorry that my misjudgment cost K-Pax so many points.

Race two was much less eventful; I started fifth and was seventh by the time we arrived at Turn 1. I made an attempt to go around the outside of Turn 2 to regain the sixth spot, but was run out of road by a competitor who honestly did not know I had taken to the outside. Throughout the race I was able get alongside Jon Fogarty’s red McLaren a couple of times, but could never make the move stick. Ultimately a sixth place finish with an 11th place car is something Cadillac Racing can be happy with. 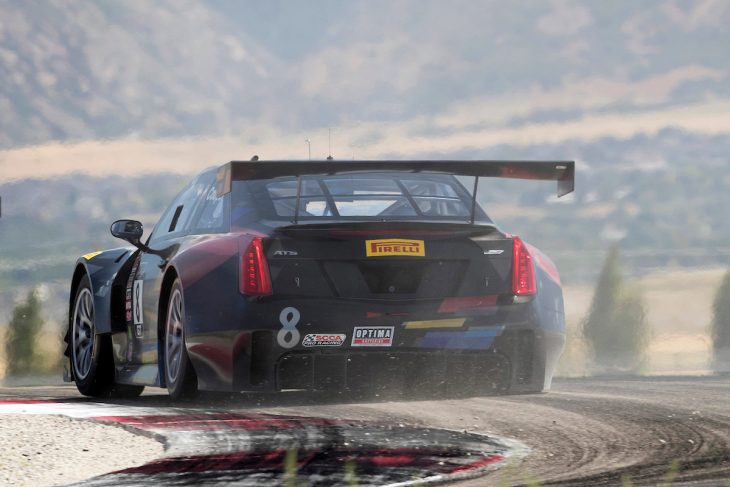 My teammate Johnny O’Connell and myself posted the 10th (Johnny) and 11th, me, fastest laps of the race while finishing sixth and tenth.

We head to Sonoma in mid September for the penultimate event in the championship and the last double header. Sonoma is an old school track, with huge elevation changes, blind corners and dirt run off instead of painted white lines. I prefer it this way, so my excitement to get to California is already at a high.

We sit roughly 65 points out of first place in the Championship; there are about 350 points on offer over the final three races. Still it will take a monumental effort to overcome the deficit, but this is a familiar task to both Cadillac Racing and myself. We will Dare Greatly.