Once a potential American Porsche factory star following successes in Porsche Carerra Cup Germany, California native Connor De Phillippi finds himself on Audi’s GT3 ladder with Land Motorsport. This year scoring wins in both ADAC GT Masters and the fabled VLN Championship, along with a valiant run in the Nürburgring 24 Hours, De Phillippi has hit the ground running in GT3 racing, turning heads along the way.

“I drove Porsche Carrera Cup last year with Land,” De Phillippi told DSC. “And they wanted to go to a higher level as their team sponsor was interested to go GT3 racing. They had a very good meeting with Audi, who were very supportive of the ideas in mind. 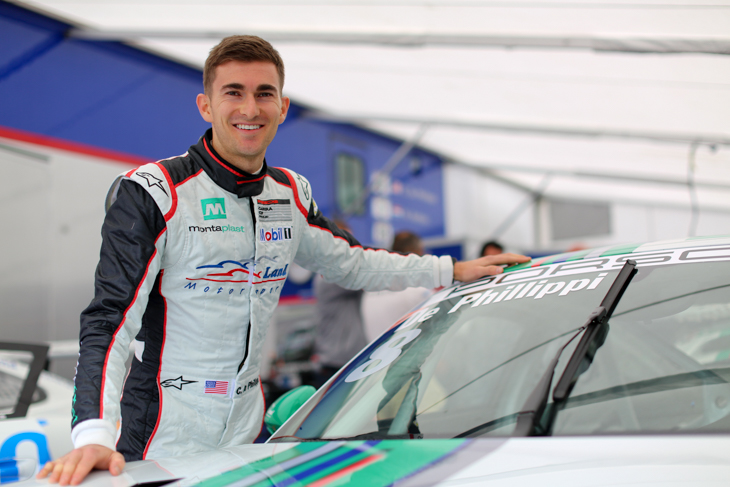 “Fortunately I was one of the drivers chosen along with Chris Mies, and we really hit it off at the Dubai 24 Hours. Back then it was a testing the waters situation, and that went so well that everyone was motivated to put together a big programme.

“This year overall has been a big step forward in the direction I’ve been aiming to go, with a factory programme,” he continued. “The last three years I’ve been doing Porsche Cup racing and it wasn’t the perfect atmosphere for me to display my talent, now I’m here with the Land Motorsport guys, who have huge support from Audi. The R8 LMS is so nice to drive and GT3 racing really suits my style. I think we’ve seen that in the results this year.”

In the GT Masters Championship, De Phillippi, along with teammate Chris Mies, sit at the top of the Drivers Championship standings by two points after a consistent string of results and a win at the Nürburgring. With just one round to go, De Phillippi feels very much at home in the series, and is constantly impressed by the levels of competition. 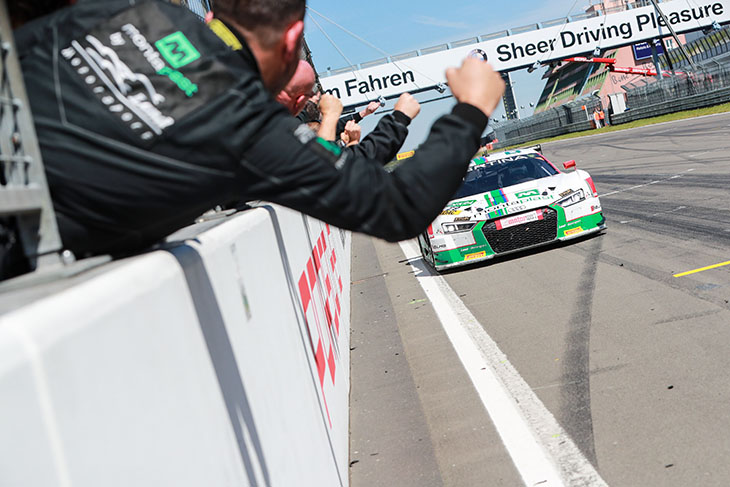 “I think the series gets overlooked, because obviously there’s bigger GT3 championships, but the level and style of racing is great. To win a race in this series you have to do everything perfectly, even the strategy, because the races are an hour and you don’t get to change tyres.

To win a race in this series you have to do everything perfectly, even the strategy

“As far as a training ground for GT3 racing and higher levels of motorsport, it’s one of the best.”

But the series has been under scrutiny recently, with Car Collection Motorsport and Callaway Competition being vocal about its BoP changes. De Phillippi can relate to that, especially driving for a marque which has also seen the two of its cars banned for the Zandvoort and Hockenheim rounds. APR made illegal modifications to the air-boxes of its two R8s at the Red Bull Ring.

De Phillippi though, feels that the series has done a good job overall in 2016, ensuring that all marques involved have a shot at wins. 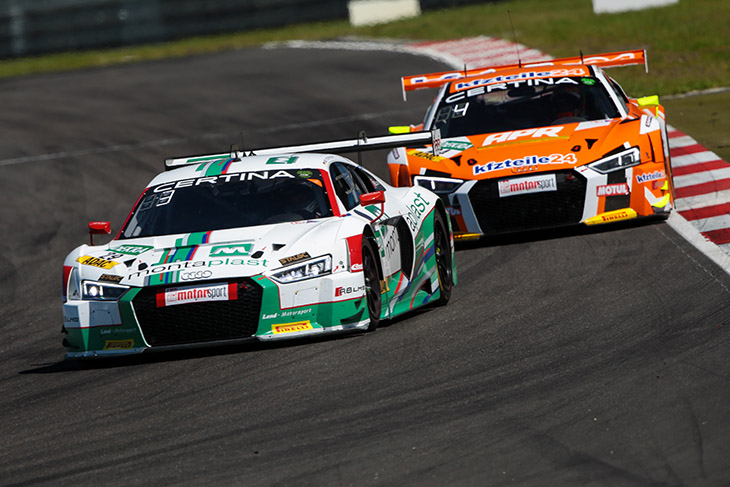 “I’ve been treated fair, I can’t say anything negative from a personal point of view,” he said. “Every series can do better, they can’t be perfect, people will always be unhappy. We at Land haven’t had the best BoP all season, but have put in a lot of hard work on and off the track to make up for it, and that’s allowed us to stay in the championship fight.

Every series can do better, they can’t be perfect, people will always be unhappy.

“You can’t control it, you just have to get behind the wheel and drive the wheels off the car.

“It’s been a confidence booster to still get good results. The finale at Hockenhiem won’t be easy for us though, as the Porsches and Corvettes are around 10 miles an hour faster than us down the straights, and you can only brake so late to make up for it!

“We’re always the best Audi though, we can be happy with that performance.”

In the VLN, De Phillippi has soaked up the chance to drive a GT3 car on the world-famous Nordschleife circuit, winning two races and utilising the track time early in the year for a run in the Nürburgring 24 hours.

Driving a GT3 car on the Nordschliefe is absolutely magic

“Driving a GT3 car on the Nordschliefe is absolutely magic. Every lap I do there I get more comfortable. To drive the car from beginning to end every lap, pushing and improving is a dream.

“There’s nothing like it in the world. It’s a unique place and series, it’s a cult really, everyone supports it and the fans that show up each week are all so knowledgable. They’re always in the pit boxes, and the fact that they can do that and get close is great. It gives you a new perspective, I appreciate to see that side of motorsport fandom, more championships should do that.

“Hopefully we can get a few more wins. Next up for us is the six-hour race with just Chris (Mies) and I. Plenty of seat time, and we hope to get a third win in a row there.” 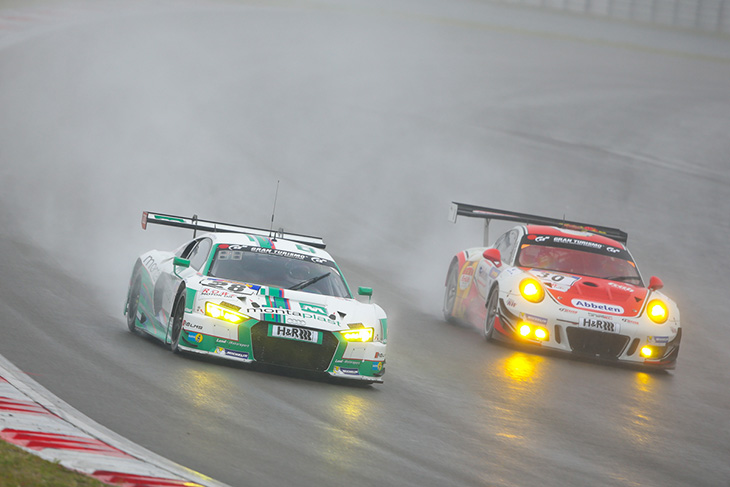 The Land R8 he drove along with Timo Schieder, Marc Basseng and Mike Rockenfeller retired from the round-the-clock classic, but for the build up and much of the race was at the forefront of Audi’s assault on the race, running in the top 10 during the race.

“Last year I was in an SP7 car for the 24-hour, and not fighting for the overall win,” he said. “This year being in a GT3 car with about 40 others was such a high level, it was the most competitive year of the event.

“It was my first time driving the car in such mixed conditions. My first stint was right after the monsoon conditions following the red flag, I’d never seen anything like it. I was the one nominated to get in the car as nobody else went to drive. I had a blast though getting into the top 10. 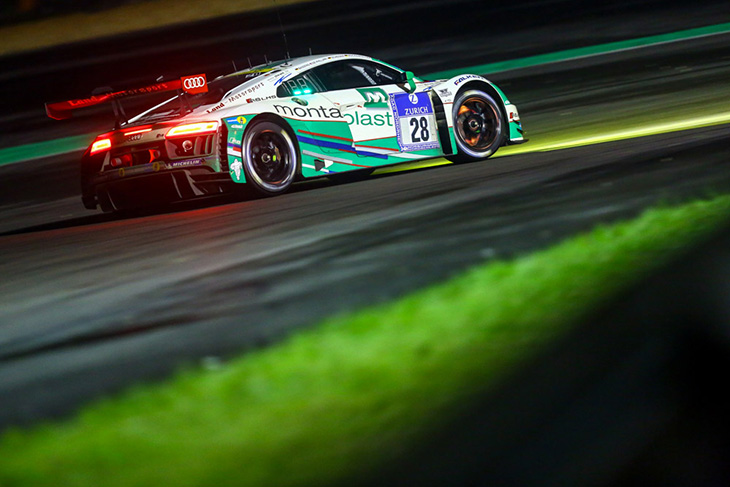 “It’s like the 12 Hours of Sebring, it’s almost impossible not to have a good time during that week.”

Where does he see his career going from here? Well its clear that he dreams of a factory drive, as a reward for all his hard work and dedication, travelling too and from the West Coast of America throughout the season for races.

“We have Pirelli World Challenge and IMSA in the US, but I’ve spent my whole GT career here in Europe,” he explained. “I have a long contact list and want to carry on here and become a driver for a manufacturer. Right now I’m in a situation where I can be with a team that helps me perform my best.

“Hopefully a chance comes in the near future to become part of a big factory programme. Racing back home would be ideal, but I’m fine flying back and forth. I’ve learnt a lot about myself doing all this travelling is great.

“Besides, I have a system,” he chuckled. “I get in a premium economy seat, 10 hours to Frankfurt from LA non-stop; eye-shades on, a few tunes, a movie and you’re almost there.