The Swede, whose co-driver Tristan Vautier posted the fastest lap of the opening session, comfortably progressed into the final 10-minute shootout before unleashing the best time of the weekend, a 1:42.433, to beat Belgian Audi Club Team WRT’s Christopher Mies by just 0.070 seconds.

The decisive 10-minute session was a fraught affair, with several drivers heading the times at various points. Rosenqvist was the first to set a standout time, but along with several others had it deleted by race officials for exceeding track limits. 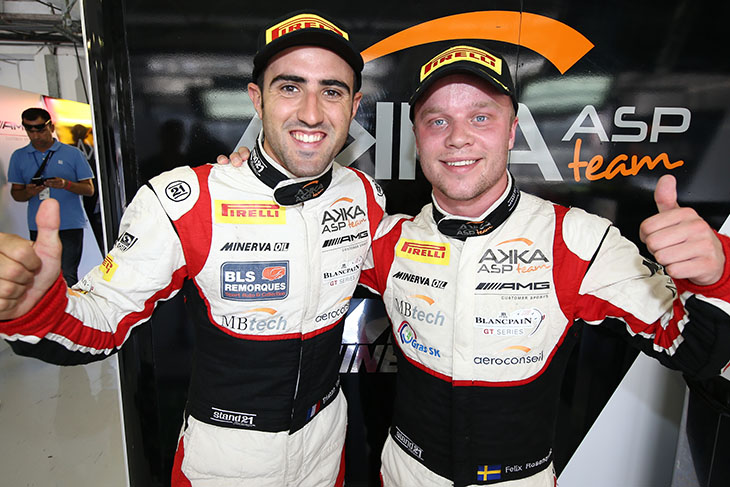 That initially helped WRT’s Laurens Vanthoor to briefly appear at the top before Mies redoubled his efforts and snatched provisional pole. But Rosenqvist would have the final say by lapping half a second quicker than the time originally deleted.

HTP Motorsport’s Dominik Baumann spent much of the final session at the sharp end and eventually claimed third with a lap two tenths slower than Rosenqvist’s. That gave Mercedes-AMG first and third in a top eight largely dominated by Audi, with Vanthoor’s R8 finishing one place clear of Christopher Haase’s Sainteloc example in fourth and fifth.

Jules Szymkowiak’s HTP Mercedes was next up, ahead of ISR’s Filip Salaquarda and Robin Frijn’s WRT Audi, which entered the final phase as fastest qualifier.

Ninth place was claimed by the first of the non-Audi or Mercedes drivers: Grasser Racing Team’s Mirko Bortolotti, while Morgan Moullin-Traffort completed the top 10 with the fastest Pro-Am time aboard another AKKA ASP Mercedes.

Championship debutant Alessio Picariello looked good for a top-six finish before winding up 12th as a result of repeated track-limits violations. However, the Phoenix Racing ace can still be satisfied with setting the quickest Silver Cup lap.

Meanwhile, another driver making his maiden Sprint Cup appearance, AF Corse’s Rino Mastronardi, was fastest of the Am Cup runners in 30th overall.