The pair came home second behind Alisdair McCaig and Rob Bell, who ended their season in the Black Bull Ecurie Ecosse McLaren on a high by winning Sunday’s two-hour race. Meanwhile the championship leaders coming into the race Jon Minshaw and Phil Keen saw their chances extinguished when Minshaw spun and crashed while avoiding lapped traffic during the first half of the race.

The opening lap saw a dramatic incident between Liam Griffin’s #6 Barwell Lamborghini and Mark Farmer’s #11 TF Sport Aston Martin at Hollywood, resulting in the latter spinning off into the barriers (and retiring) and the former having to pit with a puncture.

The safety car was called out briefly, with poleman Johnston in the other TF Aston leading McCaig (#79 McLaren) and championship contenders Jon Minshaw and Rick Parfitt Jr (#33 Lamborghini and #31 Bentley).

Dryburgh was soon eliminated from contention after some light contact resulted in a damaged oil pipe and a serious oil leak on the Motorbase Aston, while up front Johnston still had McCaig breathing down his neck in the McLaren.

Further down the GT3 pack, there was also an unscheduled stop for Stinton due to a puncture, elevating Howard to fifth and the GT4 leader to seventh overall after just 11 laps of racing.

The leading pack stayed very close together as they negotiated GT4 traffic, although Johnston had managed to eke out a 3.5-second lead on McCaig by lap 20. But the decisive moment came behind them, when Johnston’s primary championship rival Minshaw went pirouetting off the track at MacLeans and nudged the barrier.

Replays showed that Minshaw lost the car when he had to jink to avoid second-place McCaig ahead – who was himself baulked by a GT4 car he was trying to lap. That meant it was down to Johnston and Adam simply to bring the car home in one piece to take the title – and that was exactly what they did.

For the remainder of his stint Johnston continued to set a strong pace up front and the gap to McCaig was up to over 12 seconds by lap 27. Elsewhere, the delayed Stinton and Griffin had managed to work their way back through the GT4 runners to be sixth and seventh overall as the pit window opened.

Neary in the Abba/Rollcentre BMW was the first GT3 runner to pit, handing over the car to Martin Short. McCaig also handed the second-place McLaren to Bell, Stinton and Griffin switched for Mike Simpson and Alexander Sims respectively and Johnston handed the leading Aston Martin to Adam. Seb Morris also took over the Team Parker Bentley from Rick Parfitt Jr. and Howard yielded the Beechdean Aston Martin to Rory Butcher as the half-way point of the race passed. 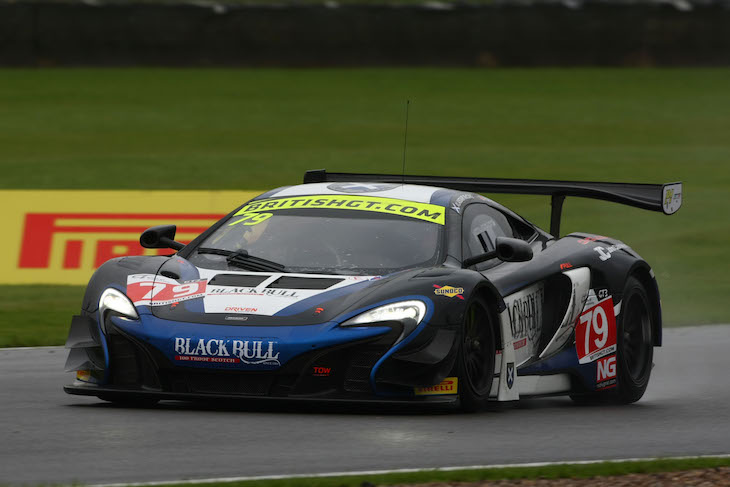 With everyone having made their stops, Bell (above) led Adam by seven seconds (by virtue of having to spend no extra time in the pits), with Morris a further three seconds down the road in the Bentley.

Butcher, Short, Simpson and Sims filled positions four to seven, with the other GT3 runners having either retired or hit trouble that put them among the GT4 field – although Luke Davenport in the #56 Tolman Ginetta started by Pattison did manage to make his way to eighth ahead of the GT4 field.

Sims got past Simpson’s Ginetta with about three-quarters of an hour left to run, but his next target was Short’s BMW, which was around a minute up the road. It looked like there was little Sims could do, but a stop-go penalty for the #88 BMW closed the gap to just seven seconds with 30 minutes remaining. This duo provided the entertainment in GT3 in the closing minutes, with Sims eventually nipping ahead into fifth before the flag.

At the front, the gap from Bell to Adam remained largely unchanged, with Morris keeping a watching brief in third – but also no doubt mindful of his and Parfitt Jr’s second place in the championship. They crossed the line in that order, with Butcher fourth, Sims fifth, Short sixth, Simpson seventh and Davenport eighth.

“I just had Jonny in my ear every corner, letting me know the gap,” a delighted newly crowned champion Johnston said after the race. “I knew my position so we just kept an eye on the gap and kept pushing, just never gave up.”

Adam becomes a back-to-back GT3 champion after lifting the crown last year with Beechdean’s Andrew Howard. “That felt like my longest-ever stint in a race car,” he told us. “It’s really nice to do the double, especially with a different team and team-mate. You need good kit in this sport and I’ve always had it with Aston, Beechdean last year and TF this year.”