The winner will be the driver who amasses the most points over the four races, and their prize includes a half price entry into the 2017 Ginetta Junior Championship or the Ginetta GT5 Challenge. Prizes are also on offer for second and third overall, as well as the Top Rookie and the hotly fought “Hard Charger” award for the most positions gained over the four races.

“The Ginetta Junior Championship always offers fantastic racing. Not only does it provide an opportunity for current drivers to have a second shot at a Junior title, it is also a fantastic way for those making the step up from karting to enjoy a ‘ toe in the water’ before committing to a full year in the series.”

The Ginetta Junior Winter Series has already cemented itself as a proving ground for racing drivers of the future, with Champions Seb Morris (2010) and Harry Woodhead (2012) going on to win the headline title the following year, whilst 2015 champion Stuart Middleton is currently fighting for this year’s main title.

Phil Ingram converted pole position to his sixth, seventh and eighth victories of the year in the Ginetta Racing Drivers Club at Donington Park, the result meaning the want2race scholar has won every single outing this season. 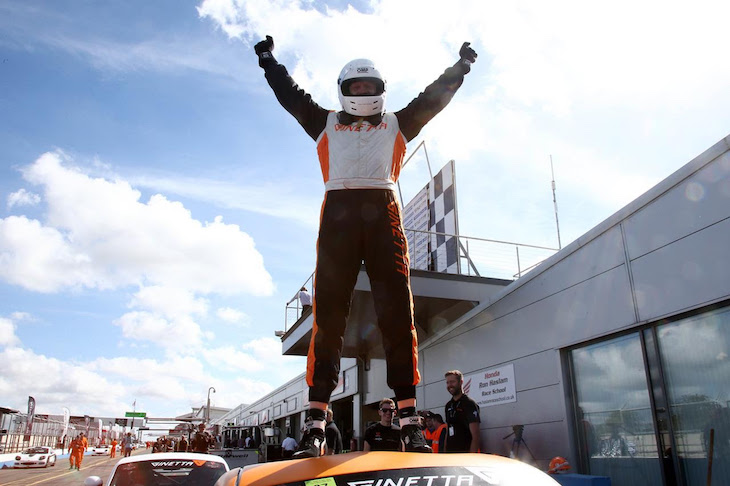 As the action got underway in the first of the weekend’s three races, Ingram started as he meant to go on, taking pole position from Richard Anderson by an impressive 1.164s. He continued that fine form in the race as a textbook start saw him saw him streak into the lead into Redgate for the first time, an advantage which was assisted by a spinning car just behind, which held the chasing train up.

With Ingram in the distance, Richard Anderson looked set to enjoy an untroubled run to second place and his maiden podium. However, second place was snatched away by a storming Richard Tetlow, who had spent most of the race behind Keith Gibson before managing to make a move on the penultimate lap.

Anderson finished third ahead of Gibson, who had to pull out every trick in the book in his bid to keep Karim Sekkat, Tamsin Germain and Simon Kersey at bay.

In spite of their newness to motorsport, the racers were not afraid to challenge one another with almost every passing corner. Unfortunately, the race came to an early end for Powell, who found himself stuck in the gravel at the Fogarty Esses.

Holloway recovered to seventh after being held up following the opening lap drama at Redgate, whilst the ‘man of the match’ has to go to Linn who started dead last in 22nd but drove a superb race to recover back to sixth.

In the second race of the weekend, Ingram continued in a similar vein, converting pole into an early lead ahead of Tetlow and Ishwerwood.

Ingram set the fastest lap on lap two and began to pull away, as Tetlow, Isherwood, Anderson and Holloway scrapped to complete the podium positions. Tetlow would prevail in the battle of the Richards over Ishwerwood, who held on for his third podium of the year from Holloway and Anderson.

Behind them, the best battle was between Gibson, Linn and Jack Oliphant for sixth, with the younger brother of 2015 Ginetta GT4 SuperCup champion Tom coming through to take the position, just 0.7 behind Anderson. Linn would take seventh, ahead of Gibson, with Sekkat and Baxter completing the top ten.

In the rescheduled Silverstone race, Phil Ingram chalked up his eighth win, making it a clean sweep for the want2race competition winner this season.

An opening lap drama between Trumper, Baxter and Rogers saw the trio’s final race come to an early end as they got caught in the gravel, bringing out the safety car, but not before Sekkat had picked up seven places to move into seventh!

Racing got underway once again and the usual suspects were up front. Ingram led from Tetlow and Holloway led the way with Isherwood and Anderson chasing the trio down in fourth and fifth. Isherwood did manage to take fourth, but no sooner had he passed his rival, he spun into the gravel and ultimately out of the race.

As the action drew to a close, Ingram completed his unbeaten string of victories at with a 3.9s advantage over second placed Tetlow. Anderson finished third with Oliphant and Linn rounding out the top five.

With another fantastic season of racing, Ginetta send their congratulations to all GRDC drivers for completing their first season in motorsport, and with them a successful future with their G40 Club Cars.  A special thank you also to all the fans and marshals who made the season what it is. Here’s to 2017.

A colossal 42 car grid headed to Donington Park for the final Protyre Motorsport Ginetta GT5 Challenge weekend of the year.

With Ollie Chadwick and Richard Evans both champions elect, the fight was all about the vice championship honours which were eventually claimed by Matt Chapman and Shawn Fleming.

In the GT5 Challenge, Matt Chapman arrived in second position, just ahead of brothers Ryan and Jonny Hadfield in third and fourth respectively. A tough qualifying for Chapman saw him start eighth, with the Hadfields in second and third, setting the stage for a great finale. It was a similar story in GRDC+ as champion Evans graduated into the GT5 grid for the final weekend, leaving Shawn Fleming and Adrian Campbell-Smith to fight it out over second overall. 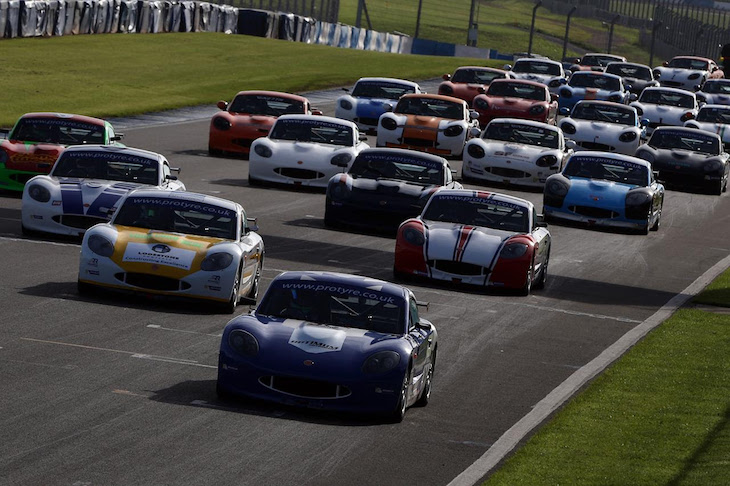 As racing began, Chadwick reiterated his position as the 2016 champion after taking a dominant lights-to-flag victory. Although he had to fight hard to keep Ryan Hadfield behind on the first few laps, he soon broke free and sailed to another win.

Behind Hadfield, his brother Jonny soon came under pressure from their main rival Chapman. With points meaning prizes, the siblings worked together to keep the TCR driver behind for the entirety of the race, chipping away at his points advantage as the race drew to a close.

Elsewhere, a number of drivers were hit with 10 second penalties for being ‘out of position at the start’ with Zapolski, Wilkinson, Flowers, Constable and Robinson all falling foul of the stewards. Wilkinson had been impressive on his debut, qualifying fifth and despite his penalty, had recovered to fourth before being caught in an incident which left him out of the race on the last lap.

Minshaw and Taylor were forced to start from the very back of the grid after failing to complete a lap in qualifying. Taylor managed to recover to 18th by the end of the race, but on an absolute charge was Minshaw who finished 13th overall, picking up an impressive 27 positions over the course of the race.

Broster picked up the GT5 AM class win after a brilliant race against PRO drivers Wells and Toth-Jones. Meanwhile in GRDC+ there was plenty of action in the fight for the race win. Campbell-Smith was the early leader from Smith and Fleming. An incident for Smith left him out of the race, promoting Fleming to second and signalling the start of a battle which would rage to the flag. Although Campbell-Smith took the win, second place was enough for Fleming to hang onto second in the points.

Race two was just as action packed. As the lights went out, Chadwick was embroiled in a flat out drag race with Ryan Hadfield heading into Redgate for the first time. Hadfield had his elbows out and shuffled Chadwick out of the way and down to sixth.

Hadfield’s lead was relatively short-lived however, as Chapman made an impressive start and powered from third to first by the time the cars arrived at the Craner Curves. By the time the first lap had run, Chadwick was up to fourth whilst Chapman led from the Hadfield brothers.

Hadfield and Chapman showcased their driving talents as they swapped places for the lead a number of times before the recovering Chadwick joined the party. The trio headed into the Melbourne Hairpin nose to tail but contact for Chadwick sent him into a spin and put him outside the top 10.

Meanwhile, Constable managed to pass Chapman and snatch third on lap five. Despite a number of challenges, the TCR car couldn’t find a way back past, but he did inherit a podium result nonetheless as Jonny Hadfield spun out of second place and brought an early end to the race as he couldn’t restart his Ginetta G40 .

In the AM class, Robinson returned to his winning was as he took the class honours and eighth overall, whilst in GRDC+ Flemming took his second win of the season, thus extending his points advantage over his vice-championship rival Campbell-Smith.

The reverse grid draw saw Wells start from pole position for the final encounter. A slow start for the two front row starters meant it was Palmer who lead as the cars headed towards Redgate for the first time. The drama unfolded behind though as a false start for Chapman meant he was handed a 10 second time penalty, dropping him immediately down the order and theoretically handing the vice championship to Hadfield, who picked up nine places on the opening tour.

As is always the case in Ginetta racing though, it isn’t over until it’s over, and Chapman brought his A-game as he fought to build a gap over the cars behind. He recovered to sixth on corrected time as the race came to an end, bagging him just enough points to secure second in the championship, just ahead of Ryan Hadfield.

In the AM class, it was another win for Shawn Fleming, a points haul which cemented him as the 2016 GRDC+ runner up. He finished 1.6s up the road from his rival from this year, Campbell-Smith, who ended up third overall and third in the championship as the action drew to a close.