The Lexus RC-F GT3 car will finally be homologated in the next fortnight, according to its development partner Emil Frey Racing. Speaking to DSC at the Nurburgring, Lorenz Frey confirmed the Swiss team has taken delivery of the improved version of the car. “It looks really good, they have incorporated a lot of developments suggested by us and Farnbacher Racing,” he said.

Elsewhere, negotiations with Jaguar Land Rover continue over the possible creation of a Jaguar F-Type GT3, although Frey admits it is now too late for such a project to come to fruition for the start of the 2017 season. He and the team are holding out hope that a new car could be introduced part-way through next year, however, before being homologated for 2018.

“That would be the dream,” he said. “We’re still talking to them, still negotiating but obviously Formula E is their priority right now. We’ve continued to invest in the team, adding personnel and expanding our facilities, to show that we’re serious. I understand they want to showcase electric technology, but endurance racing is a big and important part of Jaguar’s heritage, too.”

The possibility remains that Emil Frey will run both a pair of Jaguars and a pair of RC-Fs in next year’s Blancpain GT Series – although it all comes down to how competitive the ultimate version of the Lexus is. “Blancpain is definitely a priority for Japan, they see it as an important series to do,” Frey said. “From our side, it would be good logistically to have both models running in the same series, but at the same time working with two factories means we have to be strict about keeping the two sides of the team separate”.

“Whether the Lexus does Blancpain or not depends on how competitive it is,” he continued. “We’re building up our communications and operations with Japan, it’s always a challenge when it’s a such a long distance. We don’t want to move up too early – for the Japanese it’s very important to make gradual progressive steps, the kaizen philosophy.” 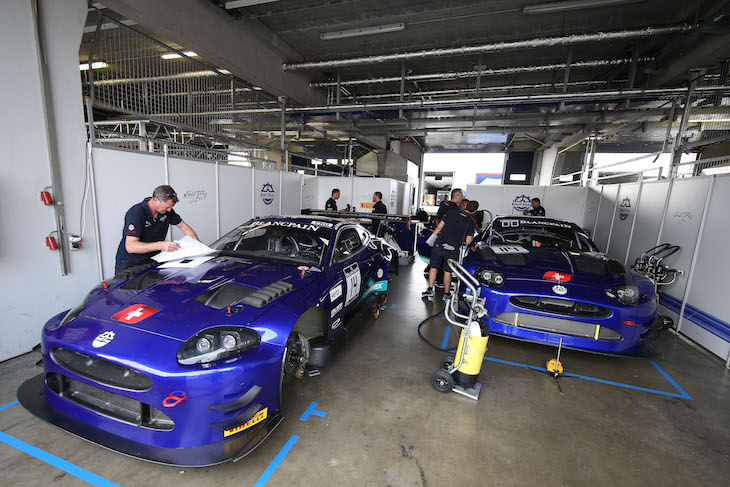 Ex-Formula One, LMP2 and LMP1 driver Christian Klien is once again in the second #114 Jaguar with Jonathan Hirschi this weekend, after making his debut with the team at the Spa 24 Hours. Norbert Siedler deputises for Markus Palttala, who’s on IMSA duty at Austin this weekend.

“It’s okay – we just need to keep working and keep developing,” Klien said when asked about the car. “It’s not like the Audi or Mercedes where it’s quick out of the box.” The Austrian is hopeful of continuing with the team next year and reckons his chances of a return to the protoype ranks in either the WEC or ELMS are slim.

“I can’t because I don’t have half a million!” he said simply. “Now all the young GP2 and GP3 drivers have realised it’s a good path, they’re all coming in with sponsorship. I don’t think there’s a single LMP2 team left where you don’t have to bring money – even for someone with my background. If that’s the case I’d rather stay at home!”