LMP2: Lapierre holds off Beche
Nicolas Lapierre continued the form that saw him top both free-practice sessions by taking pole position in the #21 DragonSpeed Oreca with a 2:06.603 lap. A late effort by Mathias Beche in the championship-leading TDS Oreca came to naught, leaving the #46 car to line up second on the front row with a 2:07.048.

Third and fourth will be occupied by the #38 G-Drive Gibson and #33 Eurasia Oreca courtesy of Harry Tincknell and Tristan Gommendy respectively, with Andrea Pizzitola and Nathanael Berthon grabbing fifth and sixth for in the Algarve Pro and Greaves Motorsport Ligiers.

Stefano Coletti put the SMP BR01 seventh, while series newcomer WRT will start from seventh, the #47 Ligier having been repaired following Laurens Vanthoor’s free-practice crash in time for him to participate in the session.

LMP3: Graff leads tight battle
A furious sequence of last-minute flying laps concluded LMP3 qualifying, with the top seven cars covered by just over a second in the final reckoning. The order at the end saw Enzo Guibbert on pole in the #9 Graff Racing car (below), ahead of Matt Bell in the #3 United Autosports Ligier on the front row.

Tockwith Motorsports’ Nigel Moore came close to repeating his Paul Ricard pole, but in the end had to settle for third, ahead of Panis-Barthez driver Simon Gachet. Alex Brundle in the points-leading #2 United Autosports car qualified fifth, just ahead of Yvan Muller Racing’s Yann Ehrlacher.

The #5 SPV entry played no part in the LMP3 qualifying session, remaining in the garage on jackstands throughout as the team dealt with braking-system issues.

GTE: First 2016 pole for Ferrari
Alessandro Pier Guidi (below) gave AT Racing (and Ferrari in general) its first ELMS pole position of 2016, lapping Spa in 2:17.038 in the qualifying session for the eight GTE runners.

“We expect strong competition from the Proton Porsche, but they seem to be more aggressive than us on tyre wear,” the Italian said. “We should end up in a good position at the end of tomorrow’s race.” 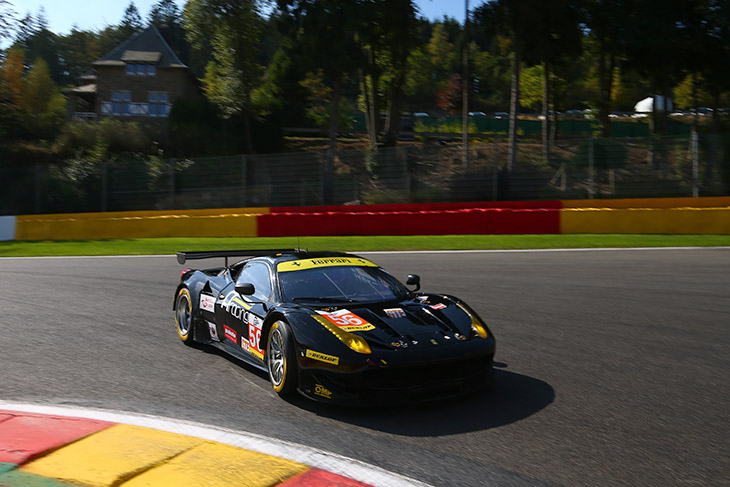 The first set of flying laps had seen the #88 Proton Porsche’s Matteo Cairoli just over a tenth up on Pier Guidi, with Andrea Bertolini third over half a second off the ultimate pace in the JMW.

Pier Guidi vaulted ahead next time around, while Cairoli’s second effort was three-tenths shy of the improved benchmark. Neither driver improved on their best on the remaining laps, although Matt Griffin in the #55 AF Corse Ferrari managed to unseat Bertolini from third later in the session.