New tub for WRT Ligier ahead of the race

The #47 WRT Ligier was rebuilt around a new tub overnight. Driver Laurens Vanthoor said that although the car was repaired following his free-practice shunt, the sticking throttle issue that caused the crash remained in qualifying. Further damage to the tub was discovered post-qualifying and in the course of the rebuild the throttle issue was also rectified. Will Stevens starts the car from eighth on the grid.

“The Ligier of By Speed Factory encountered engine problems while testing in Mugello. They could not be here, so they kindly let us use their entry for Spa. For now, this is just a one shot. Towards the end of the year, we’ll be competing in the Asian Le Mans Series with Borja Garcia and Ashram Dewal, who are both here. It’s a perfect training ground for them and for our team. We’ll again be racing LMP3 cars in 2017, before moving to LMP2 in 2018. We want to be in Le Mans for the 2019. We are here to stay with a four-year programme.”

“It’s the second time I get to drive the Ligier [Tavares first tested the car at Paul Ricard]. As it’s not my first time in Spa, my focus is really towards driving. I’m trying hard to keep up my concentration. It’s a challenge, as I often get often distracted by what’s happening in my mirrors. The car is fun to drive with incredible downforce at high speed. 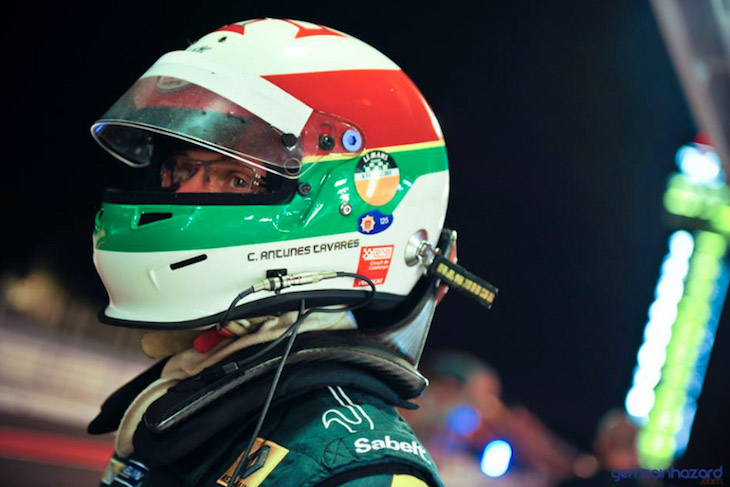 “This race should be a one-shot for me. I’ll soon return to my Lola T60 in historics: a completely different car with incredible power, but with a chassis of a different era.”

CN prototypes will need to be compliant with a new set of regulations in 2017. Oak Racing recently announced that it was working on a JS53 Evo 2 CN prototype powered by a 1.6-litre turbocharged Peugeot engine. When asked whether one could expect to see other Peugeot engines in other cars manufactured by Oak Racing, Tavares told us: “Peugeot supports any initiative that could be beneficial to the promotion of its products”.

Yvan Muller will call time on his FIA World Touring Car Championship career at the end of the current season. While the 47-year-old Frenchman won’t stop racing entirely, he will scale back his competition programme to spend more time with his family and to build his emerging Yvan Muller Racing team, competing in the ELMS this season.

“I was happily surprised by the JSP3” Schell to DSC after testing the car at Magny-Cours last week. “You can really have pleasure at the wheel. I have not given up on having an LMP2 program next year, but I will first need a paying driver to do that. If that doesn’t happen, then I have a fall-back option in LMP3 with one or two cars.

“That solution would also allow us to see which LMP2 cars are the best in 2017 and eventually return to that category in 2018. Obviously, we would remain in the ELMS, but we could also have one of our cars in the VdeV or Creventic Series. We should be making an announcement on our 2017 programme by year-end.”

Graff Racing confirms a 2017 program in the ELMS

A few weeks ago, the French team was debating whether it would race its Oreca 07 in the WEC or the ELMS. It has now been confirmed that it’ll be in the latter.

No AsLMS Norma campaign for TDS this season

Team manager Xavier Combet confirmed that the team won’t race Norma LMP3 prototypes in the Asian Le Mans Series this season. “We were hoping to get the car sooner,” said the Frenchman. “We should start developing it towards the end of the year and enter one or two cars in the ELMS next season.”

TDS Racing hasn’t given up either on racing a car in the GTE category: “We were quite close to entering one this season, but things did not materialise the way we were expecting. We haven’t lost that know-how, so if an opportunity arises over the winter, we will gladly take it.”

Finally, in LMP2, Combet indicates that his team is looking at the opportunity of a dual programme next year, including the ELMS and the WEC: “The WEC requires a bigger budget than the ELMS obviously. Ideally, we’d like to have an Oreca in each competition.” One of the two cars will be an upgrade of the current Oreca 05 chassis running in the ELMS.

Inter Europol Competition hasn’t finalised its plans for next year: “It’s our first season in the ELMS and in the VdeV. We’re doing relatively well with victories in the latter series,” said team manager Jorg Kranzfeder. “We should be able to return to the ELMS next season with one or two Ligier JSP3s. As usual, it will all depend on the budgets we can get.”

The Italian team is considering various options for next year, including an entry in the GT3 Le Mans cup [we were told this would not be with a Ferrari], an entry in the LMP3 category of the ELMS with its current car and also an entry in the LMP2 category. “Our objective is to go to the 24 Hours of Le Mans in 2018,” said chief engineer Diego Gottardi. “We would acquire experience in 2017 and possibly do this with a grandfathered previous-generation car”.

An announcement could come during the next round in Estoril. Team manager Dalius Steponavicius confirmed that the base scenario for next year is two Ligier JSP3s in the ELMS.