Fuji Speedway celebrates its 50th anniversary in 2016 and in Spring 2017 the circuit will throw open the gates for a free of charge celebration of the glory days of the past. 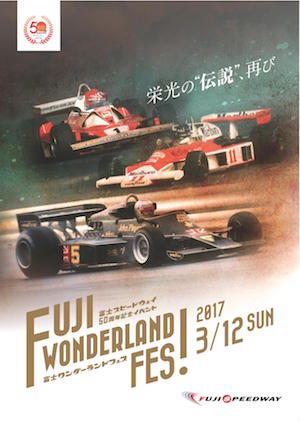 Fuji has held four Formula One Grand Prix and it’s only fitting that a selection of the cars that contested the first F1 races here on Japan are on the entry for the Fuji Wonderland Festival with a McLaren M23, Ferrari 312 T2 and Lotus 78 amongst the top single seaters planned to be running.

The McLaren of course was the mount for James Hunt’s title clinching run to third place in the weather affected 1976 Grand Prix, the first to be broadcast on TV globally with Niki Lauda true to his word and withdrawing very early in the race, unwilling to risk all in treacherous conditions so soon after his terrible Nurburgring accident, The Ferrari team though clinched the manufacturers Championship with the classic 312T2. Mario Andretti won the race meanwhile in a Lotus 77

Hunt was back to win the following year in the McLaren M26, Andretti, buy now in a Lotus 78 was out on Lap 1 after a collision. 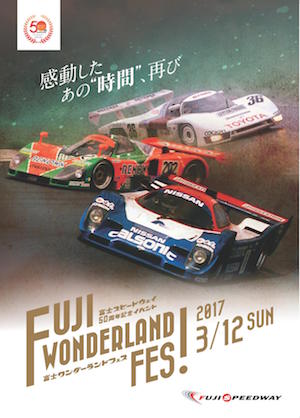 With such a rich history of endurance racing the inclusion of classic Sports Prototypes was inevitable too with Group C cars from Nissan, Toyota and Mazda all set to run.

The roots established in Japanese fan support for endurance racing that are still seen to this day with the massive crowds for Super GT, and substantial followings for the FIA WEC too, date back beyond the Group C days but the factory backed prototypes brought a huge following, not just fro the World Championship but for the national sportscar racing scene with Group C racers supporting the All Japan Endurance Championship and All Japan Sports Prototype Championship for a full decade from 1983-1992

And Japan’s fascinating, and hugely hard fought Touring Car scene isn’t forgotten either. A classic straight six screamer Hakosuka GT-R will be out on track together with the pocket rocket 70s and 80s Tourers from Nissan and Toyota.

There are a lot more period, and likely contemporary racers to be added to the entry in the coming months so if you are planning to be in Japan in March next year where better to spend a day than an historic circuit with it’s history laid bare on track.