Practice 2 ahead of the 2017 Rolex 24 saw Cadillac’s DPis lead the way once again, this time with Joao Barbosa setting the fastest time ahead of Qualifying later today. A 1:38.549 for the Portuguese veteran put the #5 Mustang Sampling Action Express Cadillac at the top of the screens again by just a fraction under two tenths.

Once again it was the Wayne Taylor Racing Cadillac which finished up second, with the Whelen DPi third. Ricky Taylor set the fastest lap for WTR, with Dane Cameron reeling off a 1:40.132 for Action Express’ second car. 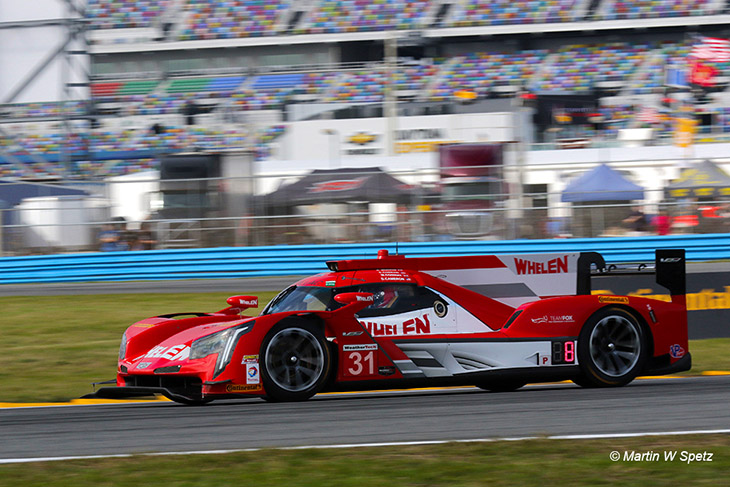 Behind the Cadillacs, the trio of Oreca 07 LMP2s finished fourth, fifth and sixth in the standings, with the #81 of Dragonspeed leading the three French chassis after Loic Duval’s 1:40.511. The JDC Miller and Rebellion Orecas ended up a further tenth and three tenths behind.

The #2 ESM Nissan once again placed the American team as best-of-the-rest in DPi, Ryan Dalziel putting the car seventh with a 1:41.116, 2.5 seconds off Barbosa up front and 1.2 seconds faster than the quickest Mazda (#70) in eighth.

ESM’s second Nissan didn’t have such a productive session though, as Johannes van Overbeek ground to a halt on the infield at the end of the session, bringing out a red flag.

The biggest story though, came from the Dragonspeed camp, after Loic Duval had a big off at Turn 1 in the team’s Oreca. The team is concerned about the condition of the tub, as the car sustained significant left-front and rear damage from the impact.

Dragonspeed does have a full spare car available in the USA however but are seeking permission to replace the tub.

This time though it was the Risi Competitizione Ferrari 488 that ended up second in the class following a 1:44.533 tour of Daytona International Speedway by Toni Vilander. The #911 Porsche finished up the pre-Qualifying on-track running third, continuing the new mid-engined car’s impressive early form.

Practice 2 was a better session for BMW meanwhile, as Bill Auberlin steered the #19 to fourth in the class with a 1:44.673. The #66 Ford GT rounded out the leading quintet in the class.

While the GTLM and Prototype leaders remained the same in both Practice 1 and 2, it was all change in GTD this time around. Park Place’s Porsche 911 GT3 R topped the times after Patrick Lindsey’s 1:47.135. His lap was just 0.059 better than Alessandro Pier Guidi’s best time in the Spirit of Race Ferrari that ended the session second.

Scuderia Corsa, which ran fastest in Practice 1, bookended the top three in the class. It was Alessandro Balzan again who peddled the 488 the quickest of its four drivers, with a 1:47.547 lap; two tenths faster than his best in Practice 1. 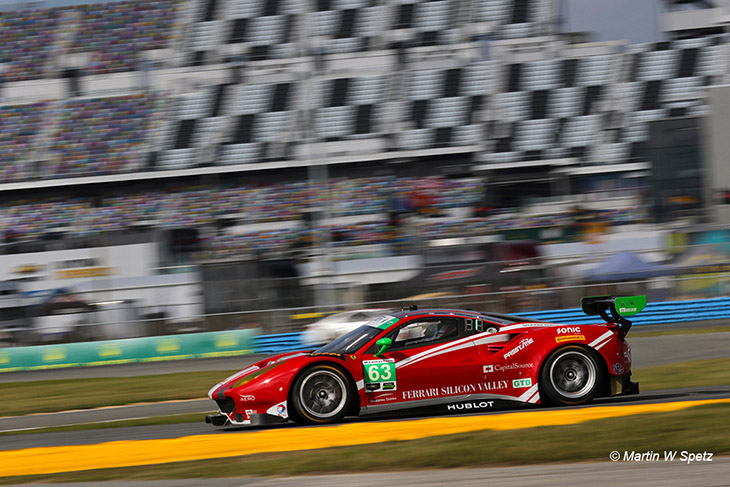 Next up for the WeatherTech runners is Qualifying ahead of the 2017 Rolex 24 Hours of Daytona, which is set to run from 15:10 local time in Florida.