Action Express Racing’s #5 Mustang Sampling Cadillac DPi ran fastest in the opening Practice session of the 2017 IMSA WeatherTech SportsCar season, with a 1:38.196 set by Christian Fittipaldi set towards the end of the session.

In the end it was a 1-2-3 for the Cadillacs in the Prototype class, with the #10 Wayne Taylor Racing DPi second following Ricky Taylor’s 1:38.992 lap, and Mike Conway putting the Whelen Action Express Caddy third with a 1:40.019. 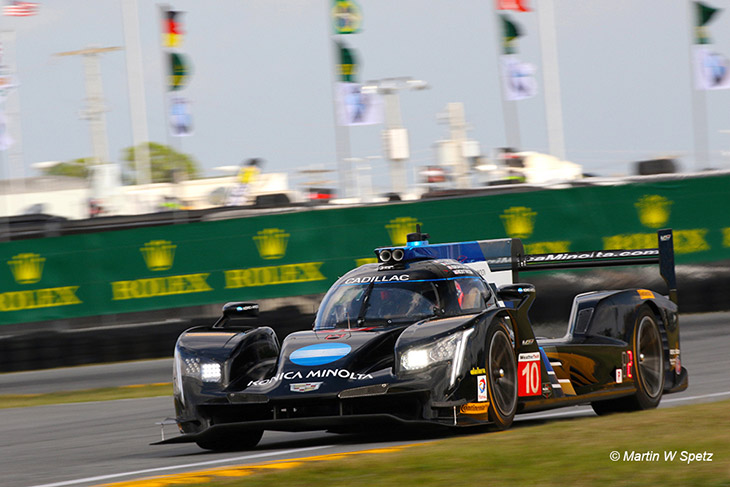 The first of the non-cadillac runners was turned out to be the #81 Dragonspeed Oreca, which sat second for much of the session following an early flyer by Nicolas Lapierre. In the end it was Ben Hanley who set the car’s fastest time though, a 1:40.356.

Rounding out the top five in the session meanwhile was the #85 JDC Miller Oreca, 2.2 seconds off Fittipaldi’s session-topping lap, ahead of the PR1 Ligier.

The best non Cadillac DPi ended up seventh. Brendon Hartley, in his first DPi experience after missing the Roar Before The 24, managed a 1:40.883 in the #22 ESM Nissan. Fastest of the two Mazdas was the #10 down in 10th overall with its best time (1:41.771) courtesy of Jonathon Bomarito.

The only Prototype with a notable issue in the session was the #13 Rebellion Racing Oreca which stopped out on the banking with 15 minutes remaining while Stephane Sarrazin was in the car. It did return to the pit lane however.

In GTLM, after a Porsche sat 1-2 initially, Ford topped the times in the premier GT class with Olivier Pla in the #68 GT setting a 1:44.755 to push Laurens Vanthoor and the #912 Porsche down to second. For Vanthoor it was a very promising start to his Porsche career, who is clearly already up to speed in the car. 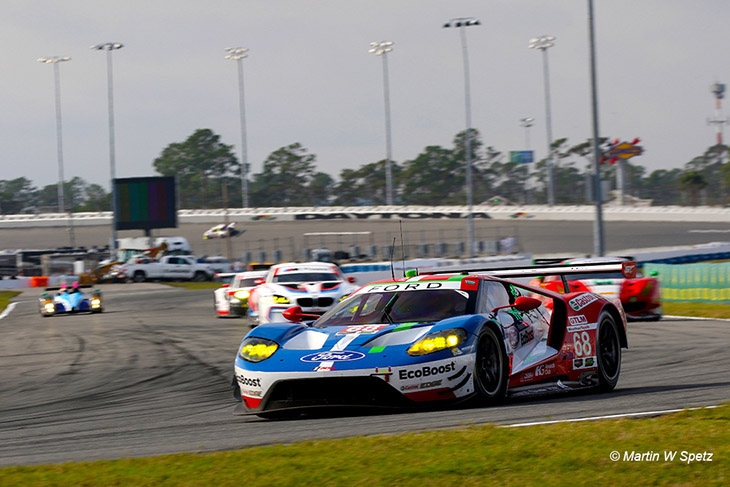 Third in the GTLM standings meanwhile was the second of the four Fords entered for the race, the #66, with the Risi Ferrari 488 fourth and the #67 Ford rounding out the top five.

Fastest of the Corvettes was the #3 down in eighth, ahead of the first BMW M6, the #24, in ninth.

Down in GTD Scuderia Corsa ran fastest with Alessandro Balzan setting the best time in the team’s Ferrari 488. Balzan’s benchmark time was a 1:47.778, just over a tenth quicker than the #61 Grasser Racing Lambo which finished the morning running second after Christian Engelhart’s 1:47.864. 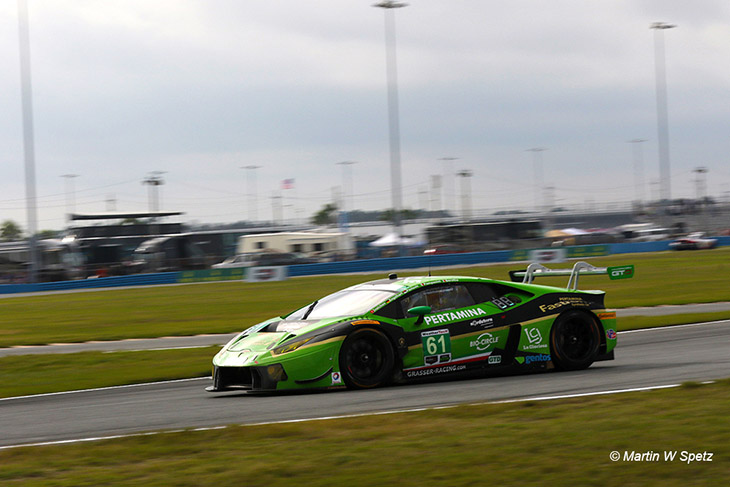 Making it three brands in the top three was Connor de Phillippi who put Land Motorsport’s Audi R8 third fastest. It was therefore a very positive start for both GRT and Land, two of the European teams making their IMSA debut in Daytona this week.

All but one of the GTD runners set times in the session, as the #15 3GT Lexus RCF GT3 failed to make it out.

In terms of GTD runners hitting trouble, Dream Racing’s Huracan stopped at Turn 1 briefly, but Cederic Sbirrazzouli was able to get the car back to pit lane.

The second IMSA WeatherTech Practice ahead of the 2017 Rolex 24 is set to run at 13:30 local time in Florida.