With 27 entries, the 2017 Rolex 24 GTD class is the biggest and the most diverse. With two entirely new chassis added to the fray, as well as the introduction of Mercedes, the race has all the potential to be a dog fight up and down the field.

Here’s a run down of the GTD runners, marque by marque: 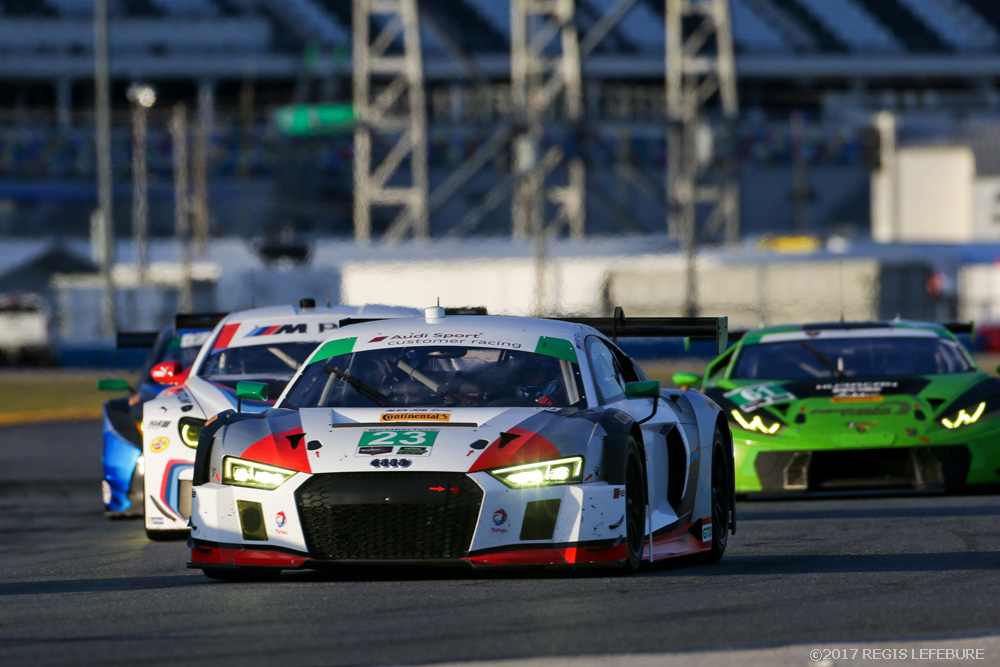 Alex Job Racing, Land Motorsport and Stevenson Motorsport make up the trio of R8 LMS GT3s entered in this year’s Rolex 24, each fielding a car apiece.

The R8 LMS itself has little to prove now, with two years of running at the forefront of GT3 across the world, picking up plenty of wins in both long and short distance races.

All three cars here feature notable driver lineups which have the potential to score the German brand a win.

Alex Job Racing brings the experienced American duo of Bill Sweedler, Townsend Bell with fellow countryman Frankie Montecalvo who has consistently impressed racing in the PWC GTA class over the past couple of seasons. The fourth driver for the car meanwhile is Audi-mainstay Pierre Kaffer, who is still capable of delivering the goods.

Land Motorsport meanwhile showed off its ability to win races in a tough field, after Connor De Phillippi and Chris Mies – who are set to drive this weekend for the team – won the ADAC GT Masters title in 2016 and three VLN races.

Stevenson Motorsport meanwhile has scaled back its effort to one car this year, but that shouldn’t affect the team’s potential, as team regulars Matt Bell, Andrew Davis, Lawson Aschenbach and Robin Liddell are all capable pairs of hands. 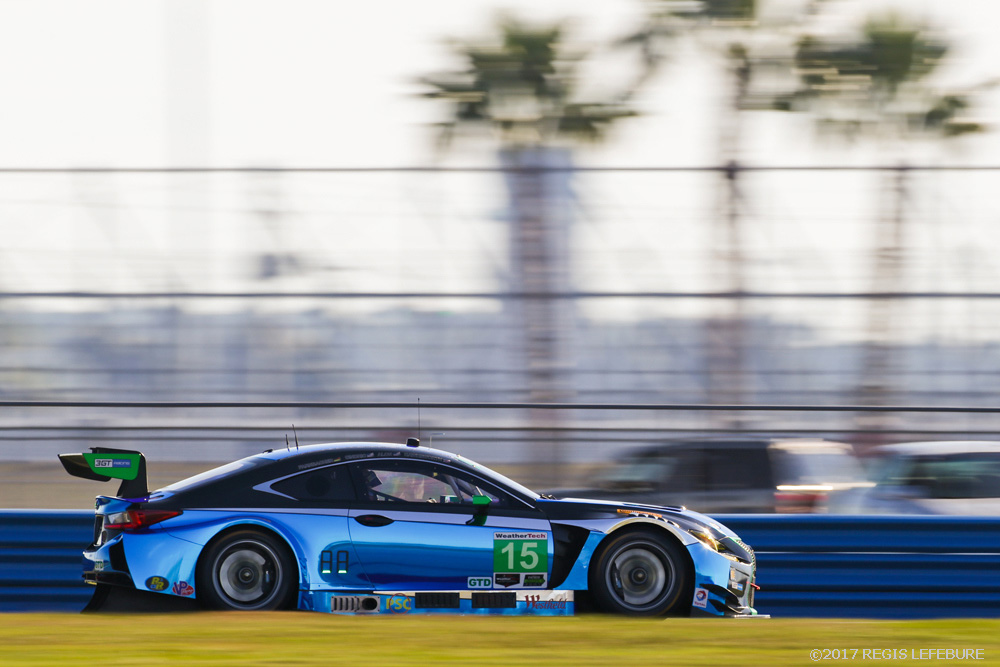 The 24 Hours of Daytona is set to be an extremely important event for 3GT Racing, the team tasked with debuting the Lexus RCF GT3 in IMSA.

The car itself is now in its fourth iteration, after years of development. The RCF set to race in WeatherTech this season is the same specification as the Lexus which raced – and won overall – in the VLN at the tail end of last season.

Now is the time for Paul Gentilozzi’s team to prove the car’s worth on a grand stage, and put to rest the nightmare which was the Jaguar XKR GT2 project from 2009-11.

In terms of driver lineups for its new machinery, Lexus-backed 3GT Racing will be fielding an exceptional selection of experienced and fresh driving talent; raising further questions about driver gradings in the process.

In the #14, five-time Rolex 24 winner will be joined by the talents of Daytona veteran Sage Karam, Ian James and 2016 FIA WEC LMP2 Drivers Champion Gustavo Menezes.

The #15 meanwhile sees British IndyCar talent Jack Hawksworth share the wheel with IMSA regular Robert Alon, Austin Cindric who raced with K-PAX Racing in the Pirelli World Challenge last year and Dominik Farnbacher who was heavily involved in the car’s development over in Europe. 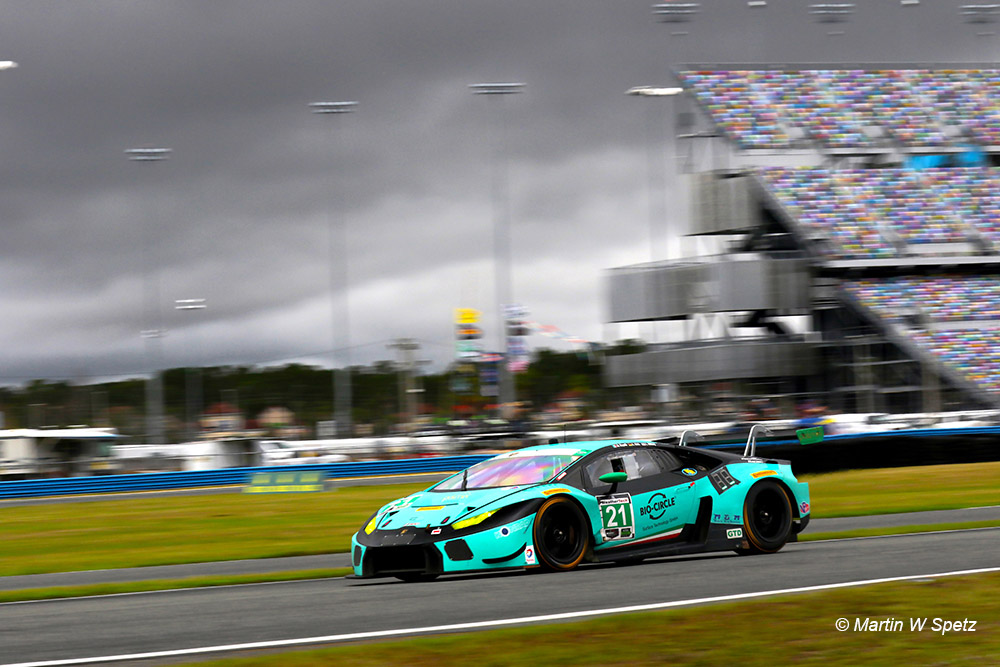 Lamborghini’s Huracan has been an extremely popular choice for GT3 teams over the past two seasons, and its presence in for this year’s Daytona 24 is no exception to that rule. A total of eight Huracans are set to race, across seven customer teams.

Last year’s Rolex 24 was bitter-sweet for the Huracan, which showed incredible potential and almost won its first 24-hour race. But the controversy surrounding its teams running ineligible restrictors cost the marque some promising results after post-race scrutineering.

The team bringing two to the race is the Grasser Racing Team, which has raced the Huracan since its debut in the Blancpain Endurance Series opener at Monza in 2015. This is its IMSA debut however, so it’ll have to get up to speed racing over in the states quickly.

Of the remaining six in the race, EBI Motors’ entry may be the most intriguing, with the ageless Fabio Babini driving with Emanuele Busnelli and the 2016 WEC GTE AM champions Francois Perrodo and endurance veteran/jack of all trades Emmanuel Collard. While Perrodo and Collard are yet to sample the Huracan in a racing environment, they’ve proven more than capable in harder to drive GTE machinery over the past two seasons.

The third Lamborghini customer team from Europe making the trip is Konrad Motorsports which like GRT was racing in the Dubai 24 Hours as a warm up only two weeks ago. Ex-Audi GT star Marc Basseng headlines its set of drivers with Luca Stolz and Marco Mapelli adding extra pro experience. Team owner Franz Konrad and Lance Willsey, complete the set.

The remaining teams are made up of IMSA regulars Change Racing, Paul Miller Racing – which features Dion von Moltke and Andrea Calderelli in its driver lineup – and Dream Racing.

Ex-Lamborghini Super Trofeo team DAC Racing is also on the entry having stepped up to the GT3 ranks for this season.
The Huracan GT3 most certainly has the pace to win this race, but is it durable enough? In the longer races over the past couple of years it has been prone to a variety of failures and proven fragile at times. 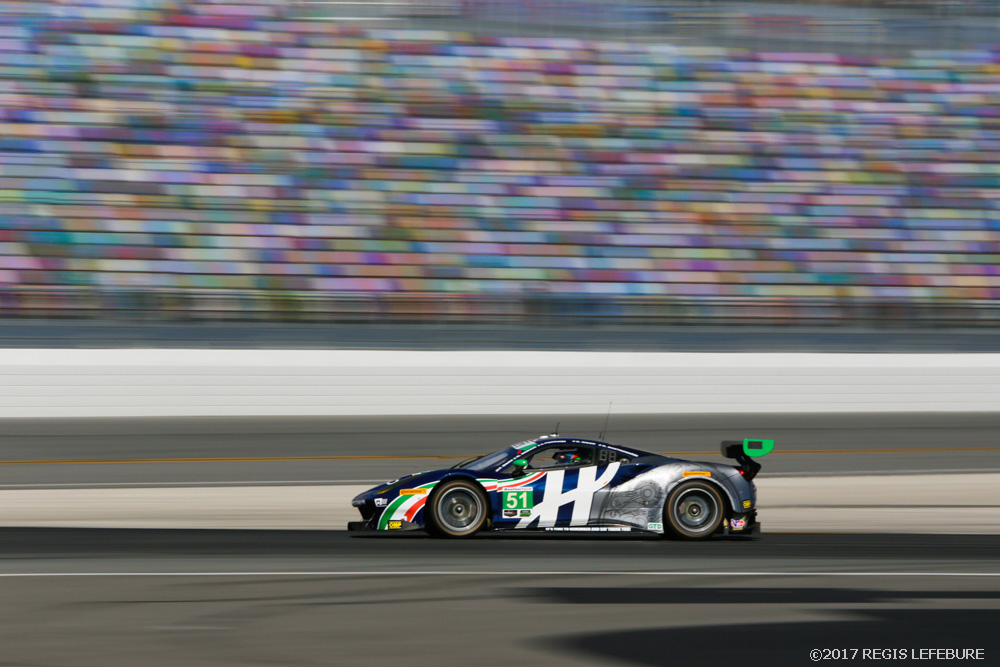 Spirit of Race and Scuderia Corsa are set to fly Ferrari’s flag in the GTD class, both with 488 GT3s.

Scuderia Corsa will look to kick off its 2017 IMSA campaign after an incredible run in 2016 which saw the team win at Sebring and Watkins Glen with its full-season drivers Christina Nielsen and Alessandro Balzan with help from guest drivers along then way.

For 2017 Nielsen and Balzan both return for the team with high ambitions, and rightly so. For Rolex the pair are joined by AF Corse WEC star Sam Bird and Matteo Cressoni who has amounted plenty of experience driving Ferrari GT3 machinery during his career.

Then there’s Sprit of Race which is a team run by none other than AF Corse. Ferrari works drivers Alessandro Pier Guidi – fresh from a winter spent racing in the Asian Le Mans Series with BBT– and Davide Rigon are set to drive with the team at Daytona, with Peter Man and Maurizio Mediani making up what is a very notable quartet.

The 488 GT3 is yet to win a major 24 hour race, but that’s not a knock on the turbo-powered car, which in its raw form is always one of if not the fastest GT3 cars over a single lap. It’s pretty reliable too, so watch out! 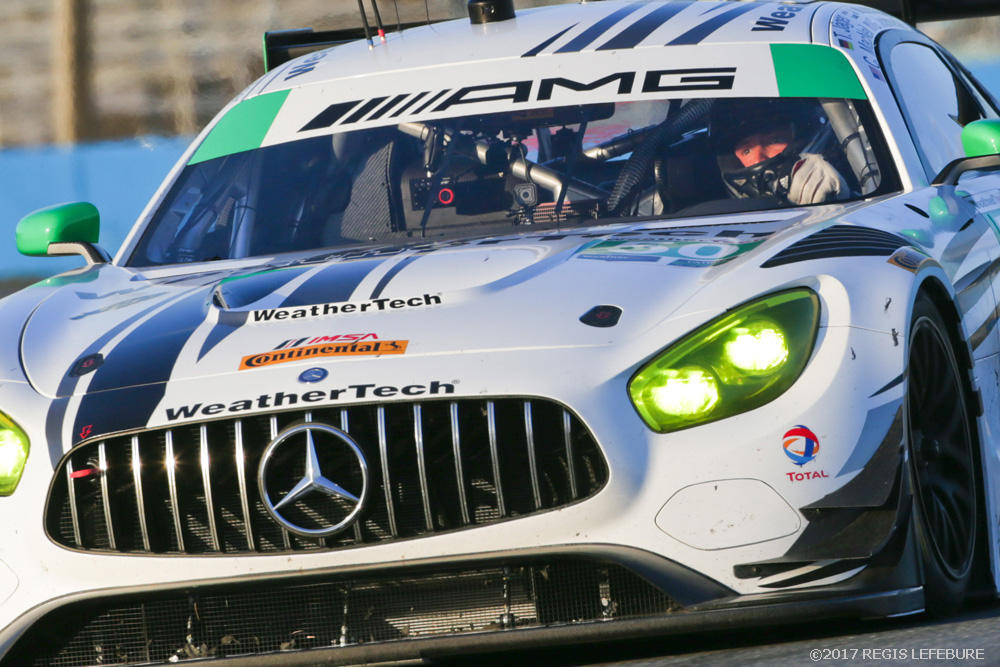 The new machinery from Acura and Lexus for the big race may be the most prominent talking points of the GTD field, but it shouldn’t be ignored how important and significant the inclusion of Mercedes joining the class this year is.

AMG is pulling all the stops to try and ensure its customer teams make an impact on the WeatherTech series this year for the brand’s GTD debut, with three cars from two outfits entering AMG GT3s.

At the roar, Riley – which as a company and team needs little introduction – ended up with the second fastest time in the class with its #33 car and is poised to be in contention to win a set of Rolex watches come Sunday afternoon.

SunEnergy1 is the other team on the entry, with a lineup that features AKKA ASP breakout star Tristain Vautier and 2015 FIA GT World Cup winner/2016 Nurburgring 24 Hours extraordinaire Maro Engel. With a striking livery and an ambitious set of peddlers, it’s surely foolish to count it out?

In terms of the car, Spa 24 Hours controversy aside, 2016 was a mightily impressive debut year for the AMG GT3 which hit the ground running in every sense, winning in Blancpain and dominating the Nurburgring 24 Hours (which is usually a good litmus test for the performance and durability of a chassis!) 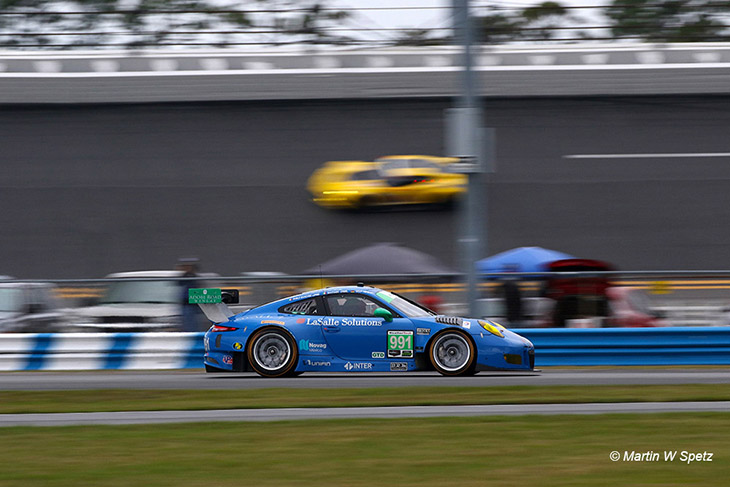 Of the quintet, the CORE Autosport and TRGs efforts should be the most impactful.

Similarly, TRG’s Porsche should feature in the fight for the class win, as experienced am Mike Hedlund teams up with veteran Wolf Henzler, Tim Pappas, Jan Heylen and Santiago Creel. TRG has made a habit of winning at Daytona over the years with four class wins – one of them a surprise overall victory in 2003. The team is also back with Porsche with an official tie-in for the first time in over a decade.

As for Manthey, the effort will be run well, with Sven Muller – who has just become a works driver for Porsche – Super Cup driver and coming Porsche man Matteo Cairoli. The lineup also features Blancpain race-winner Harald Proczyk and multiple Nurburgring class winner Reimhold Renger. The outfit also set the quickest time in GTD during the Roar Before The 24.

Ocassional DP entrant Alegra Motorsport’s lineup is headlined by factory driver Michael Christensen and ex-A1GP driver Daniel Morad. And Park Place has the potential to spring a surprise with young Matt McMurrary and the omni-present Jorg Bergmiester sharing its car with Patrick Lindsay.

The Park Place team had a very successful season in 2016, scoring three second place finishes in WeatherTech; it’ll therefore aim to continue its fine form in 2017. 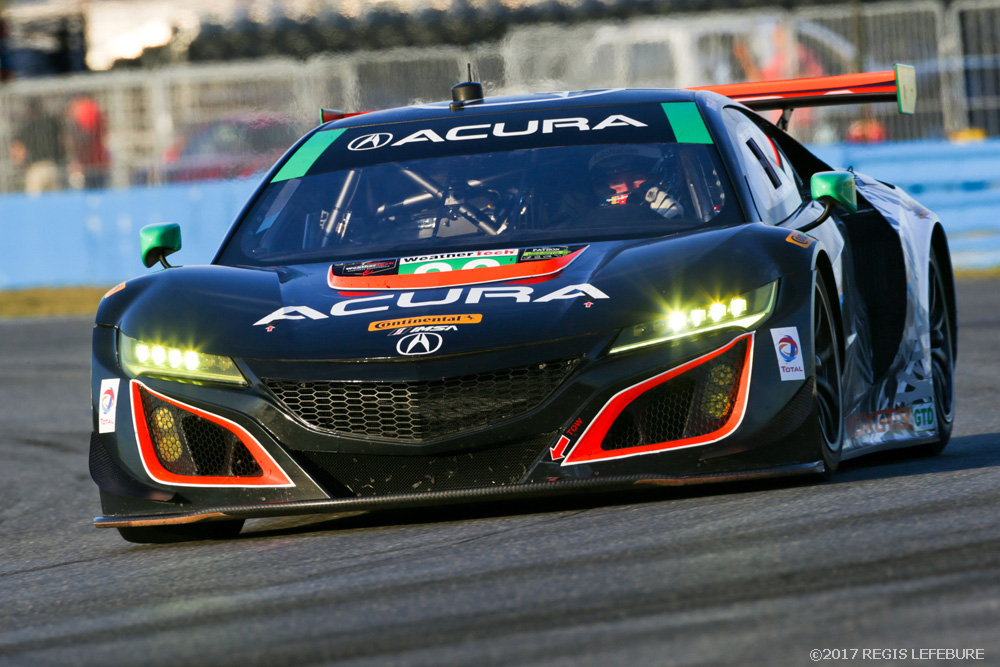 Michael Shank Racing has been tasked with running the brand new NSX GT3 partnered with the brand in its endurance programme, which is set to run parallel with RealTime Racing’s sprint-focused PWC campaign.

It’s a big ask for MSR, which clearly understands the magnitude of the challenge at hand here. It remains to be seen how competitive the car can be this early in its debut season, though BoP will as always be a leveling factor, no matter which side of the performance equation it sits early on. The main focus early has to be in the durability and serviceability department, which is is reported to be doing well in by its drivers.

Speaking of its driver crew, the #86 sees the combination of Jeff Segal, Oswaldo Negri Jnr who has driven with the team for a number of years in its prototypes, Tom Dyer and IndyCar’s Ryan Hunter Reay. The #93 meanwhile is set to be driven by Kathrine Legge who moves over from the DeltaWing project, with Andy Lally, Mark Wilkins and IndyCar veteran/Rolex 24 winner Graham Rahal. 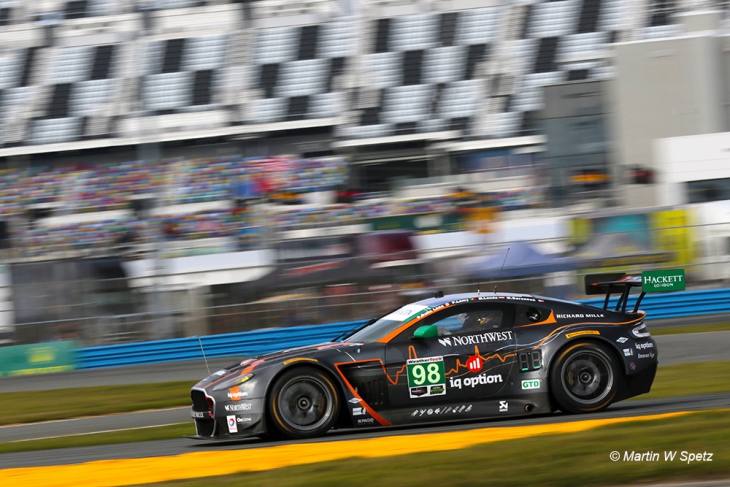 This year Aston Martin Racing has a small presence for the Rolex 24 Hours with just one entry. It is however a strong one, with its FIA WEC GTE Am race winning trio of Paul Dalla Lana, Pedro Lamy and Mathias Lauda joined by 2016 FIA WEC GTE Pro Drivers Champion Marco Sorensen.

The current Aston Martin Vantage GT3 is closer to the end of its lifecycle than the start, but it’s nevertheless still capable of winning races in the world of GT3 BoP.

This entry surely has the makings of a dark horse in the GTD class? 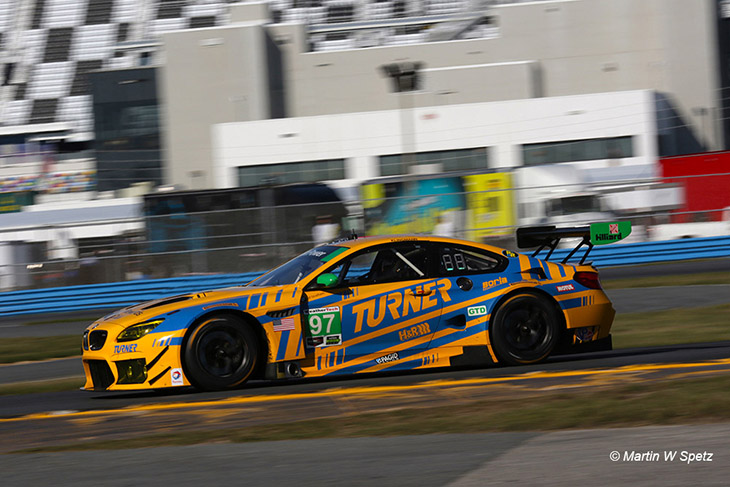 BMW’s presence in the class is a single car-effort too, with Turner Motorsport bringing one of its exceptionally turned out M6 GT3s to the party.

The M6 GT3 is now a proven winner in endurance races, after ROWE Racing stormed to victory at the Spa 24 last year, and is more than capable of challenging the frontrunners with Turner Motorsport’s crew behind it here.