Scuderia Praha headed into the second part of the 12 Hours of Mugello leading the standings after the first four hours of the race on Friday.

From the off though the #11 Ferrari, after setting pole earlier, was comprehensively beaten off the line, Matteo Malucelli emerging from the first turn back in fourth after being beaten into the first turn not just by fellow front row starter Robert Lukas in the #29 Forch Porsche, but by both second row starters too, the #911 Herberth Porsche pulling off a great move to grab the lead into T1, ahead of Lucas with the #21 Konrad Porsche of Marco Mapelli tucking in behind the Porsche pair.

The first phase of the race was then characterised by a fine battle between the leading quartet, Robert Renauer holding off Lukas, the #29 looking stronger on pure pace, the #911 seeming to have the edge in traffic.

The foursome were pulling away from a chasing trio of AMG GT3s, Tom Onslow Cole in the #30 RAM Mercedes pulling away from Bernd Schneider in the HTP machine with Dimitri Enjalbert closing in, and eventually passing both in the #17 IDEC Sport car. The AMGs though simply did not have the pace of the cars ahead it seemed

Lukas would finally get by into the lead after Renauer was briefly held up lapping a slower GT3 car but all too soon the second major talking point of the race started to take hold as the first of an eventual eight Code 60 periods in the first part of the race was called and strategy took centre stage.

So many different strategies were used by the leading cars though that it took much of the remainder of the four hour first part of the race for the true running order to wind back out, some cars taking fuel at more or less every opportunity, with driver changes and/ or tyre changes all coming into play too.

It saw a number of cars leading overall, both Porches, the #11 Ferrari, RAM and Hofor Racing AMGs and the Konrad Lamborghini all taking their turn at the head of a race that, by the four hour checkered flag saw some cars having taken two pit stops, and others inside the top 20 having taken seven!

By the overnight break there were a number of fancied runners in trouble, the #911 Porsche lost drive when running very strongly, the #21 Konrad Lamborghini had contact but was still in the mix – several others profited, then lost, through pit strategy under Code 60.

The #204 Vortex was a regular top ten car until a heavy shunt put the car into the barrier and out of the running.

By the flag there were just two cars on the lead lap, the Ferrari and surviving A6 (GT3) #29 Porsche.

In the classes there was early and terminal trouble for the #85 IDEC Sport 991 class Porsche after a heavy off, the Optimum Ginetta hit gearbox trouble and was towed away when leading SP3 (GT4) after the second placed BMW E90 had lost second place to the Nova Race Ginetta, which led at the break, the BMW having skated off into the gravel.

Part two, the remaining eight hours of the race, took place from 10am on Saturday, the sunshine though had disappeared, overcast and grey, threatening, but never producing, rain throughout.

Malucelli would restart in the Ferrari with Robert Lukas alongside and whilst the form book from the previous day favoured the Porsche off the line it was the 488 that retained the lead, an advantage it wouldn’t give up for the remainder of the race as problems struck several other cars again. 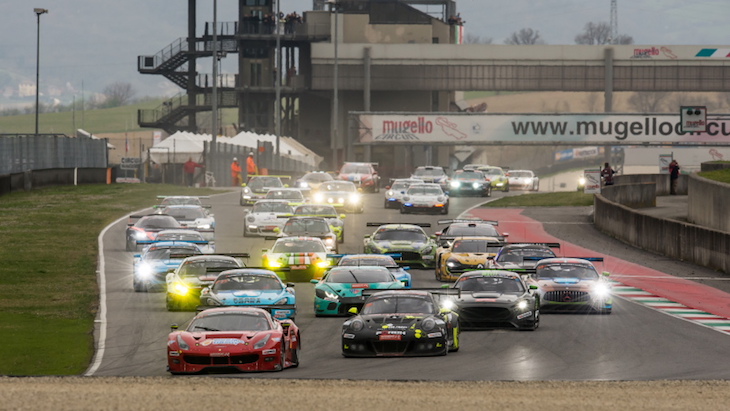 The Porsche was first to drop back, at first with a Code 60 pit strategy that simply didn’t produce the desired on-track results, but later with a slow puncture and then a rear body panel coming astray that took two attempts to fix, the team left to attempt a fightback from outside the top ten that ended inside the final hour with a left rear puncture seeing the team decide enough was enough!

The real on track battles turned out to be for the minor overall podium placings and for the A6 Am honours and whilst the #1 Hofor Racing Mercedes AMG GT3 had a relatively drama free run the same could certainly not be said for several others in the class, in particular the #16 sps Automotive AMG, running in a strong third in class for much of the day before becoming the entirely innocent victim of an incident caused by a mis-timed dive to the pit-lane from the #32 Car Collection Audi that saw the car clip a Porsche Cup car before being launched across the track to heavily impact the wall to the outside before coming back across the track into the path of the luckless Benz – big damage to both cars, out on the spot!

That elevated the sister SPS AMG (#24, Alexandre Coigny/Iradj Alexander David/Richard Feller) to third in class behind the leading class pair, the Michael Kroll/Chantal Kroll/Roland Eggimann/Kenneth Heyer/Christiaan Frankenhout combo winning out with another display of consistency winning the day, fifth overall, over the GRT Grasser Racing Team Lamborghini Huracán GT3 (#963, Mark Ineichen/Christoph Lenz/Roberto Pampanini/Milos Pavlovic) who finished four laps down after a puncture saw the car losing time in a careful run back to the pits.

The final drama though came after an engaging chase for third place overall, the #17 IDEC Sport AMG of Patrice and Paul Lafargue plus Dimitri Enjalbert having done enough to claim second place with another consistent run.

Tom Onslow-Cole too produced a clean and quick run to present Remon Vos with an opportunity to defend a podium position in the final hour from a charging Marco Mapelli in the #21 Konrad Lamborghini, Franz Konrad having been passed by the RAM Mercedes during his single stint (after the Konrad squad realised that they had to field a Bronze driver, 65 year old Franz fitting the bill nicely!)

Vos produced a fine effort in defence of his position, the Lamborghini factory driver closing at a rate that would have seen the Lamborghini on his tail only in the final few minutes until an error saw the AMG spin away a chunk of its advantage.

Mapelli was soon on his tail and through but then the timing screens flashed up with further dramatic news, the #21 dealt a 120 second penalty for an inoperative driver indicator, an issue that the team had suffered intermittently over both parts of the race.

That left no available time for the required gap to be eked out, the RAM crew, TOC and a pair of 24 H Series rookies in Vos and Kevin Veltman looking set to score a remarkable podium – until confusion reigned post race, the #30 car placed under the podium with the winning and second placed cars, but then the Konrad crew called to the podium. 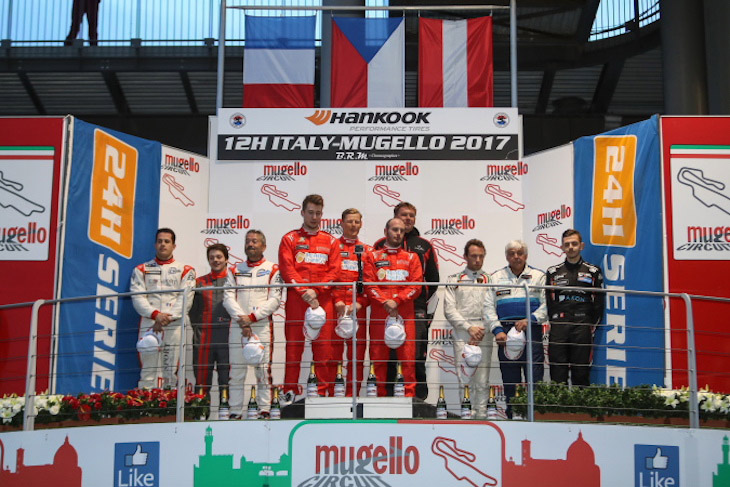 It took the Clerk of the Course to finally explain what had happened, the leader having passed the RAM car on its final lap the 120 seconds was negated, the Konrad car finishing the race a lap up, and therefore more than 120 seconds, on the RAM Mercedes – disappointment for a crew that had seen the position there for the winning, then effectively handed to them before being finally snatched away – There will be better days but fourth was, in any case, a good result.

In the supporting classes there was further trouble for the Optimum Ginetta squad, the car in the garage for a repair before bing despatched, only to almost immediately stop on track, unhappily just over a blind crest, Tom Onslow-Cole was just one of several cars to have a near miss with the stationary G55 before it was comprehensively collected by the #65 Porsche LOrient 911 GT3 Cup – significant damage for both cars putting them out on the spot, both drivers very lucky indeed to escape injury. 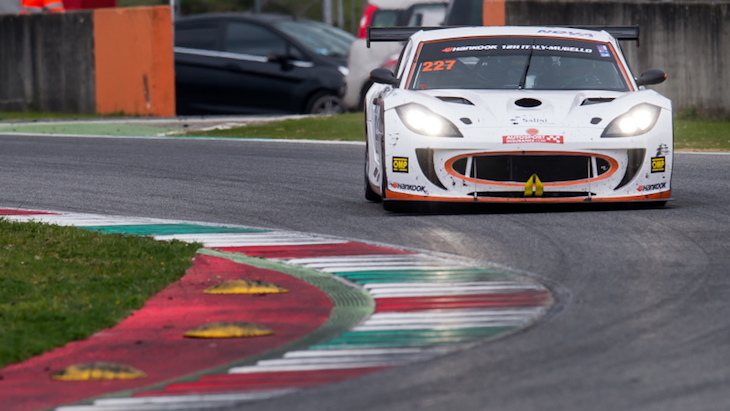 The SP3/GT4 class would go to the other Ginetta, the #227, (Luca Magnoni/Philippe Salini/Luca Rangoni) Nova Race team scoring a repeat win at this event after a fine and trouble-free effort in a class that saw problems for all of the other runners with the #114 BMW E90 coming home second despite a front left tyre failure on the main straight that saw the car requiring recovery. The Besaplast Racing Audi TTRS (#233, Franjo Kovac/Milenko Vokuvic/Tomáš Pekař) came home third.

The 991 class win went to the #85 ProSport Porsche of Charles Espanlaub, Charlie Putnam and Joe Foster with a well paced run through Saturday, the team’s only issue a bonnet that came astray at one side for a stint, but still a solid enough run to take advantage when the leading MSG Porsche faded, the #67 Olimp Racing by Lukas car would complete the podium.

SP2 went to another Porsche, the #78 Speed Lover Porsche 991 Cup (Pierre-Yves Paque/Jean-Michel Gerome/Christian Kelders) from the B2F compétition #35 Porsche 991 Cup (Benoit Fretin/Bruno Fretin/Michel Mitieus) and the #203 Vortex V8 GC Automobile GC 10 V8 (Martin Gøtsche/Nanna Gøtsche/Florian Revaz), the third placed car surviving a cockpit fire that seemed to be cused by a build up of rubber pick up ignited by the hot engine!

Despite a wheel bearing issue in the end of part one, the only CUP1 car, the Bonk Motorsport BMW M235i Racing Cup (#145, Axel Burghardt/Jürgen Meyer/Michael Bonk/Matthias Schrey), reached the finish line in 33rd position overall.

After having lost the A2 class lead in the end of the first part, the Team Eva Solo/K-Rejser Peugeot RCZ (#171, Jacob Kristensen/Jan Engelbrecht/Henrik Sørensen) went back to the top right after the resumption to take home their second victory of the season. The Stanco&Tanner Motorsport Renault Clio III (#112, Andy Stanco/Armando Stanco/Stefan Tanner) finished in second place by a narrow margin to the Endurance Team Romania Toyota GT86 CS-V3 (#173, Sergiu Nicolae/Stefan Unchiasu/Mihai Costin/Fabrizio Broggi), that ended up on the podium on their championship debut.