Blink and you would have missed it, as the Wayne Taylor Racing Cadillac of Jordan and Ricky Taylor took its third-straight victory at the Sports Car Grand Prix at Long Beach, the third round the 2017 IMSA Weathertech SportsCar Championship. The #10 Konica Minolta Cadillac of Jordan and Ricky Taylor finished just over six seconds ahead of the Tequila Patron ESM Nissan pairing of Scott Sharp and Ryan Dalziel after late drama saw the class leads in both Prototype and GTLM change.

Dalziel had been keeping the Cadillac at bay until GT traffic on Long Beach’s start/finish straight allowed Jordan Taylor to slip into the lead into Turn 1. In a race of attrition it hadn’t all been plane sailing for the Cadillacs. The #5 Mustang Sampling machine being driven by Christian Fittipaldi clipped the GTD class-leading #50 Mercedes into Turn 7 requiring a rear bodywork change.

However due to the pitstop counting as an emergency pitstop rather than a standard fuel and tyre affair the damaged #5 had to do a lap without a rear wing before coming in.

The #31 Cadillac hit trouble too, Dane Cameron was chasing Ricky Taylor hard before clipping the inside wall at turn five sent him head first into the tyre barrier. Cameron remained uninjured but it resulted in another lengthy caution period, one of five during the course of the race.

It was a better race weekend for the pairing of Jonathan Bomarito and Tristan Nunez, the #55 Mazdi Dpi duo briefly keeping in touch with the Nissan/Cadillac tussle at the start of the race, the powerful four cylinder engine allowing them to be light on their feet. However the timing of the yellows meant that they fell back to 15 seconds behind the overall winner by the end of the race.

The non-Manufacturer cars however, struggled around the tight street circuit at Long Beach. JDC-Miller’s #85 ORECA and the PR1 #52 Ligier ended up crossing the line just three seconds ahead of the class-leading GTLM Corvette.

In GTLM it was controversy at the final corner which decided the result. Coming into the last lap the #4 and #3 Corvettes were running line-astern with Antonia Garcia/Jan Magnussen looking set to take an important victory.
However at the final tight hairpin three GTD cars had collided leaving only a one car wide gap on the inside. Garcia, being the first GTLM car on the scene, had taken the wide-line into the corner and was consequently blocked from turning any further. 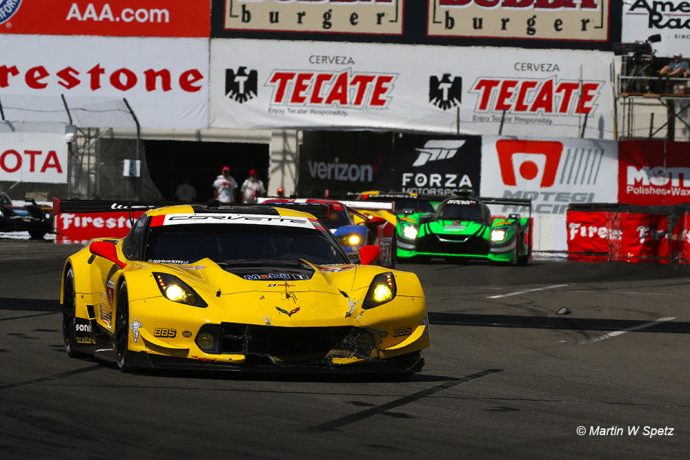 Oliver Gavin, driving the #3 Corvette waited patiently given the yellow flags were waving expecting Garcia to find a way to move through the gap. This did not occur and Gavin slipped through to take an unlikely victory for himself and Tommy Milner but an important one for Corvette.

Indeed it had been a closely fought contest as usual in the GTLM class with each of the manufacturers at different moments in commanding positions in the race.

At the start however, it had been chaos between Ford and Ferrari and the #22 ESM Nissan. Going with through turn six Ed Brown in the #22 had got caught between the #67 Ford driven by Joey Hand and the #62 Ferrari of Toni Vilander. The resulting contact sent Vilander into the Turn 6 wall causing terminal suspension and bodywork damage to the Ferrari as well as suspension damage to the Nissan.

Hand was able to carry on and hand over to Dirk Müller who would later on collide with the #911 911 of Dirk Werner, losing part of the Ford’s front bodywork.

The biggest story though of GTLM was that of the #24 BMW M6 run by Martin Tomczyk and John Edwards. As a result of doing their single pitstop under an early yellow flag thirty minutes into the race the pair were able to take the overall lead.

Due to the nature of the tight and narrow Long Beach circuit and the pitting Protoypes getting stuck in traffic the BMW pair were able to hold off a strong challenge from BMW and Corvette as the race entered the final ten minutes.
Luck was not with them however as the fifth and final yellow, caused by Dane Cameron crashing at turn six came out, closed up the pack and took away the only defence the GTLMs had, that of the traffic.

It was to get worse for the #24 pair however as not long after the restart they experienced mechanical issues on the back straight forcing them to slow down and come home seventh in class.

With everything going on all around them GTD was a far less dramatic affair. The #50 WeatherTech Mercedes GT3 of Cooper MacNeil and Gunnar Jeannette taking victory by one lap to their teammates Jeroen Bleekemolen and Ben Keating to complete a Mercedes 1-2. 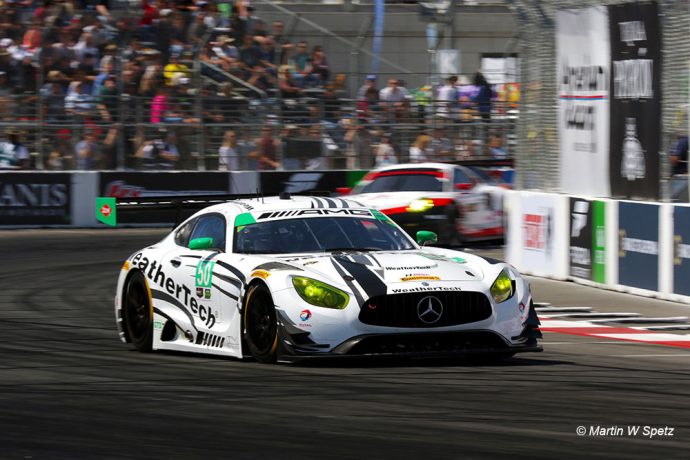 Behind the Christina Nielsen and Alessandro Balzan finished a respectable third in class after avoiding the traffic jam at the final corner. The Park Place Porsche pairing of Jorg Bergmeister and Patrick Lindsey ended up fourth.