Ferrari and Lamborghini took the top three slots in qualifying for the TM Performance 3 Hours of Monza after Alessandro Pier Guidi in the #50 Spirit of Race Ferrari F488 GT3 put in a 1:47.423 on his final lap to take pole position. Qualifying in second, again on his last lap in Q3, was Norbert Siedler who set a 1:47.485 in the #19 GRT Grasser Racing Team Lamborghini Huracán GT3. 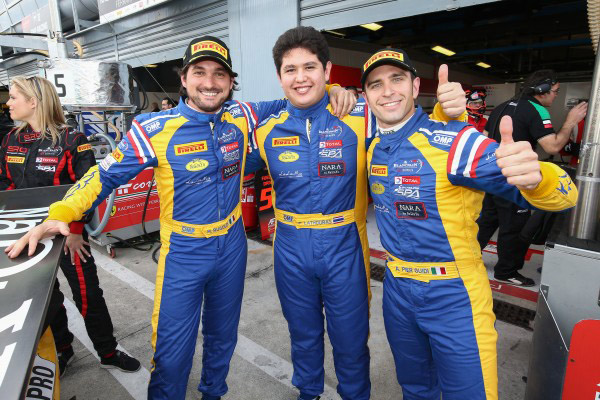 Third quickest, after looking like he may have clinched pole for much of Q3, was Davide Rigon in the #72 SMP Racing Ferrari F488 GT3 who set a 1:47.510 early in the session.

Quickest of the Pro-Am entries was the #97 Oman Racing team with TF Sport Aston martin V12 Vantage in which Jonny Adam set a 1:47.807 in Q3.

Qualifying got underway on time but Q1 was red-flagged with less than four minutes run after the #66 Attempto Racing Lamborghini Huracán GT3 with Giovanni Venturini at the wheel ploughed into the back of the #2 Belgian Audi Club team WRT Audi R8 LMS piloted by Nathanaël Berthon. The session resumed after five minutes.

Topping the time-sheets after Q1 was Lucas Ordonez in the #23 Motul Team RJN Nissan who set a 1:48.658 after considerable set-up changes to the car overnight.

As fuel loads dropped, times started to tumble in the second session when Raffaele Giammaria in the#19 GRT Grasser Racing Team Lamborghini Huracán GT3 broke into the 1:47s with a 1:47.999.

GRT Grasser Racing Team won the opening round of the 2017 Blancpain GT Series Endurance Cup when Christian Engelhart took the chequered flag in the #63 Lamborghini Huracán GT3 he shared with Mirko Bortolotti and Andrea Caldarelli. 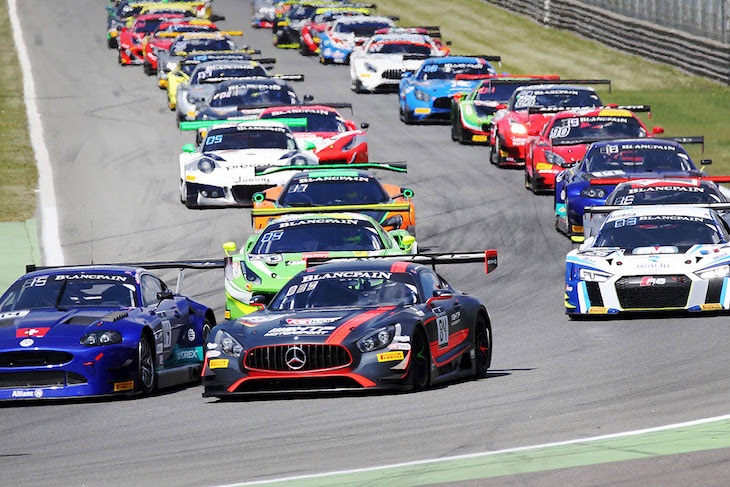 The Pro-Am category witnessed a thrilling battle between the #97 Oman Racing Team with TF Sport Aston Martin V12 Vantage driven by Ahmad Al Harthy and Jonny Adam and the #11 Kessel Racing Ferrari F488 GT3 driven by Michael Broniszewski, Andrea Rizzoli and Matteo Cressoni. The #97 Aston Martin took the lead in the final minutes of the race and held on for the victory in what must be regarded as one of Adam’s finest races.

In the Am class it was victory for the #961 AF Corse Ferrari F488 GT3 in which Alex Demerjian and Davide Rizzo were joined for the weekend by Abbie Eaton, moving to an alternative Italian marque after campaigning the Maserati GT MC GT4 in the British GT Championship in 2016.

The race got off to a chaotic start after contact at Turn 1 between the #7 Bentley Team M-Sport Bentley Continental GT3 driven by Guy Smith and the #19 GRT Grasser Racing Team Lamborghini Huracán GT3 with Ezequiel Perez Comoanc at the wheel caused the Lamborghini to spear sharply to the left and spin into the following pack. The resulting accident meant the retirement of nine cars and a red-flag period to allow the track to be cleared. The race was re-started behind the safety-car after a pause of 25 minutes.

Following the re-start the #7 Bentley team M-Sport car was given a 15 second stop-go penalty for causing the accident, a punishment which the team appealed against. Smith was kept out in the #7 Bentley Continental GT3 until he was shown the black flag after 30 minutes.

Meanwhile, the #72 SMP Racing Ferrari F488 GT3, with Miguel Molina at the wheel, continued to lead and, after the departure of the #7 Bentley, held a slight advantage over the #63 GRT Grasser Lamborghini in which Mirko Bortolotti had taken the opening stint.

After the first driver changes had cycled through, positions were reversed and it was Andrea Caldarelli in the #63 car who took the lead, with Victor Shaytar in the #72 entry some 12 seconds behind with 90 minutes to go.

The #63 car retained the lead after the second round of driver changes put Christian Englehart in the Lamborghini and Davide Rigon in the #72 Ferrari F488 GT3. Rigon went on to receive a 15 second penalty for a yellow flag infringement which pushed the #72 Ferrari down the order for an eventual fifth place finish.

Mirko Bortolotti, who took the first stint in the #63 Lamborghini was delighted at the win.

“First of all, I’m happy that everybody that was involved in the crash at the beginning is fine and I’m really, really happy about this victory. We’ve worked so hard for this over the whole winter.”

Team-mate Christian Engelhart was also very happy to be on the top step of the podium. 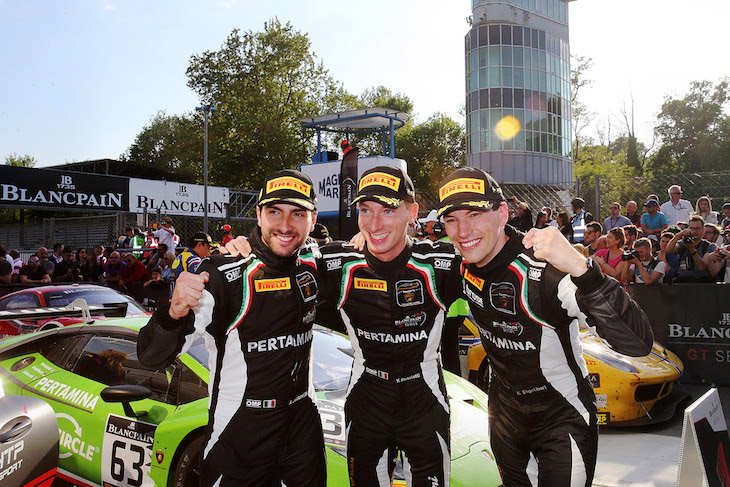 “It was a great day out there for me,” said Engelhart. ”The last time I was at the Nürburgring it was as a private Lamborghini driver and now I am proud to be here representing the factory. To start the year like this in the Endurance Cup is amazing. I’m really happy for the whole team and the company. It’s awesome!”

Pier Guidi in the #50 Ferrari was battling for second place with Clemens Schmid in the #75 ISR Audi R8 LMS for second place as the race entered its final laps. A tyre failure for the #75 car, however, saw Pier Guidi promoted to second, where he finished the race.

In the Pro-Am class, Ahmad Al Harthy led the category in the #97 Oman Racing team with TF Sport Aston Martin V12 Vantage from pole position established by team-mate Jonny Adam earlier in the day. Al Harthy then double-stinted, but after the driver change, Jonny Adam found himself over 10 seconds adrift of the class-leading #11 Kessel Racing Ferrari F488 GT3 with Andrea Rizzoli at the wheel. Adam had to contend with traffic between himself and Rizzoli but, once past, he set his sights on chasing down the #11 entry. With less than five minutes remaining, the double-British GT champion took the lead which he held on to for the victory, the Omani National Anthem played for the first time at the Italian circuit! 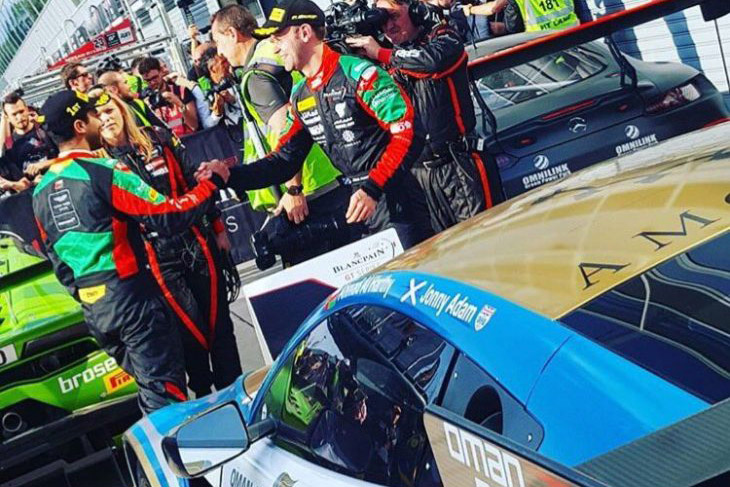 “It was qualifying laps for my stint and the car gave me that,” said Adam. “We’d worked hard on the set-up over the weekend. We made a few more changes for the race and it was perfect. Ahmad’s two stints were perfect and it was collective effort”

The Am class was not without its dramas. The #961 AF Corse Ferrari F488 GT3 had to undergo a complete gearbox change in the hour leading up to the start. Four Am entries took the start shortly after which the #888 Kessel Racing Ferrai F488 GT3 with Marco Zanuttini at the wheel was eliminated in the race-start chaos.

The #488 Rinaldi Racing Ferrari F488 GT3 with the driver line-up of Pierre Ehret and Rino Mastronardi held the class lead for much of the race and, with less than hour to go, Mastronardi was a lap ahead of Davide Rizzo in the #961 AF Corse entry. Bad luck, however, was to strike the #488 entry and it came into the pits in the last hour with steam pouring from the engine compartment and was wheeled into the garage and retirement, promoting the AF Corse entry into the class lead.

The next round of the Blancpain GT Series Endurance Cup takes place at Silverstone on May 13 -14.