Asian-based Eurasia Motorsport will return to the Le Mans 24 Hours for a second consecutive year in 2017 with a Ligier JSP 217 LMP2 car driven by a trio of 2016 ELMS LMP3 racers.

Erik Maris will be joined in the car by father and son, Jacques and Pierre Nicolet.

“We are delighted to further cement our relationship with Ligier, having run the 2015-16 Asian Le Mans LMP3 Championship winning Ligier along with victory in the 2016 Asian Le Mans Sprint Cup,” said Team Principal Mark Goddard. “Our aim is to finish what will be as ever a grueling race. With two bronze drivers, our expectations are realistic, however a trouble-free run can pay huge dividends and we want to make sure we are there at the flag with Ligier.” 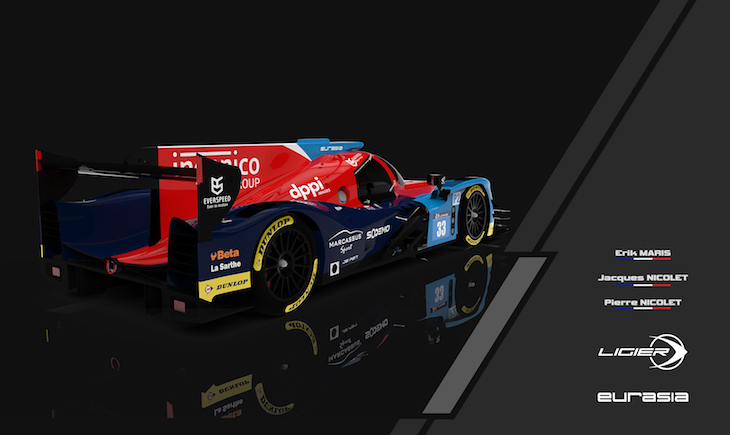 The 2017 event marks Eurasia Motorsport’s second 24 Hours of Le Mans. Last year the team finished in fifth position in class, the first non WEC team across the line. This year’s driver line-up are all familiar with each other, having raced alongside each other in the European Le Mans Series last year.

Erik Maris competed in both LMP2 and LMP3 machinery last year in the Le Mans 24 Hours and European Le Mans Series respectively. Prior to that the Frenchman competed in selected rounds of the 2015 WEC in the LMP2 class, including Le Mans 24 Hours, and ran in GT classes in various series, classic and modern, since 2012.

Jacques Nicolet competed alongside Erik Maris last year with a Ligier JS P3 in the European Le Mans Series. Prior to that, he began racing in 2001 and ran in various endurance international series, including 8 participations to Le Mans 24 Hours from 2007 to 2015, in LM P1 and LM P2 classes.

Son Pierre competed last year with his father in the Road to Le Mans as well as the ELMS. From 2011 to 2015, he evolved in different series and categories, including notably single-seater and CN among others.

The entry had initially named Sir Chris Hoy as a driver though that prospect is understood to have disappeared some time ago.