Threading through the Ardennes forest, the famous Spa Francorchamps was the scene of round two of the FIA World Endurance Championship. Spa is a driver’s favourite and I’m certainly no different. I think the circuit is actually much tougher in a GT car compared to when I raced here in LMP2 or F3. Corners like Eau Rouge and Blanchimont aren’t just little kinks in the road when you’re driving a 1250kg GT car! They require maximum commitment if you want to stay flat out!

Practice went well for the #67 car as we finished 1st, 3rd and 3rd in the three sessions. For qualifying Andy and I combined for P3 on the grid. We only did one lap each on a single set of tyres. While we would have liked to have been on the front row of the grid, we were certainly in good shape for the race, where tyre life would be key.

I started, and after the usual first corner tussle and slipstream up to Les Combes the front of the field settled down during the first half an hour as Davide Rigon, Olivier Pla, myself and James Calado pulled clear of the Porsche 911s and Aston Martin Vantages. While these cars don’t have the downforce of a single seater or a prototype, they still create enough dirty air to make it difficult to pass, especially in the middle sector. 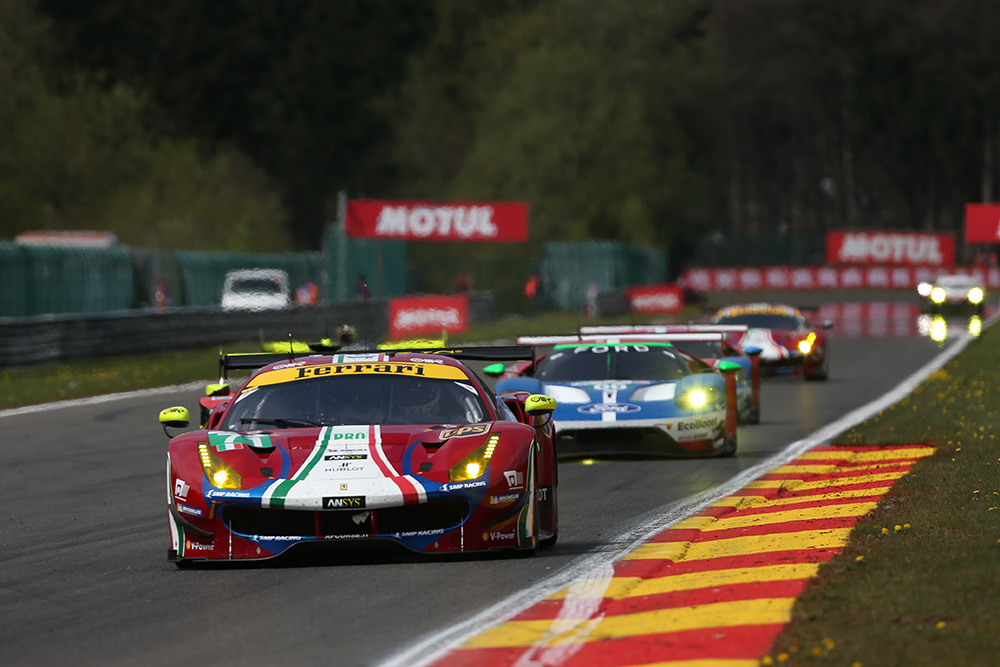 It didn’t take long for things to hot up however. When Oli was delayed by a backmarker going through Eau Rouge, I had a good run on him up the Kemmel straight to pull to the inside for the pass up to 2nd. What I didn’t realise was that Calado had an even better run on the outside of Oli and he was well ahead of me on the braking to Les Combes, passing both of us. A net equal for myself, but definitely a big gain for the spectators and viewers at home!

I could tell the Ferrari’s tyres were starting to go off and a lap and half later I had a lunge down the inside at turn one to take 2nd place permanently. I then set off in pursuit of Rigon, who was 4/5 seconds down the road after scuttling away while all the action was taking place behind him. It didn’t take me long to latch onto the gearbox of the #71, but it was time for the first round of pit stops before I had an opportunity to make a pass for the lead.

At this point the race unravelled for us. After 86 litres of fuel and two new tyres had been fitted I was sent on my way. But the car stalled almost immediately and when I restarted I had little to no power. We had a fuel priming issue and I had to do two full resets of the car before everything was back on song.

It all gets very hectic when you’re parked at the bottom of Eau Rouge, cars flying past you at 250kph+

This lost us about one minute twenty seconds and in a formula as close as the GTE Pro World Championship, we had a mountain to climb. I must say the Ford engineers did a brilliant job of diagnosing and guiding me through the process in the car. It all gets very hectic when you’re parked at the bottom of Eau Rouge, cars flying past you at 250kph+ and you can see your victory hopes evaporating before your very eyes.

There was no time for getting down however, Spa takes no prisoners and I had to get on with job or it would have been easy to throw the car in the fence. I was about 40 seconds behind the two Aston Martins and I just got my head down and drove as fast and consistently as I could. I caught and passed both of them by the end of my second stint before handing over to Pipo Derani. 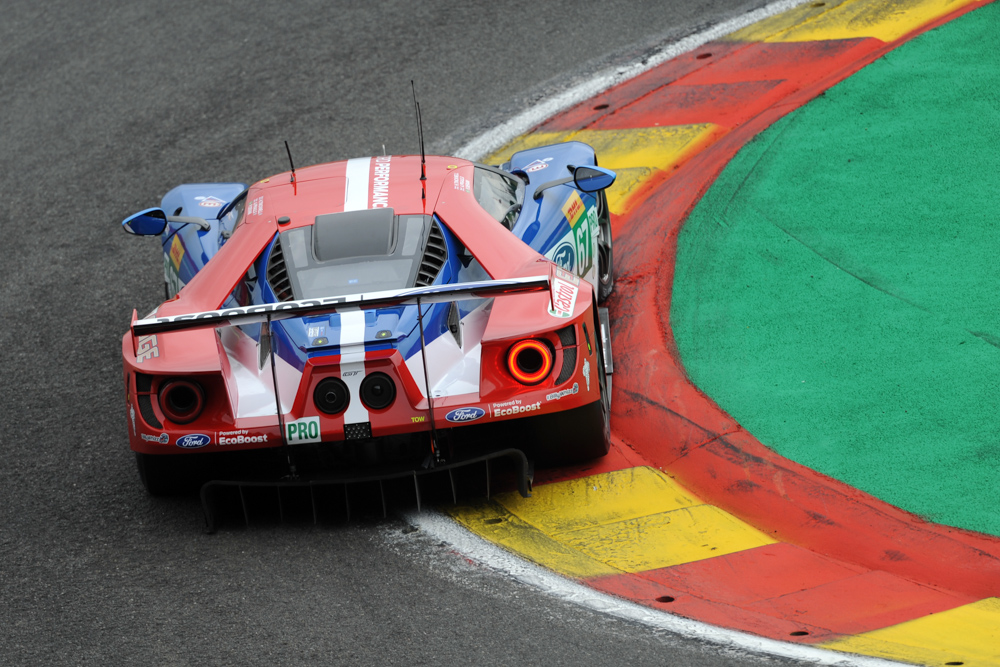 Pipo’s rapid transition from prototypes to GTs continued at Spa and he was straight on it hunting down the first of the 911s. After a couple of laps of dicing, he made a great pass to move up to 5th. Our pocket rocket is a tremendous addition to the #67 and I am really enjoying seeing his work ethic be rewarded with faster lap times and consistency as he gets to know the Ford GT better.

Andy finished the race off with a double stint. He had the second Porsche of Fred Makowiecki in his sights and pulled off the move of the race in my opinion, as he out braked the Frenchman round the outside of the entry to the Bus Stop chicane. This gave him the inside line for the final left and he squeezed into a Ford GT sized gap for 4th. Simply fantastic, there’s life in the old dog yet!

While we were ultimately disappointed to miss out on a podium, we left Spa still leading the championship

While we were ultimately disappointed to miss out on a podium, we left Spa still leading the championship and the way everyone on our side of the garage was disappointed with that, yet content with a serious fight back for 12 valuable points shows the atmosphere and determination we’ve built inside Ford Chip Ganassi Racing this season.

We’ve got a busy period coming up, an endurance test at Motorland Aragon, followed by a simulator trip to Multimatic’s HQ in Canada are in the diary for the next two weeks. Then it’s back to Spa for another two days of testing before we head off to the Le Mans test weekend. It’s a hectic schedule, but I’m already looking forward to letting you know how it all went in my next piece as we build up to the holy grail of endurance racing! See you there!