The ACO showed solidarity with the victims of Saturday night’s terror attack in the UK capital, and with the wider citizens of London and the UK with the display throughout the test day of the Union Jack flown at half mast with a black ribbon. (Above)

All systems go for Keating Motorsports

It was a wild weekend for Ben Keating, Jeroen Bleekemolen and Ricky Taylor. The trio, who raced over in the States yesterday in the IMSA race at Detroit, flew straight over after the track action. Today they’ve turned the first laps in the Riley Mk.30 at Le Mans with Keating Motorsport. 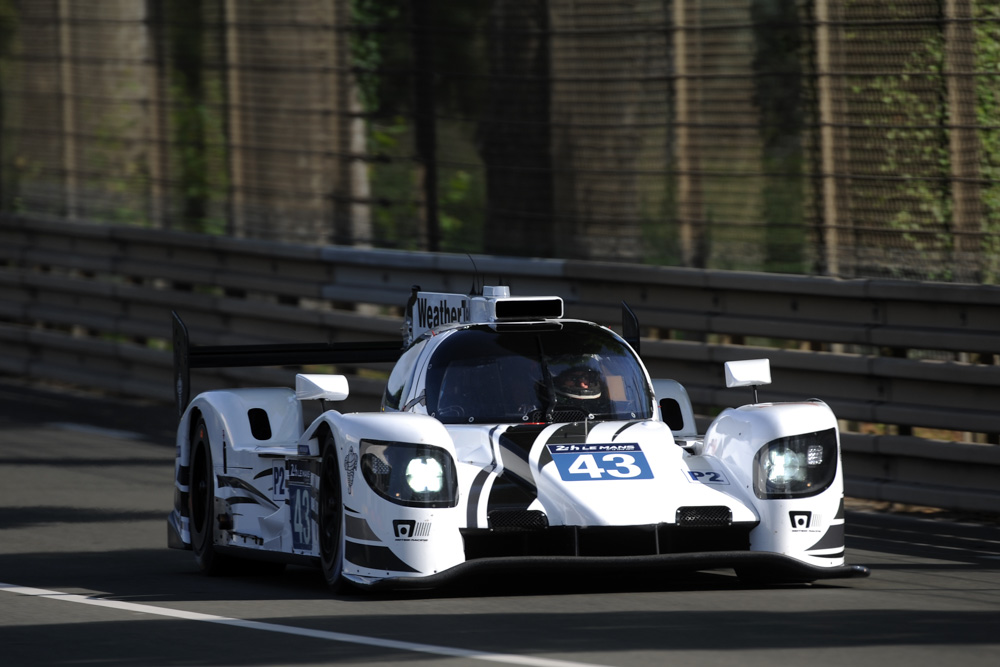 “It’s been a short night, I wanted to get as much sleep as possible, but I didn’t get much!” Keating told DSC. “There were about nine of us, with some Scuderia Corsa guys, who left the circuit and flew into Angers. We got in about 6am.”

The American, who had an off at Belle Isle is now nursing a wrist injury, though he has assured DSC that he will race and hopes it will be fine.

The Test Day has been an important one for the team, which only received its car from Riley about six weeks ago. They’re debuting the Le Mans aero in public here too.

Keating also told DSC that the team is made up of some older faces from his previous efforts racing at Le Mans, some Riley engineers and with support from the Visit Florida team in IMSA (running a Riley) which is freighting parts over to France for them to use during race week.

Matthieu Vaxiviere, who injured himself in training, managed over 20 laps on track today in the TDS Racing Oreca, making the chances of him racing in the Le Mans 24 Hours high.

“I think we’re 90 percent sure he’ll race,” his teammate Francois Perrodo told DSC. “Matthieu has run over 20 laps, his foot isn’t perfect, but with the extra week between this and the race, we’re confident he’ll be ok.

“Nicky (Catsburg) was as a Plan B though, and was quick though, it’s been a good day.”

Busy day for Will Stevens

JMW Motorsport driver Will Stevens, had a manic Sunday, managing to complete his minimum 10 laps at Le Mans with the British team in its new Ferrari 488, before heading straight to Zolder for the Blancpain Sprint Cup race at midday. 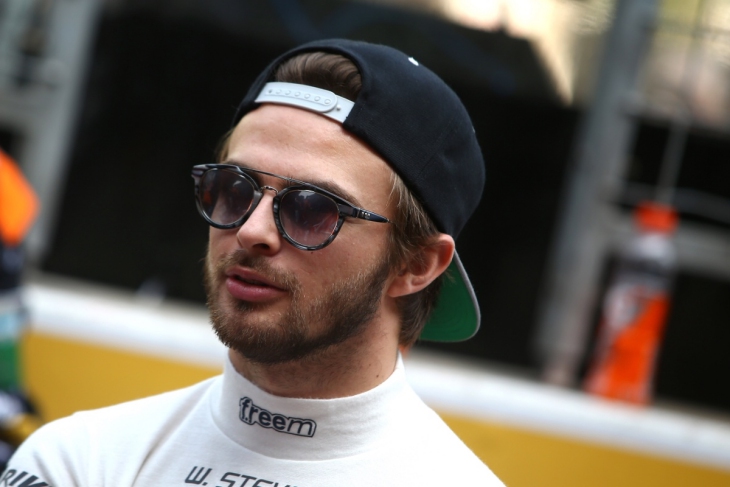 Not only did he have a positive day at La Sarthe, he then went and won the Main Race in Belgium for WRT Audi.

AMR boss John Gaw spoke to DSC earlier today about the GTE Pro class at the Test Day, and remained positive about the British team’s day out on the Circuit de la Sarthe.

“This is about where we expected it,” he said. “The only thing is that the Fords appear to be off. Up and down the order though, it’s been good. The 3:54 times at the top is what we expected.”

In the afternoon session, AMR’s Pro division focused on the tyre runs, with the circuit rubbered in and less dirty than during the morning action, its cars finishing up fifth and sixth in class. 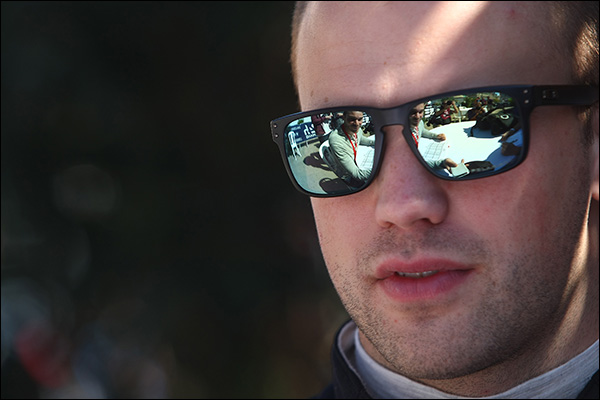 And at points during the day test he topped the class times in both of his mounts.

The Belgian star is nominated as reserve driver for the Porsche GTE Pro team and looks certain to join the G-Drive Racing squad alongside Roman Rusinov and Pierre Thiriet for the 6 Hours of the Nürburgring, Round 4 of the 2017 FIA WEC.

Foster excited on first day of racing at La Sarthe

DSC spoke to a jubilant Nick Foster, the Australian Le Mans rookie, who turned his first laps on the circuit today in Gulf Racing’s Porsche 911 RSR.

“I can’t believe it, I’m so excited and pumped to get out there on the circuit. After coming last year and camping as a spectator, being a part of this is just incredible. 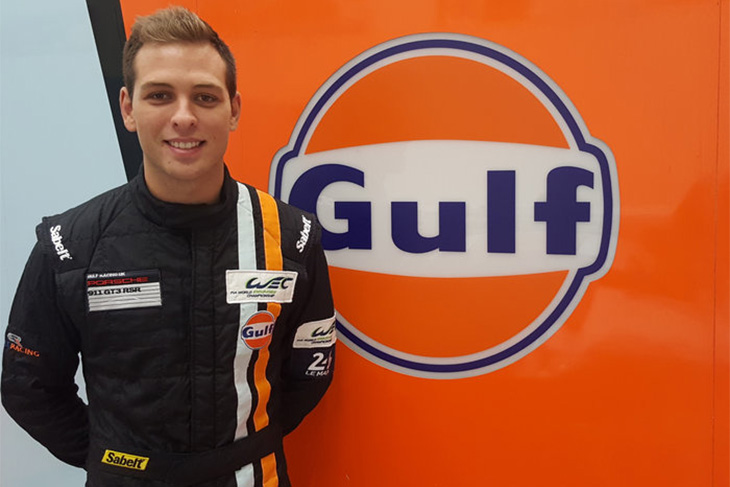 “Today we’re taking it easy. It’s about getting my 10 laps later today, and Mike (Wainwright) getting track time. We’ll be trying out a few things to make sure the car is as well set up as it can be.

“Because we get so much track time during race week, the pressure is off a little here.”

Minassian a late addition to the Test Day Entry

Ex-Peugeot factory driver and now DragonSpeed Sporting Director Nicolas Minassian was a late addition to the entry list in his role as DragonSpeed’s nominated reserve Pro driver and he duly completed his laps in the #22 G-Drive by DragonSpeed ORECA Gibson indicating that the team are ensuring that if full-season driver Ryo Hirakawa is required by the factory Toyota team they have a Plan B. The still very fast Frenchman was still very much on the pace posting times very close to his Japanese team-mate despite lapping with rather older Dunlop rubber.

Ex-Formula One legend and now Le Mans 24 Hours rookie Rubens Barrichello, made his first on-track appearance at Le Mans since 1992 at the Test Day

The Brazilian tested on the Bugatti 25 years ago when he was a Formula 3000 / Reynard 92D Judd driver. He finished 3rd in the F3000 championship in 1992 behind Andrea Montermini and the champion Luca Badoer. One year later, he joined Eddie Jordan’s F1 team.

Barrichello was though rather less than complimentary about the Dallara low drag kit which, whilst blindingly fast in a straight line, the #47 Cetilar Villorba Corse car setting the fastest trap speed of the test in any class at over 341 km/h (almost 212 mph) struggled (indeed failed) to translate that into an ultimately competitive lap time, Barrichello scoring the best Dallara lap time, a 3:33.669, 15th in class behind 13 Orecas and the United Autosports Ligier of Filipe Albuquerque.

“The car is fast in a straight line, in fact I think too fast, they have gone too far in one direction (on the aero solution), at times in the corners it felt like the car wasn’t connected to the ground.”

Onroak Automotive’s Philippe Dumas was rather less than impressed with the results of the Test Day for the seven Ligier JS P217s on the entry, the best scoring just 14th place in the order, ‘best of the rest’ behind no fewer than 13 ORECA 07 Gibsons, Filipe Albuquerque posting a 3:33.581 in the afternoon session in the #32 United Autosports car. 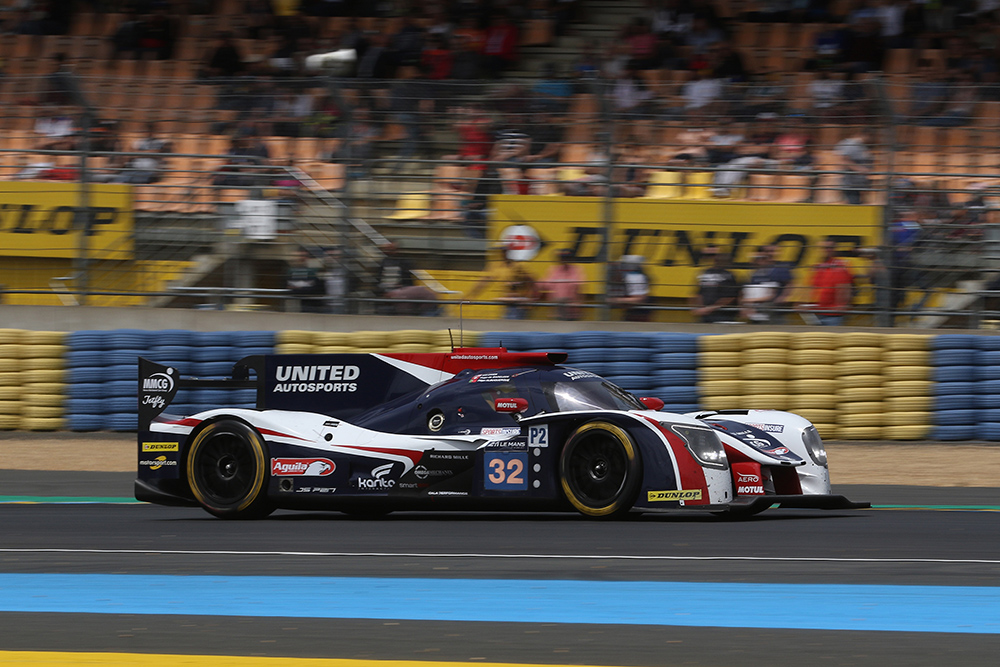 “The order is barely surprising when you consider that one car had a substantial developmental advantage (the Oreca 07 upgradeable from the previous 05 chassis whilst the other three 2017 cars had to start from scratch), plus their experience in LMP1 with the Rebellion and having the facilities at Toyota to help with their aero development (the ORECA design team utilising the facilities at TMG in Cologne, ORECA also holding a role of technical and logistical support for the Toyota Gazoo Racing LMP1 factory team in the FIA WEC.) ED – This is specifically denied by an ORECA spokesman who says that TMG facilities were not used in the development of the ORECA 07.

“I am though, surprised at the gap between the ORECA 07 and the rest.  We have some hard work ahead.  It will be interesting to see what happens next.  With two weeks before the race here that gap is not going to be closed.”

The difference in pace between the fastest Oreca and fastest Ligier was over 3.7 seconds with still o.5 seconds between the 13th fastest ORECA and Albuquerque’s time in the #32 Ligier.

Larbre Competition Team Principal Jack Leconte perhaps unwittingly has revealed the existence of a BMW Art car project for 2018 – and the involvement of his driver Romain Brandela in the selection process.

Brandela is currently BMW France’s public events manager. It is apparently through that selection process that Brandela and Leconte met Ramzi Adek, the artist who took care of Larbre Competition’s Corvette livery.

A typically self effacing tweet from Martin Brundle pointed out that his own overall pole position time for the 1999 Le Mans 24 Hours in the, let’s face it hardly lacklustre, Toyota GT-One (3:29.9) was blown away by the best effort of his son Alex in the #37 Jackie Chan DC Racing Oreca Gibson in LMP2 at the 2017 Test Day (3:29.1)!