A major shunt in the Porsche Curves red-flagged the tail-end of the practice session for the Road to Le Mans support package and delayed the start of first qualifying for the 24 Hours while repairs were carried out to the barriers. After some conflicting on-screen directives, the decision was taken to abandon the RTLM practice session, and qualifying proper for the Le Mans 24 Hours didn’t start until just after ten-twenty. The session would be truncated to 1 hour 40 minutes.

The down-side to this was that the best of the evening’s light had already gone, and with the track cooling rapidly, that favoured sweet spot for some quick lappery before full dark set in was missed. Unsurprisingly, the drivers were keen to get out on track …

Impressively, several P1s set purple sectors on their out-laps, and with a sense of time lost, Timo Bernhard converted his into a new fastest lap of the day by of 3:19.710 for the #2 Porsche 919.  Buemi tucked in 3/100ths behind, leading the three Toyotas, before Jani leap-frogged the #7 car for third quickest. 2.1 seconds covered the top five. 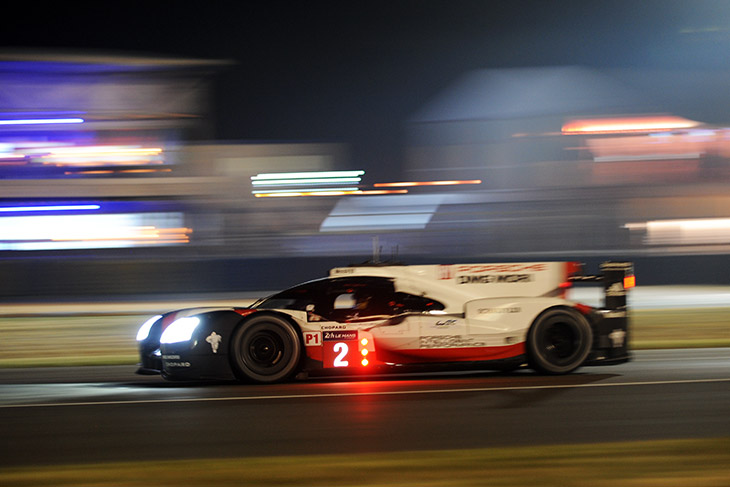 More purple sectors next time around weren’t ultimately converted into improvements, but the signs were clear … not only was Porsche capable of better pace than they’d shown in testing, but we had a proper race on our hands.

Three flyers later, and it was clear just how close it was going to be, with Kazuki Nakajima posting a 3:19.744 for the #8 Toyota, and then Nicolas Lapierre (#9) almost matching that with a 3:19.958 – just two-tenths covering the top three. 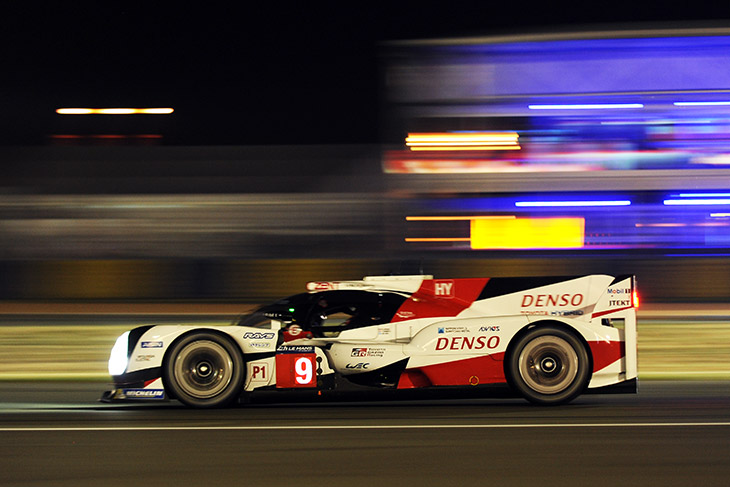 Dominik Kraihamer’s first flying lap was good enough to place the ByKolles CLM back at the tail of the LMP1 field, but comfortable clear of the chasing LMP2 pack, where the situation was almost as frenetic. The CEFC Manor Oreca #24 headed the class in the hands of Jean-Eric Vergne on 3:30.847 after pipping Thomas Laurent in the Jackie Chan DC Racing #38 by two tenths.  Last Sunday’s quickest, the #35 Alpine, stood third with Nelson Panciatici on 3:31.024. 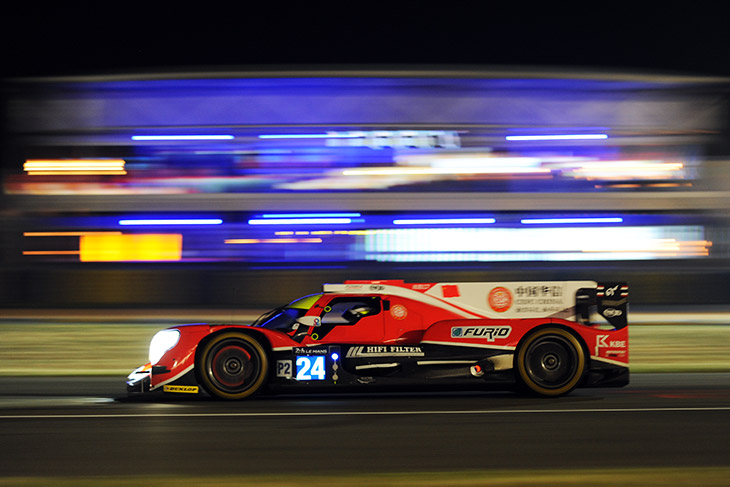 All was not rosy in the Cetilar Villorba Corse garage, where the #47 Dallara continued its somewhat troubled Wednesday, crawling back to pit entrance and being wheeled into pit lane; total lack of illumination in the cockpit suggesting some form of electrical malaise.

Twenty minutes into the session, and Kobyashi improved in both the second and third sectors to sweep through to post a 3:18.793 for the #7 Toyota, chopping almost a full second out of Bernhard’s best, and the first sub-nineteen time of the day. Meanwhile, Vitaly Petrov had made it a one-two for Manor in LMP2, almost exactly a tenth shy of his team-mate, and knocked the Alpines back to fourth and fifth in LMP2.

Matters were not looking so promising for the #37 Jackie Chan DC Oreca, back into the garage and with mechanics delving into the engine bay, while a yellow zone on the Mulsanne signalled problems for car #39, the Graff Racing Oreca-Gibson, with Eric Trouillet clattering the barriers at the exit of the second Mulsanne chicane.

The track went all-clear at ten to eleven, despite debris being reported on the turn into Tertre Rouge, but within moments a new yellow zone appeared at the Mulsanne Corner, where the #27 SMP Dallara was reported to be on fire following contact with the barrier. The flames were swiftly extinguished and the car unceremoniously hoisted clear of the gravel trap.

Just after the hour – forty minutes gone – and the #34 Tockwith Motorsports Ligier was reported to be running slowly along the Mulsanne; the best part of a full lap lying ahead of the experienced Karun Chandhok. He made it back. Meanwhile, reports of an oil-pump failure explained the absence of the #37 JCDC and threatened Alex Brundle and Tristan Gommendy’s participation as the session went green again; their co-driver David Cheng having completed three laps before the issue brought him back to the pitlane.

While these incidents added a little spice to the mix, there wasn’t much else to excite the spectators. The initial flurry over, there had been little change in either LMP1 or LMP2 by the time the first full hour of the session ticked by. In P1 it remained Toyota, Toyota, Porsche, Toyota, Porsche. With the shortened proceedings it was debatable whether further attempts at setting grid times would be pursued, with teams favouring the need to get all their drivers through minimum requirements, and comfortable familiar with car, track and conditions. This seemed especially true in the packed LMP2 category, where the order on the timing screens began to look fairly static.

The only significant advance was an improvement from Rubens Barrichello, moving into 9th quickest in LMP2 for Racing Team Nederland Dallara, handling issues perhaps not as big a handicap as the ex-F1 star had earlier predicted. He posted a 3:33.796, a tad overt three seconds shy of provisional pole.

Ten minutes into the second hour – forty short of the flag – and the #49 ARC Bratislava Ligier was off and gently nosing the barriers on the inside at Tertre Rouge; Konstantīns Calko  finding the limit of the classic and notably tricky right hander while managing to avoid serious contact. He tentatively returned to the circuit with assistance from the marshals. Having languished for some time in the lowly middle-order of the GTE field, the primrose yellow Ligier had been making better progress in the hands of the Latvian to stand 23rd overall, 17th in LMP2 and just behind Richard Bradley. The Briton had been setting modest improvements for the #40 Graff Oreca 07, but not sufficiently to better the car’s placing. 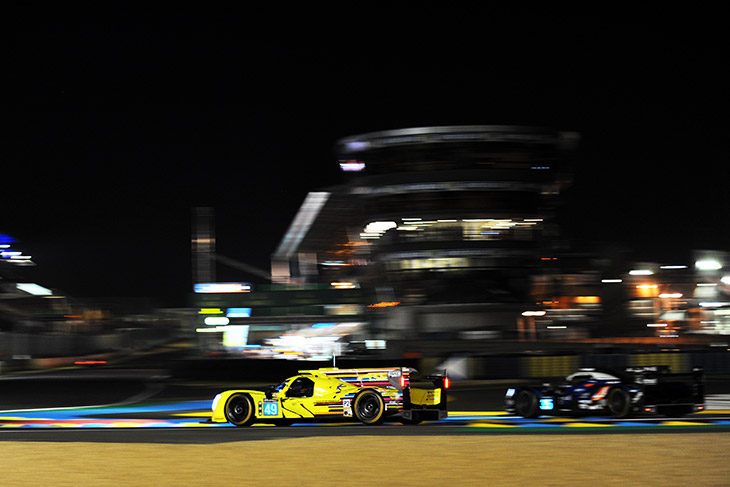 Half an hour to go, and just a single second covered the top six in LMP2, behind which times were a little more generously spread. Having been running strongly in the hands of Rubens Barrichello, the #29 Racing Team Nederland Dallara was not only slow out on track for Jan Lammers, early into its 18th lap, but the team manager was being summoned to the stewards.

After the best part of thirty minutes without change, LMP2 suddenly flared into life again with fifteen minutes to go. Vitaly Petrov was the first to pop his head above the parapet, needing only 95/1000ths to go quickest of the two Manors, stringing together quicker first and second sectors to set a 3:30.502 and move the #25 Oreca-07 onto top spot in class. It wasn’t to last long. A lap later, and Bruno Senna’s latest offering; a 3:29.851, was the first sub-twenty-nine for LMP2, but this was almost immediately eclipsed by the #28 TDS Racing Oreca – 3:29.333 the new marker set down by Matthieu Vaxiviere. The Frenchman appeared well satisfied as he was congratulated by his TDS Racing pit crew, the Oreca 07 Gibson parked for the night with a half second margin over the #31 Vaillante Rebellion. 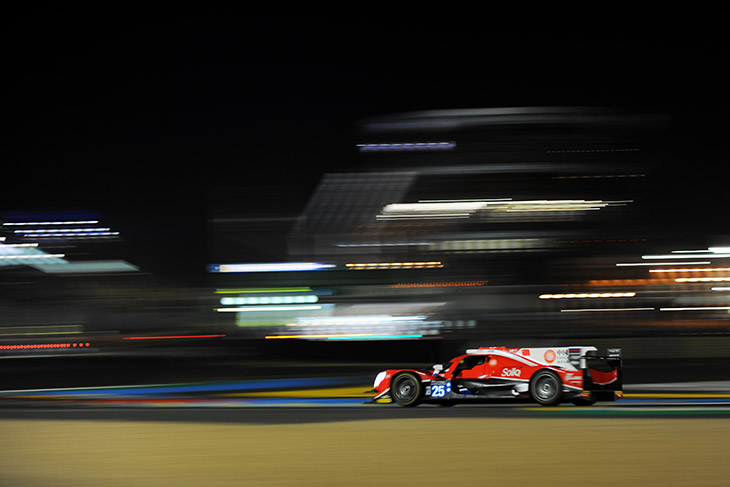 With just over 5 minutes yet to run, Sebastien Buemi climbed aboard the #8 TS050, perhaps in a late bid for provisional pole and Toyota bragging rights, but it wasn’t to be. His best wasn’t any better, and the #7 Toyota crew celebrated an evening’s work well done as the chequered flag signalled an end to the day’s proceedings.

With equally good weather forecast for tomorrow evening, every prospect exists for a more concerted shot at pole in the prototype classes, particularly in the premier class, the efforts of which seemed rather muted this evening. The top positions in the two prototype classes as we completed first qualifying were … 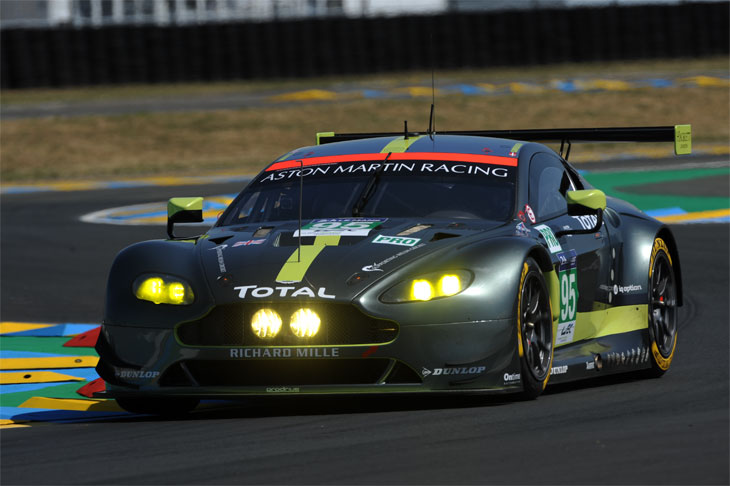 The #97 Aston shuffled the Porsche down a further place as the session proceeded, and that’s the order the session would finish in, as further improvements were temporarily prevented when slow zones were implemented to cover a stranded LMP2 car.

Lamy was again the reference in GTE Am, setting an early 3:55.2 to head the class from Cairoli in the #77 Dempsey Porsche and Euan Hankey in the #90 TF Sport Aston Martin.

DH Racing’s Krohn/Jonsson/Bertolini Ferrari was fourth-fastest in the Am class, ahead of the Larbre art car Corvette, the #61 Clearwater Ferrari and the #88 Proton Porsche.

Further slow zones around the hour-to-go mark kept chances for faster laps at bay for another while a fire for the SMP LMP2 entry was dealt with. More issues would affect LMP2 runners while the GTs escaped largely unscathed, save for an apparent stall in the pitlane for Le Mans rookie Tony Kanaan at the wheel of the #68 Ford. There was also a slow lap for Joey Hand in the sister #69 GT.

As the session entered its last 30 minutes, the focus seemed to shift to reeling off the mandatory five night laps per driver, with the odd quick sector but no apparent committed attempts to string together a fast lap. The one later improvement was the #67 Ford GT getting ahead of the #92 Porsche to sit provisionally fifth after the night’s running.