LMP
The #2 Porsche of Brendon Hartley, Timo Bernhard and Earl Bamber has triumphed at the 2017 Le Mans 24 Hours, emerging from a historic race that saw all the factory LMP1 cars hit trouble and an LMP2 entrant leading the race for the first time in the class’ history.

The last phase of this race regularly signals the potential for drama and tragedy, and the first recipient in 2017 was the #24 CEFC Manor TRS Racing Oreca as Jean-Eric Vergne, which ground to a halt in the pit lane. A trio of willing marshals leapt in, pushing the red prototype that had figured strongly earlier in the race towards its pit as the car’s crew sprinted to take over. It might have simply run out of fuel, but whatever the cause, the team had Vergne up and running again without much delay.

A few minutes afterwards, Timo Bernhard was completing a fuel-only stop, the German staying aboard to offer a safe pair of hands to the finish. The car resumed 46 seconds ahead of the #38 JCDC LMP2 Oreca, not that this posed any threat in real terms.

Next to enter pitlane was Piquet Jr in the #13 Rebellion from third in LMP2, rejoining 22 seconds ahead of the second string JCDC Oreca, Tristan Gommendy far from giving up yet.

Forty minutes left to run, and the drama continued. The second-placed #35 Signatech Alpine went straight-on at Arnage, the car ending up stranded in the gravel, wheels spinning fruitlessly. The marshals were swiftly to Negrao’s aid, and with a well-timed push, the wheels gripped once more, and the car skittered across to the access track before regaining the circuit. Negrao returned to the pits for assistance, but overshot the pit box and had to be hauled back quickly into the garage. The car would now almost certainly be off the podium, with Gommendy’s #37 Jackie Chan car now looking good for what would be an incredible team 1-3 for the Jota-run outfit. But surely the French driver would not be settling for that with Piquet’s Rebellion just 22 seconds in front? The fuse had been lit for an epic finish.

It certainly wasn’t all over, and Piquet Jr responded to Gommendy with a series of 3:34s that extended his advantage to over 30 seconds. There were several clean, unflustered final fuel stops in LMP2, but Negrao’s Alpine was still being worked on in its pit. Ho Pin Tung had a lead of two laps over Piquet Jr, who was comfortably ahead of Gommendy in third. Piquet’s late dash on low fuel had extended the gap to 37 seconds to the #37 Jackie Chan Oreca Gibson.

Half an hour to go, and Porsche #2 completed what would be its final pitstop, Timo Bernhard staying aboard for the honour of being a German driver taking the German entry to the line. Others were completing their own final fuel-stops, including most of the front-runners in LMP2, now equally front-running in the overall race. Whatever happened now, a new record would be set, with LMP2 cars second through to… well, potentially eighth. The previous best finish for an LMP2 entrant; 5th in 2016, 2014 and 2010, had been well bettered.

Despite only five minutes to go, Bernhard continued to push, and then the reason became clear. Heading down towards Indianapolis, the #2 Porsche caught, and lapped, the second-placed Jackie Chan Racing Oreca to give the 919 Hybrid a full lap advantage heading towards the final minutes. Elsewhere, things were going down to the wire, and a thrilling last-gasp battle was being played out for the win in GTE Pro between John Taylor in the #63 Corvette and Jonathan Adam in the #97 Aston Martin (see account below).

While all the excitement was panning out in GTE Pro, Timo Bernhard continued apace in the leading Porsche, the red, black and white 919 Hybrid hustling through the Ford Chicane for the last time and taking the chequered flag to an enormous cheer from the massed crowds. Just a handful of seconds behind, the second-placed #38 Jackie Chan Oreca paired up with its sister car, the #37, to take the flag together, side-by-side, a remarkable achievement for the squad, and for Sam Hignet’s crew at Jota.

Timo Bernhard completed the winding-down lap, shaking his head in stunned disbelief, tears welling in his eyes as the marshals moved out onto the trackside, waving their coloured flags in universal acknowledgement of a huge achievement. With his driver’s door raise skywards, his fist pumping the sky, Bernhard completed an emotional lap. His co-drivers, Brendon Hartley and Earl Bamber, made their way towards the podium to await Bernhard’s arrival with the Porsche that’s been such a significant part of their lives this past week. And with which they shall now always be associated.

Meanwhile, the astonishing last-lap battle for GTE Pro played out to the final moments, the win eventually falling to the #97 Aston Martin, the #63 Corvette sustaining front-left suspension damage after a hairy excursion across the gravel at the second Mulsanne Chicane. This not only allowed the Aston a relatively easy win, but also enabling  Harry Tincknell in the #67 Ford to come through and snatch second. The winning Aston, joined by the #95, crossed the line together.

As someone who has followed this race on monitor and timing screen for the full 24 hours (short of twenty minutes, when I briefly shut my eyes), I have to concede that this year’s Le Mans 24 Hours has been both physically exhausting and emotionally draining. The final laps of last year’s race still hold a poignancy that will live with me for the rest of my life, for the clarity of that last-lap disappointment, and the sight of Hugues de Chaunac as he watched in disbelief as victory was snatched from Toyota. This year, 12 months on, the cruel twists of fate struck Toyota again, not once, but twice, and then stabbed Porsche as well, for balance and good measure. It hasn’t been a truly great race, in the classic nip-and-tuck sense, and we’ve been largely deprived of the close on-track battles, certainly within the prototype classes, that make for the finest entertainment and thrilling spectacle, but it has still been extraordinary, and memorable, and wholly unpredictable.

The chequered flag signalled the end of a remarkable race. This time yesterday, who could have predicted the twists and turns of fate that were going to dog this 24 Hours. In the end, the slings and arrows of outrageous fortune smiled on Porsche, and history will record yet another Le Mans victory for the Stuttgart marque, Porsche’s 19th. The record books will also note the third consecutive win for the Porsche 919 Hybrid, as well as a first win for Brendon Hartley. It’s a second win for Bernhard (with one apiece driving for Audi and Porsche, which matches Dumas achievement) and also a second win for Earl Bamber. It’s the first time that two Kiwis have won at Le Mans since Chris Amon and Bruce McLaren in 1966 (Ford GT40). 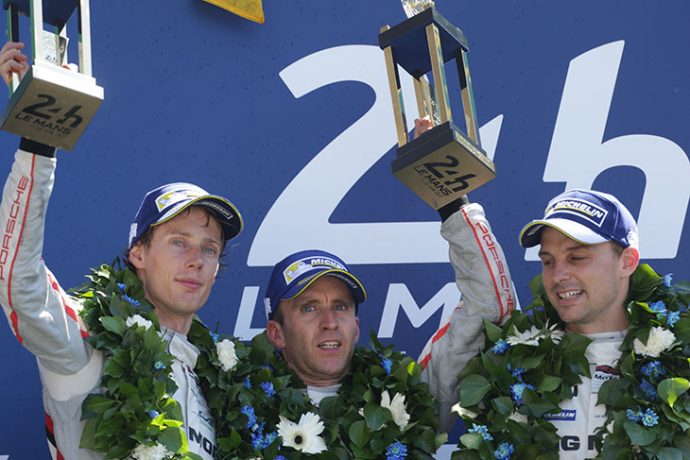 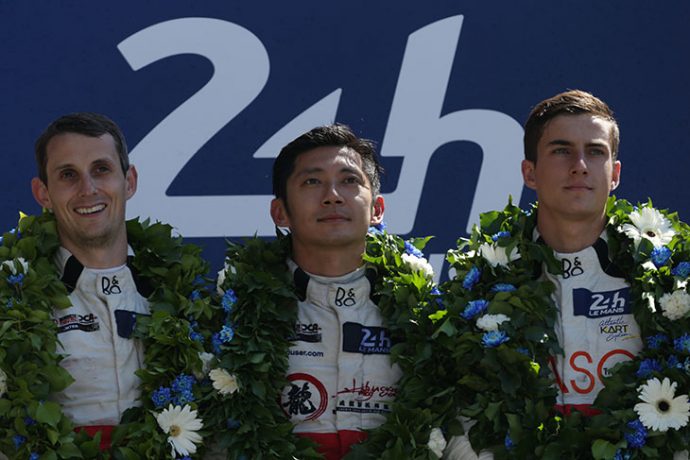 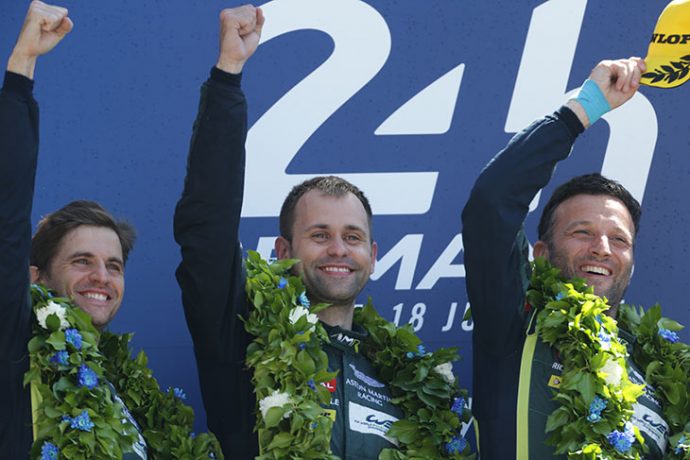 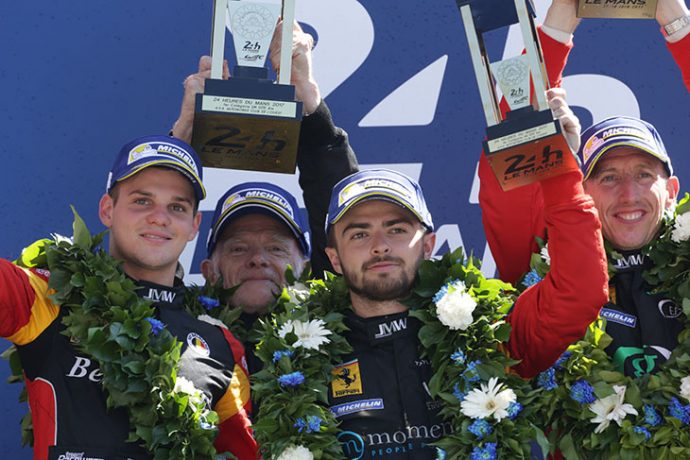 In GTE Pro, the win went the way of Jonny Adam, Daniel Serra and Darren Turner after an incredibly close battle that earlier saw cars from all of the class’ five manufacturers in with a realistic chance of victory and wasn’t resolved until the final few corners.

After hours of a repetitive pattern of lead changes, both the #63 Corvette and #97 Aston made splash-and-dash stops early in the final hour, leaving the result down to a straight duel between Jordan Taylor (who emerged from the stops ahead) and Johnny Adam for the last 45 minutes to the flag.

Having made two stops in quick succession towards the end of the penultimate hour, Fred Makowiecki in the #91 Porsche trailed by approximately a minute as the compressed final 45 minute stint began.

The Porsche made a stop with just 14 minutes to go, allowing Tincknell through at the last minute to grab a podium position for Ford, initially looking like third, but then the final two laps happened.

Then, some hairy moments in traffic left Taylor looking vulnerable to losing the lead and Adam finally made a lunge into Arnage with five minutes to go. The cars dramatically banged wheels on the way out of the corner, but Adam had lost momentum for the straight down to the Porsche Curves and it seemed like he wouldn’t be able to renew the attack before the flag.

But there was a heart-in-mouth moment for Taylor on the penultimate run down the Mulsanne when he straight-lined the chicane, and yet more drama was to come: Taylor ran wide on the exit of the Porsche Curves and lost the lead to Adam as they powered on to the start-finish straight for the second to last time.

Somewhere in the melee, Taylor picked up a puncture and slowed on the final trip through the Esses, eventually managing to complete the lap but losing out to Tincknell’s Ford for second at the flag.

In GTE Am, the result hadn’t been in doubt for a long time, with Dries Vanthoor, Will Stevens and Rob Smith being the absolute class of the field for the majority of the race in the #84 JMW Ferrari.