F4 racer Billy Monger, who has just joined the Frederic Sausset Academy with the intention of racing at Le Mans in 2020 after his life-changing accident at Donington Park earlier this year, believes that his dream of being a professional racing driver is far from over.

Monger, who had both his legs amputated below the knee after the impact, is already planning his route back to racing. Since leaving hospital, he has been training, joined the Academy, has used the Carlin simulator to try out hand controls, and even driven around a field near his parents’ house.

Frederic Sausset’s academy he says, has given him hope and motivation to get back behind the wheel as soon as possible.

“Fred’s Academy, at the moment is a three-year plan to get a team of drivers to race at Le Mans in 2020,” Monger said. “That’s the end of the first project. Obviously he wants it to be sustainable though, a long term project that carries on into the future.

“It’s a great idea to get disabled drivers and disabled people to the top of motorsport. If they can do it in the Olympics, then doing it in motorsport would be great. Fred has got a real aim to meet that.”

Later this year, Monger will race with Sausset at Estoril in the converted Ligier JS53 Evo 2 CN prototype; it will mark his first race since his F4 crash in April. First the team will go testing in late September, early October. The car will be adapted to Billy’s legs, using the same principles of controlling the car as Sausset.

“The first race as a team is at Estoril at the end of the year in VdeV, with Fred and Christophe (Tinseau) as teammates.” he said. “I’m looking forward to it and hopefully I’ll be ready and fully fit. It’s going to be a tough few weeks of training and adapting to the systems that they use. But I think I can do it.

“I’ve driven a car around a field at our house, but nothing on a track since. That will be the next step, to get me back on track, behind the wheel and see where I need to improve. At the minute I haven’t had much experience in a car, but I plan to get a lot of experience in before we race so we’re at the sharp end of the grid.

“There’s no timeframe set at the minute, but as soon as I think I’m ready, I’m getting in the car, and getting to work.”

Billy’s time in a simulator though, has given him renewed confidence that he can race as soon as the VdeV at Estoril. It will take a while to get used to different controls, but being capable of setting times similar to those with standard machinery is possible.

“I drove a single-seater in the Carlin sim, it was an F3-spec car. It took a while to get used to it. But I kept improving and I got within three seconds of their F3 drivers on the same track, so for my first time it was a good effort.

“It was amazing, was good to be behind the wheel. You don’t get the same adrenalin rush as you do when you’re on the track competing in front of crowds. But it was good to feel independent and able to do stuff for myself again. That’s a big part of it.

“Frederic showed last year at Le Mans that it’s possible. He raised the bar with disabled drivers. We plan to keep on raising the bar and getting more competitive so that we’re not a side show, so that we’re the main event that attracts good people and good sponsors.” 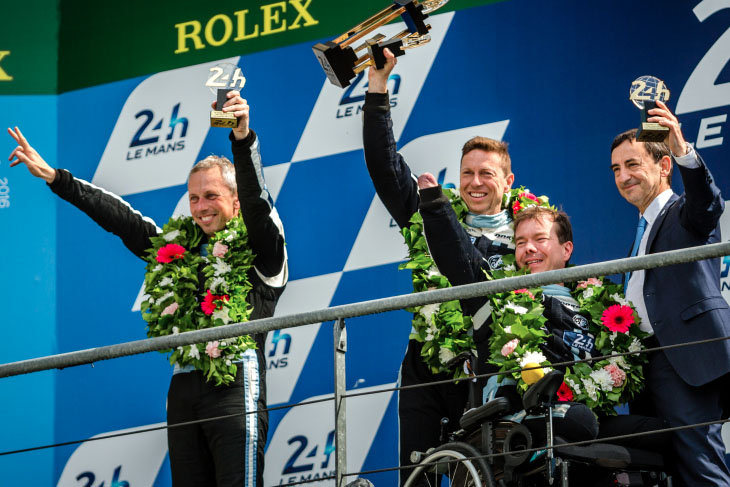 In order to prepare, Monger has had to concentrate on training, and push back his school exams, to ensure he’s ready to race later this year.

“I attend physio sessions three times a week in England to build up my leg and core strength,” he explained. “And then with my friends I trained with before the accident, I train at my local gym again now. For me its business as usual, I need to be as prepared as I can be. I enjoy it, it makes you realise how much effort can bring you good results.

“The support has been unbelievable. I have to say thank you to everyone who donated, and even the people who just gave me good wishes. All of that meant a lot to me, it showed me how the motorsport community gets together when something bad happens. It’s positive, not just for me, but for everyone in motorsport, to know that the support is out there.

“When I started my recovery I had a lot of pain, but with the tablets I’m on it’s going away. Whether it goes away fully I don’t know.