Acura Motorsports have finally confirmed the news that it will join forces with Team Penske to field a DPi prototype effort in the 2018 IMSA WeatherTech SportsCar Championship.

The official competition debut will take place at the season-opening Rolex 24 in January, 2018, with a formal unveiling of the ARX-05 slated for Monterey Car Week in August. The driver lineup will be announced at a future date.

There is no decision on whether the team will debut with a ‘spec’ LMP2 car at Petit Le Mans, Team Penske’s Tim Cindric saying that this was an idea that has been “put on the side,” and is “a long way from being confirmed.”

“Roger Penske is already an important part of the Acura family as one of our great Acura dealers, and now it is a thrill to have him as part of the Acura Motorsports family as well,” said Jon Ikeda, Acura vice president and general manager. “We look forward to building on the success of the race-winning NSX GT3 program, and couldn’t be more thrilled to return to the prototype category of the WeatherTech SportsCar Championship with a partner like Team Penske.”

“We are excited to join forces with the Honda Performance Development family and represent the Acura brand with two prototypes starting in 2018,” said Team Penske Founder Roger Penske. “Sports car racing has been an integral part of Team Penske’s heritage, from our first race at the 24 Hours of Daytona in 1966 to running the American Le Mans Series in the late 2000s (pictured below at Sebring in 2008 with the Porsche RS Spyder). 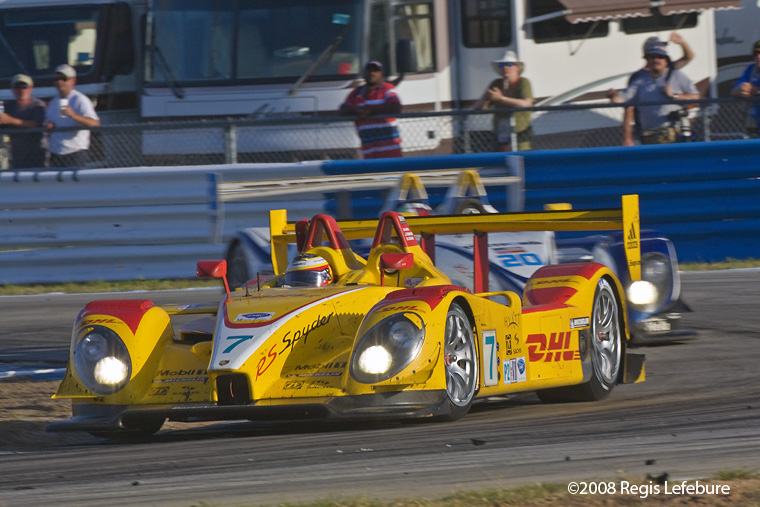 “Reviving a Team Penske sports car program has always been a goal for us, but to do so required strong and successful partners like Honda and Acura. It’s great to extend our relationship from the dealership to the race track and we are excited to come back to IMSA and the WeatherTech SportsCar Championship.”

The Acura ARX-05 [Acura Racing eXperimental, generation 5] is the latest in a line of endurance prototypes to be fielded by the company dating back to 1991, just five years after the 1986 launch of the Acura brand. Based on the very successful ORECA 07 chassis, the new ARX-05 prototype features Acura-specific bodywork and utilizes the race-proven, production-based Acura AR35TT twin-turbocharged 3.5-liter V6 engine.

The multi-year program will be administered by Honda Performance Development, the racing arm for both Acura Motorsports and Honda Racing in North America.

“We had a very spirited competition with Team Penske during our previous ALMS Acura prototype programs, and we are looking forward to working with, instead of against, Team Penske as the ideal partner for our return to the prototype ranks,” said Art St. Cyr, HPD president. “We also had a great deal of success together in CART and IndyCar competition, and Team Penske’s overall record in all forms of racing is unrivaled in our sport.”

Based on the “J35” family of engines found in Acura RDX, MDX, RLX and TLX production vehicles, the Acura AR35TT engine to be used in the ARX-05 was initially adapted for racing in a joint effort between HPD and Honda R&D Americas. Used in a variety of prototype chassis, the engine has powered class winners at the 12 Hours of Sebring (2011-13); the 24 Hours of Le Mans and LMP2 World Endurance Championship (2012); the American Le Mans Series LMP2 titles (2012-13); and the overall winners at the Rolex 24, 12 Hours of Sebring and Petit Le Mans in 2016.

HPD, Acura and Honda have a history of success in endurance sports car racing, with more than 100 prototype victories since 1991, including either class or overall victories at the Rolex 24, 12 Hours of Sebring, 24 Hours of Le Mans and Petit Le Mans. Acura and HPD swept all prototype championships in the 2009 American Le Mans Series; and won the North American Endurance Championship manufacturers’ title in 2016. Prior to the founding of HPD in 1993, Acura won 25 races and three consecutive IMSA Camel Lights Championships from 1991-93

HPD’s Acura and Honda engines have recorded 78 race wins at endurance sports car races around the world, with 70 of those victories coming in the HPD-developed line of sports prototype cars.