After their big win in the 6 Hours of Nürburgring, Brendon Hartley, Earl Bamber and Timo Bernhard have opened up a 30-point lead in the FIA World Endurance Drivers’ Championship, with five races remaining.

The trio, which took 50 points for its Le Mans win, and 25 for the win on Porsche’s home turf, leads the #8 Toyota crew of Anthony Davidson, Kazuki Nakajima and Sebastien Buemi, who have 78 points, to the leaders’ 108. The fourth place finish after the car’s fuel pump problem proved costly to the title challengers.

Even with a second place finish at the ‘Ring, Andre Lotterer, Neel Jani and Nick Tandy in the #1 Porsche still sit behind the #38 Jackie Chan DC Racing drivers, who finished second and Le Mans. Ho Pin Tung, Oliver Jarvis and Thomas Laurent have 60 points, while the Porsche trio have 46.

The win in Germany also sees Brendon Hartley and Timo Bernhard equal the record 10 overall wins in the FIA WEC achieved by Benoit Treluyer, Andre Lotterer and Marcel Fassler. Remarkably all ten of those wins for the Porsche pair have come after the last win (Spa 2015) for the Audi trio!

Earl Bamber meanwhile gts his first 6 Hour FIA WEC win to add to the pair of wins in the Le Mans 24 Hours. The win also sees Porsche claim their 30th overall or class win in the FIA WEC.

Three wins out of four races so far this season, has left Jarvis, Tung and Laurent as clear favourites in the LMP2 title race. As it stands they have a 46-point advantage, making them almost two wins clear of the competition. 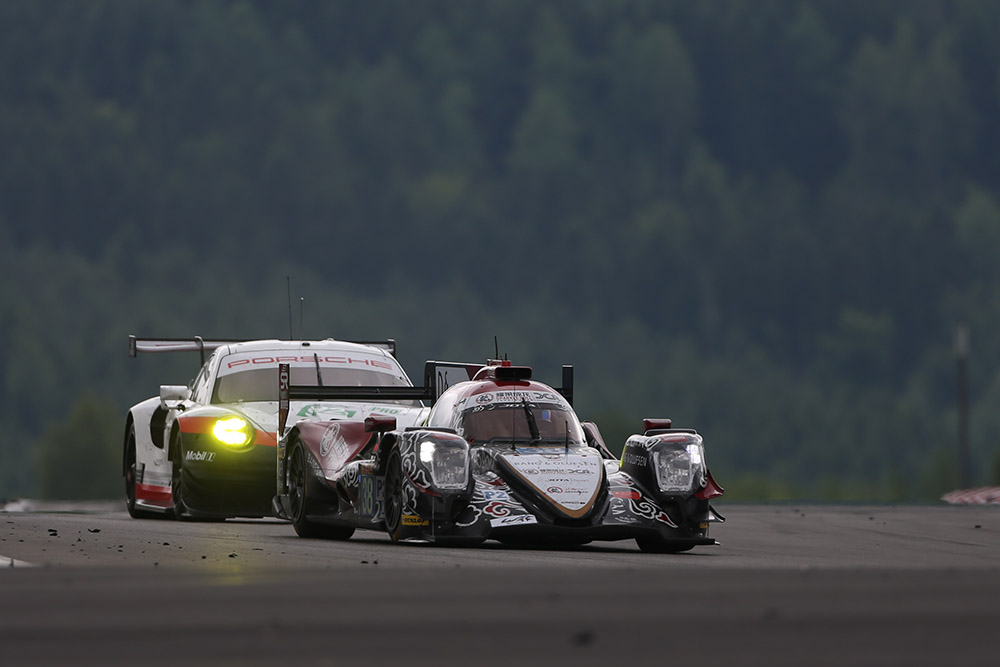 Their remarkable performances this season has left the only real challenger, the #31 full-season duo of Bruno Senna and Julien Canal. The pair – with stand-in Filipe Albuquerque – took their third second place finish on the weekend, the others being at Silverstone and Spa.

Tight at the top in Pro

With the Le Mans-winning #97 Aston Martin and title leading #67 Ford finishing off the podium, the gap has closed, with just 20 points separating the top five teams in the FIA Endurance Trophy For LMGTE Pro Teams. 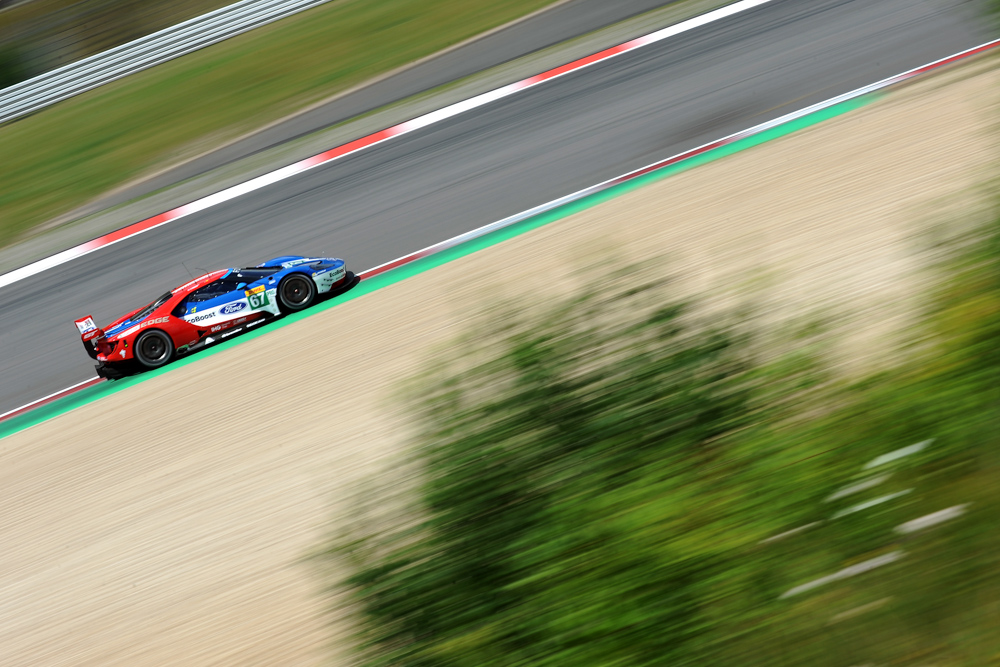 The #67 Ford Uk GT still leads the way, but with 84 points, is just 11 ahead of the #51 AF Corse Ferrari which finished first at the Nürburgring and the #91 Porsche which is now level after a second in Germany, but classed as third due to the #51 having a win on its resume.

The #97 Aston Martin is fourth, four points back with 69, ahead of the #71 AF Corse Ferrari that finished last at the Nürburgring with gear shifter problems and is on 64,

It’s slightly more complex in the Drivers’ title race, which has been affected by the inclusion of GTE Am drivers (eligible for the championship) scoring highly at Le Mans.

Andy Priaulx and Harry Tincknell are on 84 points at the top, with Pipo Derani alone in second (though he will slip down the order now his Ford deal is over).

The nearest challengers to the Britains in the #67 Ford GT is the #91 Porsche pair of Fred Makowiecki and Richard Lietz that are a point off Derani and 11 points of the leaders.

Fourth – but actually third because of the stray Brazilian – are AMR’s leading combination, Darren Turner, Jonathan Adam and Daniel Serra. Finishing off the podium at the ‘Ring has seen them slip to 15 points behind, after being just 11 points off after Le Mans.

The closest battle in the GTE ranks though, is in the GT FIA World Endurance Manufacturers Championship. The strong run from Ferrari in the Eifel Forest has seen them move level with Ford on 135 for the lead. Aston Martin have 113 in third, with Porsche on 106 in fourth.

Dempsey Proton emerges in Am

A big win on home soil for German team Dempsey Proton Racing was well deserved, and has placed them in the GTE Am title race which now has three protagonists. 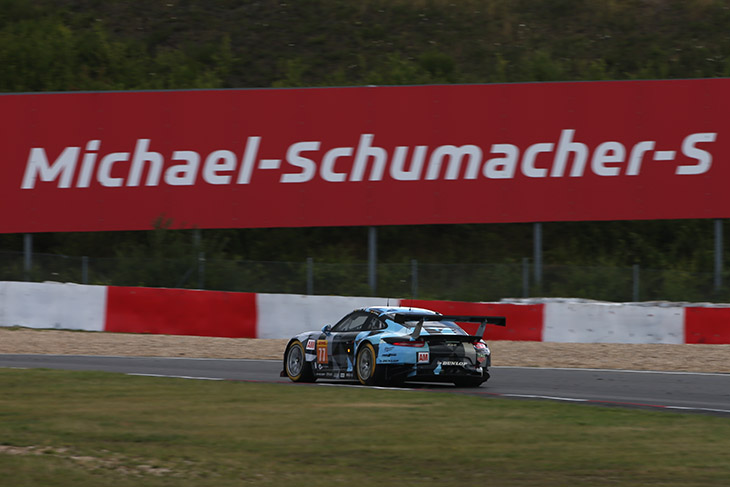 Clearwater Racing, after its 25 points from Silverstone and 50 at Le Mans, is still on top with 102. But the Dempsey team has now closed the gap in the Teams’ Championship to eight points, now on 94 after Clearwater finished fourth last time out.

Third is now the #98 Aston Martin Racing team, which would still sit second had it not lost second place to Spirit of Race in the final hour at the Nürburgring.

Meanwhile, in the Endurance Trophy For GT AM Drivers, it’s all change. Christian Ried, Marvin Dienst and Matteo Cairoli have moved into the lead, with 88 points after their win, though they are level with Clearwater’s trio, which dropped points at Le Mans by finishing behind guest entered GTE AM drivers.

It was a maiden WEC win for Dienst and Cairoli, and a fourth for Ried grabbed; but the first since a three-win streak in the WEC back in 2012.

Paul Dalla Lana, Mathias Lauda and Pedro Lamy are third, but only by two points, which could easily be made up by a strong result at the next race.

The Drivers title in Am could well be the one to watch to the end, the racing has been top draw this season, and with the top three on such an even keel, it’s left us with a points battle that has the potential to go down to the wire.