Colin Noble topped the timing screens in the first Free Practice session of the Michelin Le Mans Cup’s trip to the Red Bull Ring, the Nielsen Racing driver setting a 1:27.201 at the very end of the running, improving on his previous best, a 1:27.341.

His time in the #79 Ligier JS P3 was almost eight tenths clear of the other runners. Second in the order was the #14 RLR Msport Ligier JS P3, which also had its best time set at the flag. Alex Kapadia ran fastest in the car, his best a 1:27.779 before getting called to Race Control for passing the start line more than once after the end of FP1.

The #9 Duqueine Engineering Ligier of Joel Janco also passed the start line more than once after the session, noted by Race Control.

Rounding out the top three was the #4 Cool Racing by GPC Ligier, Iradj Alexander setting the time, a 1:27.871.

The first of the Norma teams ended up fifth, behind the Spirit of Race Ligier in fourth. DKR Engineering’s M30 set a 1:27.978 courtesy of Jean Glorieux, just under a second off Noble’s time.

Despite the thunderstorms and torrential rain late last night in the local area, the circuit was dry by the time the session began. But not all the LMP3 cars had a clean run, despite the ideal conditions. The session was red flagged for the #12 SVC Sport Management Ligier stopping on the outside of Turn 1 with just over half an hour left to run. Marco Cencetti was in the car, and climbed out before it was recovered and the session resumed.

In GT3, Spirit Of Race’s Ferrari 458 set the quickest tour of the Red Bull Ring, with Maurizio Mediani completing a 1:30.200. It also put the Swiss-flagged team’s car 15th overall. 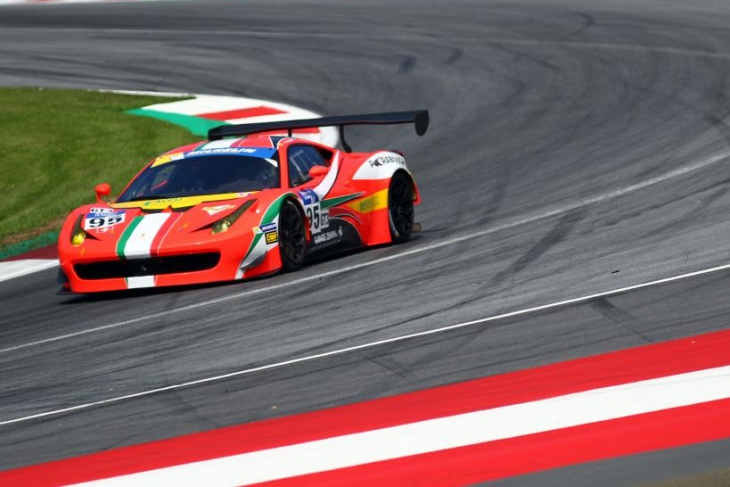 Two spots back in the overall order was the EBIMOTORS Lamborghini Huracan GT3 of Fabio Babini and Emanuelli Busnelli, which ended the morning with a 1:30.419. Babini set the team’s fastest time.

The Optimum Motorsport Audi R8 slotted in third, after a 1:30.506 from Joe Osborne, beating out the best time from Tom Onslow-Cole who in the Ram Racing Mercedes dropped to fourth.

Free Practice 2 at the Red Bull Ring for the Michelin Le Mans Cup runners is set to begin at 14:05 local time.