For the second straight round, and for the third time in 2017, a Honda NSX-GT will start from Pole Position. Tomoki Nojiri and Takashi Kobayashi who helped drive the #8 ARTA NSX-GT to its second Pole of 2017 for tomorrow’s race at Sportsland SUGO.

The ARTA crew led an all-Honda lockout of the front row, which they’ll share with the #100 Raybrig NSX-GT of Naoki Yamamoto & Takuya Izawa – who scored Honda’s last GT500 victory at this track in September 2015, nearly 22 months ago.

With the #17 Keihin NSX-GT (Koudai Tsukakoshi/Takashi Kogure) third, and the #16 Motul Mugen NSX-GT (Hideki Mutoh/Daisuke Nakajima) fifth, the NSX fleet locks out the top three, and four of the top five places on the grid for Sunday’s race – giving Honda its best shot at snapping its long winless drought in Super GT’s premier category.

“I’m relieved to have gotten pole position,” said ARTA driver Nojiri. “We had been in good condition from the official tests and our sponsors had been looking forward to a good performance from us, but I had been feeing a bit of unexpected pressure as a result.”

“In the end, although this is still just the qualifying, it is the job of the drivers to turn those expectations into solid results. I was confident that I had the concentration necessary to put in one very fast lap, but must admit honestly that I am still relieved that I was actually able to get pole position.”

This is Nojiri’s first career Super GT Pole Position credited to him as a driver. Kobayashi, who ran the ARTA NSX-GT in Q1, won Pole for ARTA in the season opener at Okayama.

Best of the Lexus LC500s in Qualifying was the #19 WedsSport Advan LC500 (Yuhi Sekiguchi/Yuji Kunimoto) in fourth, with the #1 Denso Kobelco SARD LC500 (Heikki Kovalainen/Kohei Hirate) recovering from a practice shunt to qualify seventh, next to the fastest car from Saturday Free Practice, the #6 Wako’s LC500 (Kazuya Oshima/Andrea Caldarelli) in eighth.

It was a frustrating day for Nissan – despite rolling out its first engine update of 2017, only the #24 Forum Engineering Advan GT-R (Daiki Sasaki/João Paulo de Oliveira) advanced into Q2, ultimately qualifying in sixth. 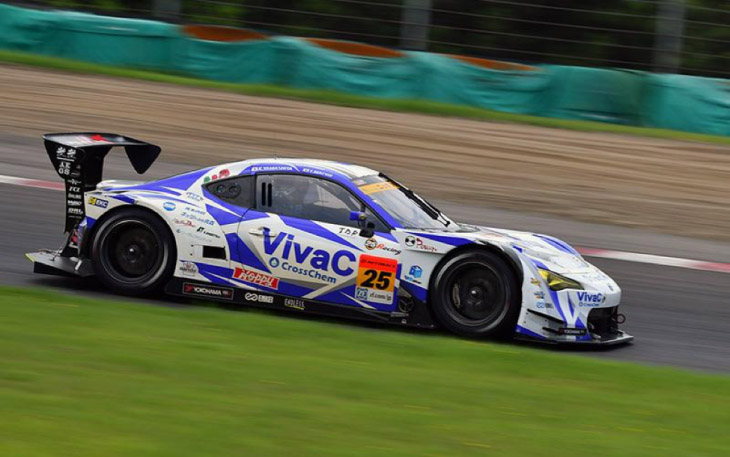 Despite carrying a field-high 58 kilos of Success Ballast, Toyota young driver Kenta Yamashita was easily able to get the car through Q1, and Matsui was able to belt out a massive lap when it counted in Q2 – giving the defending GT300 champions and current championship leaders pole position for the second time in 2017.

“I am very happy to have gotten pole position,” says Matsui, credited with his fourth career pole. “The car had been set up perfectly for Q2, and that was thanks to the advice given by Yamashita-san after running in Q1.”

“Watching him driving on the monitor, it looked as if he had been struggling somewhat with an under-steering tendency, but thanks to the advice he gave after his session, our mechanic Takeshi (Tsuchiya) had been able to adjust the settings well so I was able to get pole position. I am very grateful to the two of them and to the whole team for the great job they have done.”

After securing the 43rd and final entry for the race last month, the #60 Syntium LM Corsa Lexus RC F GT3 (Akira Iida/Hiroki Yoshimoto) had a terrific opening day – fastest in practice, and third on the GT300 grid (and best of the FIA GT3 cars) for Sunday’s race thanks in large part to some fast laps from Yoshimoto.

The best of the foreign-make cars was the #4 Goodsmile Hatsune Miku Mercedes-AMG GT3 (Nobuteru Taniguchi/Tatsuya Kataoka).

The tricky SP corners in Sector 3 proved troublesome for a number of drivers, including Manabu Orido (#88 ManePa Lamborghini Huracán GT3) who crashed in Q2 and brought out one of two red flags in time trials, and Kiyoto Fujinami (#5 Mach Syaken MC86 GTNET) whose car didn’t even make a qualifying run after a crash in practice earlier in the day.

Light rain is expected for Sunday afternoon’s 81-lap race, which almost certainly has the potential to shake up the running order at this tricky, undulating 3.7 kilometer bullring.

Images courtesy of ARTA Project and the GT Association.