Any fan of motor racing can appreciate a good underdog story. A story about a driver who came from the most unlikely of backgrounds to succeed in one of the most ruthless sports in the world.

There are many drivers like this competing in this weekend’s 24 Hours of Spa Francorchamps, who have overcome setbacks and hardships of their own to race at the highest levels of this sport. But very few of them, if any, have had a career path quite like Nobuteru Taniguchi, the lead driver for Goodsmile Racing with Team UKYO, a driver and team both making their European GT racing debut this weekend at Spa.

Sure, Kamui Kobayashi, of ex-Formula 1 and current WEC fame, is the team’s big star for this weekend’s race, but it’s Taniguchi who’s been the heart and soul of Goodsmile Racing for seven years and counting.

He’s a driver who embodies all of what draws people to Japan’s motorsport culture as a whole, and a driver who also embodies the hard-working, intrepid spirit of an age of racing drivers long since passed.

Getting his start not in karting or single-seaters, but as a high-school graduate with a souped up Toyota Sprinter Trueno, Nobuteru Taniguchi applied his craft on the public mountain roads in the dark of night, drifting his AE86 hatchback through the perilous passes. Yes, one of Japan’s most accomplished sports car racers of the 21st century began his career as a street racer.

And those midnight drift runs were how he applied his craft in between amateur drifting competitions at the tiny, grassroots circuits of Japan. In 1996, Taniguchi entered a competition sponsored by Video Option car magazine, and his career quickly took flight. With a handful of podium finishes, including third place at the national competition, Taniguchi was now established as part of a new generation of young drift drivers who sought to take the sport professionally.

He did just that, by winning the inaugural D1 Grand Prix Series in 2001, driving his now-legendary HKS Nissan Silvia S15 to the title in Japan’s first professional drifting championship.

It’s a story that seems like it was ripped right out of the plot of an Initial D comic or a Fast & Furious film, that a young kid just hooning around on public streets with a few dollars to his name and a lofty dream could one day ascend to the pinnacle of the sport as an accomplished, championship-winning, legitimate racing driver. 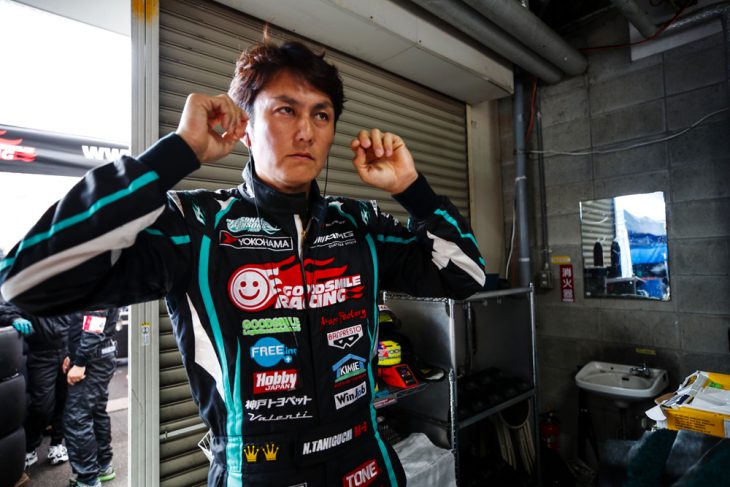 It didn’t come without hard work, however: In his late-20s, Taniguchi would work a number of odd jobs in and around the automotive industry to support his fledgeling racing career – ranging from a garage hand at his friend’s body shop in Yokohama, to a freelance automotive journalist in Tokyo, all in the pursuit of one day becoming a professional driver. In 2001, at the age of 30, Taniguchi finally turned pro as a drift driver, and as a circuit racer.

In 2002, Taniguchi signed his first contract to race in the All-Japan GT Championship (JGTC), and in just his fourth career race driving the famous RE Amemiya Mazda RX-7, he won his first race at Sepang International Circuit, and over the next decade, he’d go on to become one of the series’ biggest stars, even as a competitor in the second-tier GT300 class.

His unique background in drifting made him a maven in driving at the limit on even the most ragged and worn sets of tyres. He could drive any car he raced, and he could drive it very, very well. Even back in his earliest years as a driver, Taniguchi had a serious inclination to the technical side to the sport.

In contrast to his rugged, rebellious origins in racing, Taniguchi is a stoic character, with a dry sense of humour, a love of dogs and playing golf, and on the track, he possesses an uncompromising will to win every single race he contests, and commands the respect of his fellow racers in the paddock. His determination is reflected in his nickname, “NOB” short for, “No One Better”.

In 2011, Taniguchi, in his tenth season in what was now known as Super GT, signed a deal to race with Goodsmile Racing with Team UKYO, a relatively new team with very few results to their name in their first three seasons, seen as little more than a novelty act.

But with the addition of a championship-winning BMW Z4 GT3, former driver Ukyo Katayama as a team principal, and a new ace driver in Taniguchi, the team quickly found legitimacy, and  established themselves as genuine contenders, winning the GT300 championship in their first season together and ending Taniguchi’s ten-year wait to win his first Super GT drivers’ title.

Even the typically stone-faced Taniguchi couldn’t fight off the tears on the podium after finally capturing his elusive first crown after years of coming close with some of the most established teams in the category.

He’d go on to win a second championship in 2014, now paired with his current co-driver Tatsuya Kataoka, and in 2017, after winning the season opener at Okayama International Circuit, his seventeenth career victory, good enough for 2nd all-time in GT300 history, Taniguchi is in hot pursuit of his third GT300 Drivers’ Championship with Goodsmile Racing and their Mercedes-AMG GT3. 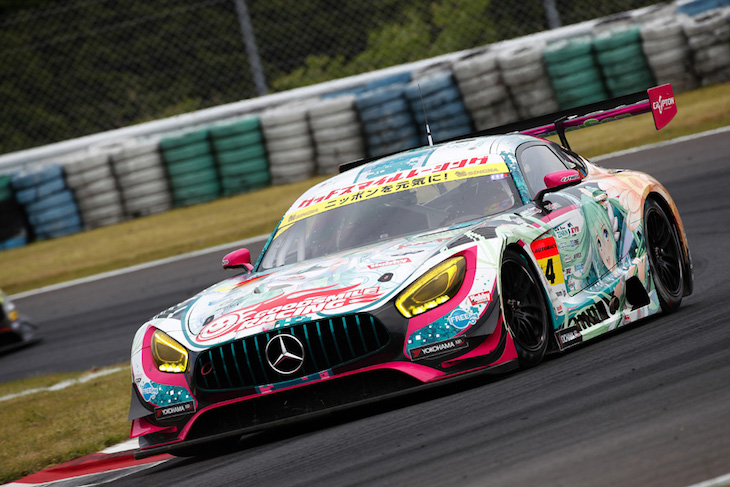 And even at age 46, and in a field filled with younger, and equally determined drivers, Taniguchi is still one of GT300’s fastest hands.

But the successes in drifting and in Super GT are just the crown on a star-studded racing career for Taniguchi that also includes eight championships in the Super Taikyu Endurance Series, including a run of six top-class titles in a row with the Petronas Syntium Team from 2008 to 2013. He’s won the 24 Hours of Tokachi, the 12 Hours of Sepang, the Fuji GT 500km Race, and he’s even cameoed in the FIA World Touring Car Championship and the Continental Tyre Sports Car Challenge.

He’s also come to fame through his work as a co-presenter of video car magazines such as Best MOTORing and Hot Version, testing out the latest production and tuned performance cars with the legendary “Drift King” Keiichi Tsuchiya – who himself was an accomplished circuit racer, and runner-up at the 24 Hours of Le Mans in 1999 with Toyota – as well as fellow Super GT competitor and champion, Manabu Orido. 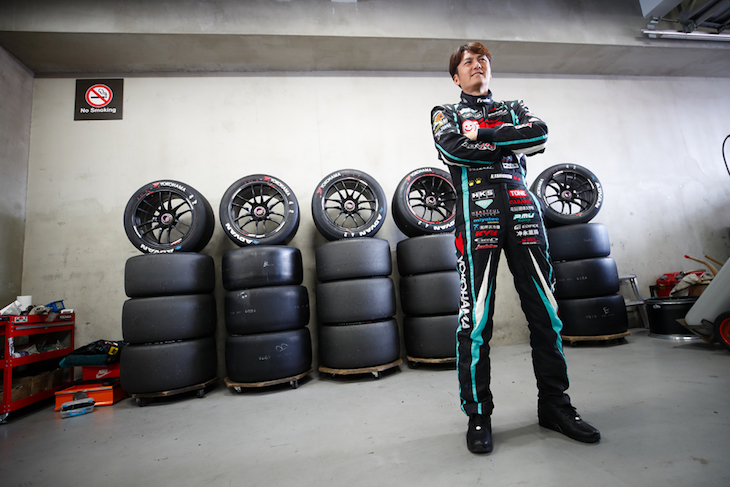 A testament to Taniguchi’s popularity in his native Japan came in a fan poll conducted in 2016, when Taniguchi was voted the third-most popular Super GT driver out of the entire combined pool of GT500 and GT300 drivers. Only Nissan factory GT500 drivers Satoshi Motoyama and Tsugio Matsuda ranked higher, and Taniguchi was by far the most popular from GT300. 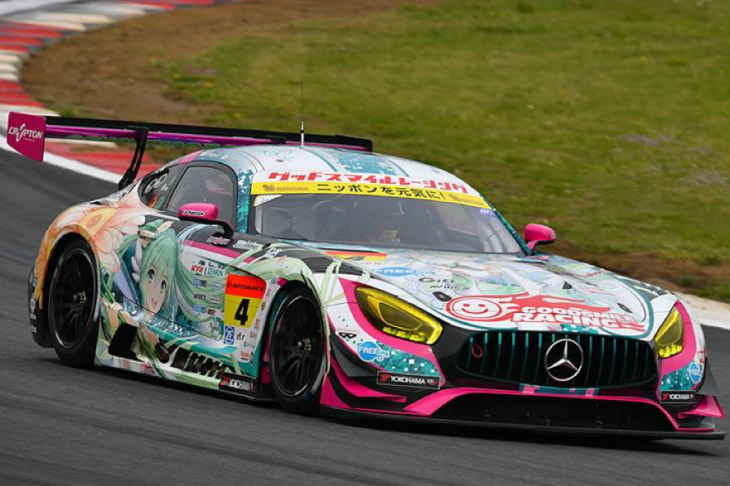 Over twenty-five years after Taniguchi’s racing journey began in the unlikely birthplace of the mountain passes of Japan, the veteran driver finds himself at the crossroads yet again at the eve of his Blancpain GT Series debut on another stretch of revered mountain roads in Belgium, thousands of kilometers away from home..

Taniguchi is the seldom-known underdog in a field of ex-Formula 1 stars, Le Mans champions, and many more of the world’s biggest and most established stars of endurance racing as they tackle one of the sport’s most demanding events.

But after a quarter-century of scratching, clawing, surviving and sacrificing to make his name as one of the greatest drivers of his generation in two different forms of motorsport, it’s exactly the position where he wants to be in, as he seeks to live up to his moniker and prove that there truly is No One Better than Nobuteru Taniguchi.