Markus Winkelhock, Jules Gounon and Christopher Haase in the #25 Sainteloc Audi (above) have won the 2017 Spa 24 Hours, which came down to a thrilling three-way battle in the final hour. Second went to Maxime Soulet, Andy Soucek and Vincent Abril in a rather battered and bruised #8 M-Sport Bentley (below). Raffaele Marciello, Michael Meadows and Edoardo Mortara in the #90 AKKA-ASP Mercedes (below) wound up third a after a number of contenders, including the polesitting Kaspersky Ferrari, fell by the wayside earlier in the running. 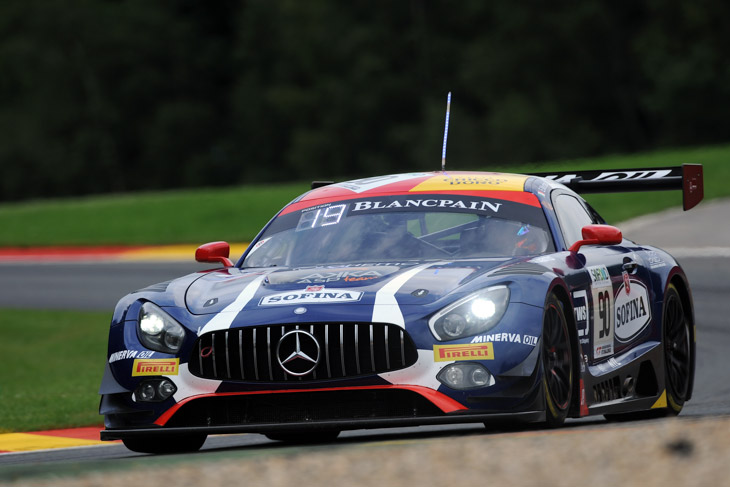 Marciello delivered a remarkable ‘Ironman’ performance, at the wheel of the AMG GT for almost the maximum 14 hours permitted for a single driver, but did blot his copybook by being involved in two on-track incidents, one that led to the aforementioned Ferrari’s race-ending crash and another much later in the race that saw him pirouetting 360 degrees through Eau Rouge.

The winning margin of the Audi over the Bentley was 11.8 seconds, although a total of 13 safety-car periods ensured the field was regularly bunched up at various times during the race. There were 58 lead changes and 14 different cars held the top spot over the 24 hours. In the end, 33 of the 63 starters made it to the chequered flag at 4:30pm on Sunday – a significantly higher rate of attrition than last year’s 54 finishers from 65 starters. 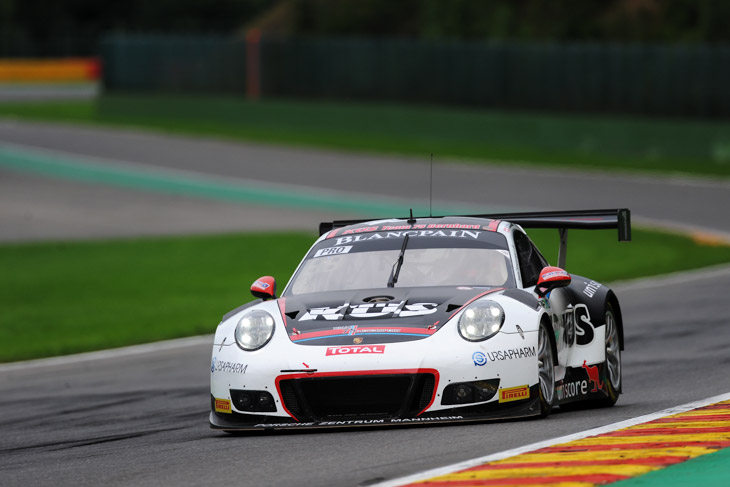 Just missing out on the podium, Porsche LMP1 driver Timo Bernhard’s Team75 Kus had a superb 24-hour race debut, coming home fourth with its all-works-driver line-up of Laurens Vanthoor, Kevin Estre and Michael Christensen. A three-minute stop-go penalty for causing a collision seemed to scupper the car’s chances in the early stages, but the three drivers fought back to get among the leading group on Sunday morning and afternoon. 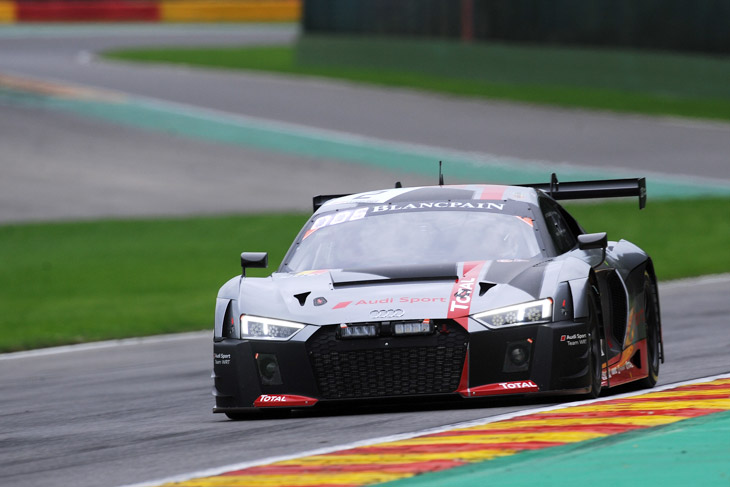 WRT Audis finished fifth and sixth, the #2 Vervisch/Mies/de Phillippi car (above) edging out the #1 Rast/Mueller/Garcia entry. Well timed ‘technical pitstops’ conducted during a period of rain and local yellows on track hauled them into contention in the early hours of the morning, although both spent longer than expected at a couple of pitstops and didn’t produce to consistent pace needed to stay on terms with the leader. Seventh and eighth were two more Mercedes: the #85 HTP and #4 Black Falcon cars. But it was the #84 HTP Motorsport entry that had initially led the Mercedes charge, until Jimmy Eriksson had a heavy crash going at Eau Rouge, ending the car’s race on the spot. And the #88 AKKA ASP of Serralles/Juncadella/Vautier, also ran well until a coming-together with a backmarker left it buried in the barriers on the approach to Blanchimont.

The one-off Mercedes entry from Japanese former F1 driver Ukyo Katayama’s Goodsmile Racing team, with Kamui Kobayashi and Super GT drivers Nobuteru Taniguchi and Tatsuya Kataoka at the wheel, suffered a cruel week. The Ram Racing-supported effort first had to prepare a new chassis after Kobayashi crashed in Thursday’s qualifying session and then had to retire that replacement car after contact with the #3 WRT Audi in the early hours of the morning. 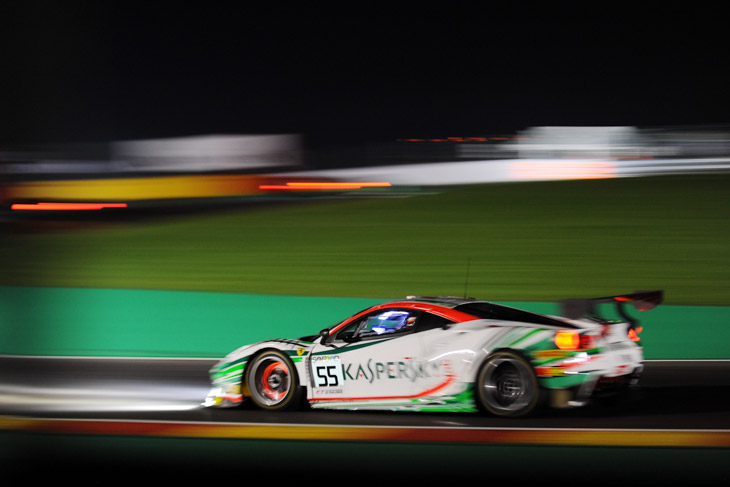 For much of the race, victory looked to be going the way of the #55 Kaspersky Motorsport Ferrari (above), with starting driver Giancarlo Fisichella, pole man James Calado and marque stalwart Marco Cioci putting in a sterling performance at the front of the field. But contact with the #90 Mercedes at La Source just after six in the morning damaged the 488’s steering, putting Cioci in the wall when he tried to negotiate Eau Rouge a few hundred metres later.

Other Ferraris to suffer disappointing races were the #50 (eliminated in a huge crash at Eau Rouge that fortunately left driver Pasin Lathouras unharmed) and the #72 SMP Racing machine of Shaytar, Rigon and Molina, which was sidelined with power steering issues and would come home 24th overall in the end. 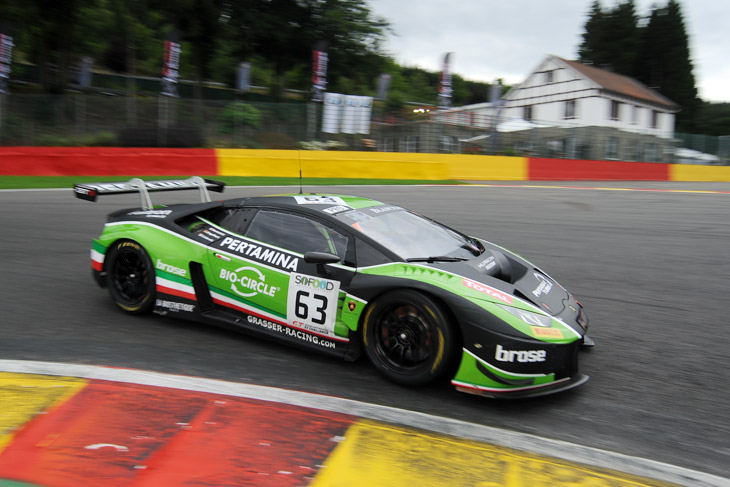 The Blancpain GT Series championship-leading #63 Grasser Lamborghini (above) of Mirko Bortolotti, Christian Engelhart and Andrea Caldarelli was a front-runner for much of the early stages and crucially managed to be placed second at the six-hour mark and be leading at 12 hours to claim a healthy haul of championship points. But there pace fell off somewhat after that and eventually Engelhart crashed due to brake failure, ending the car’s race.

Taking into account the eventual race result, the points leave Bortolotti and Engelhardt (who are contesting both the Sprint and Endurance elements of the series) second in the Blancpain GT Series heading into the next round at Budapest in August, behind Vincent Abril, who takes the points lead solo courtesy of his Spa 24 second place. And together with Caldarelli as a trio, Bortolotti and Engelhart are second in the Blancpain GT Endurance Cup standings behind the full Bentley #8 crew of Soucek, Soulet and Abril, with just one round (at Barcelona in October) remaining.

Another WRT Audi to have a race to forget was the #6 Richelmi/Berthon/Treluyer R8, which suffered total electrical failure, while Marcel Fassler and Andre Lotterer’s reunion, in the #5 WRT Audi shared with Dries Vanthoor, didn’t go entirely to plan, either: the car finished xx after losing eight minutes to unscheduled brake repairs. Jamie Green, too, had an unhappy Spa 24: the #17 R8 retired with damage after a coming-together with another car on the way out of Rivage. Of the two ISR machines, the #75 retired due to overheating caused by a blocked radiator and the #76 finished a solid ninth. 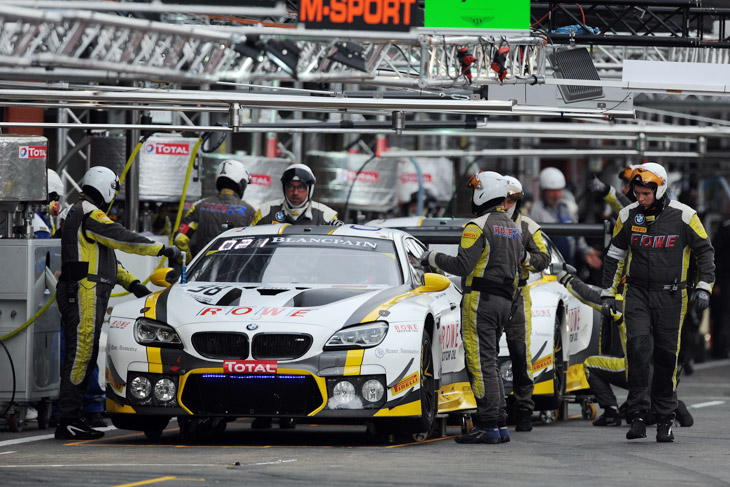 BMW scraped a top-10 finish with the #98 ROWE Racing M6 of Nicky Catsburg and DTM regulars Tom Blomqvist and Bruno Spengler, which at one point looked in contention for the win, but was hampered by unscheduled repairs that cost it around five laps. Last year’s winners Eng, Sims and Martin in the sister #99 car were robbed of the chance to play any significant part in proceedings early on by a right-rear puncture that caused wheel and wheelarch damage. They battled on almost to the flag, but had to retire the car within the last hour.

The #7 Bentley suffered contact with a Cup-class Porsche early in the night and spent much of the race without ABS, leaving Smith, Kane and Jarvis struggling to a 14th-place finish at the flag, while both Emil Frey Jaguars retired, the #14 due to a barrier hit by Christian Klien and the #114 with an apparent engine issue. 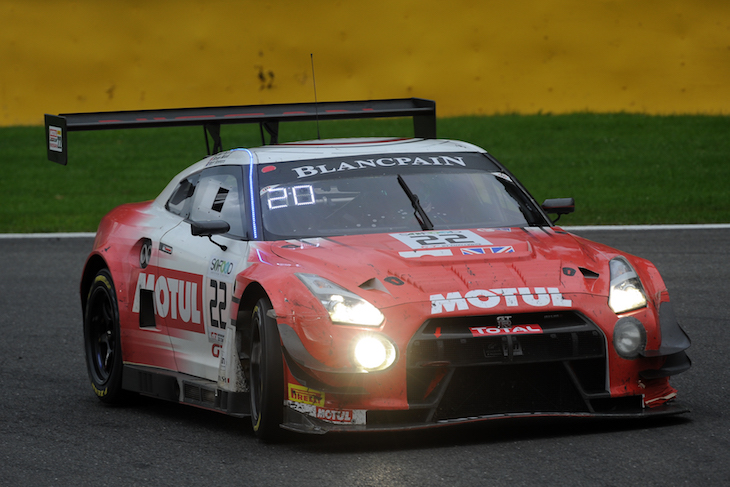 Despite strong pace in qualifying, both RJN-run, Motul-sponsored Nissan GT-Rs had races to forget, winding up 13th and 30th after long recovery drives through the night. The #22 (above) faced a delay on track on almost the first lap, then a long stop-go penalty for a chassis change after a qualifying shunt, while the #23 also spent time in the garage. 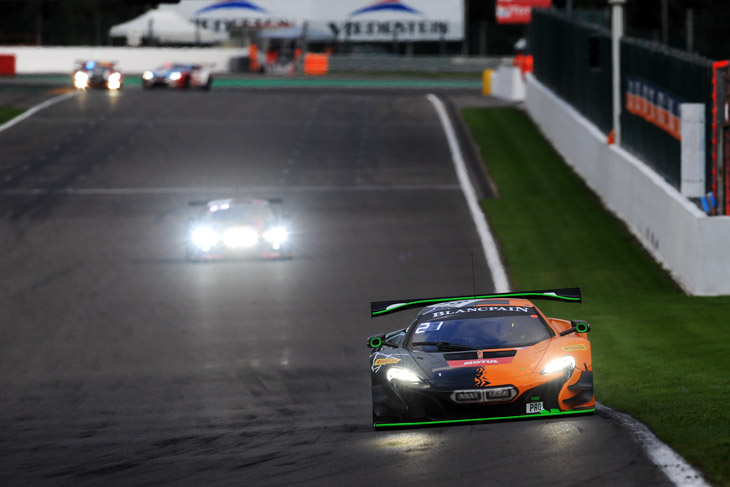 It was a miserable event for the quartet of Strakka Racing McLarens, all four of which retired with various issues, leaving the Am Cup #188 Garage 59 entry to salvage a scrap of honour for Woking by coming across the line 32nd out of 33 classified finishers and the last of the GT3 runners.

The Am class was won by the #888 Ferrari of Marco Zanuttini, Jacques Duyver, David Perel and Niki Cadei, with the #488 Rinaldi Ferrari and #36 Walkenhorst BMW completing the category podium. 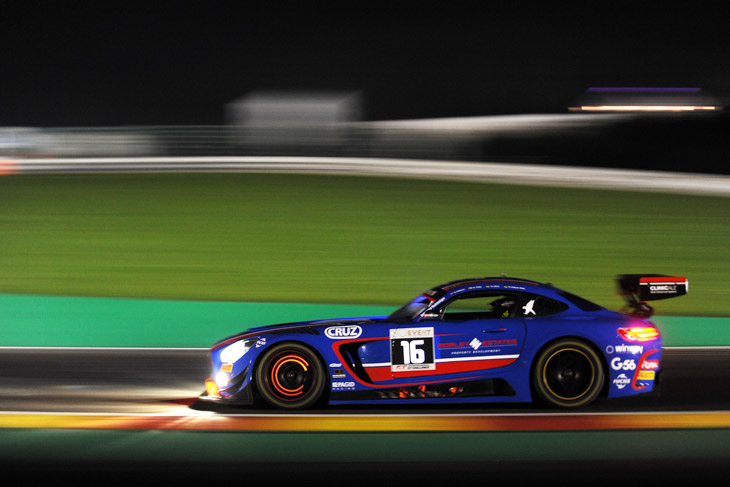 In Pro-Am, the #16 Black Falcon car of Morley/Toril/Kirchhofer/Goetz was challenged only by its sister #18 Mercedes, which came to grief in a clash with the Team75 Porsche when Hubert Haupt was at the wheel. That left the #16th clear to come home just outside the overall top 10 in 12th. The #97 Oman Aston Martin, which led many laps in the hands of Johnny Adam, finished second in the class and 15th overall, enough to secure Adam and Ahmad Al-Harthy the 2017 Blancpain Pro-Am Endurance Cup title honours a round early. Third in Pro-Am and 17th overall went the way of the #961 Spirit of Race Ferrari, which boasted endurance veterans Nicolas Minassian and Toni Vilander on the driving strength, alongside Alex Demerdjian and Davide Rizzo. 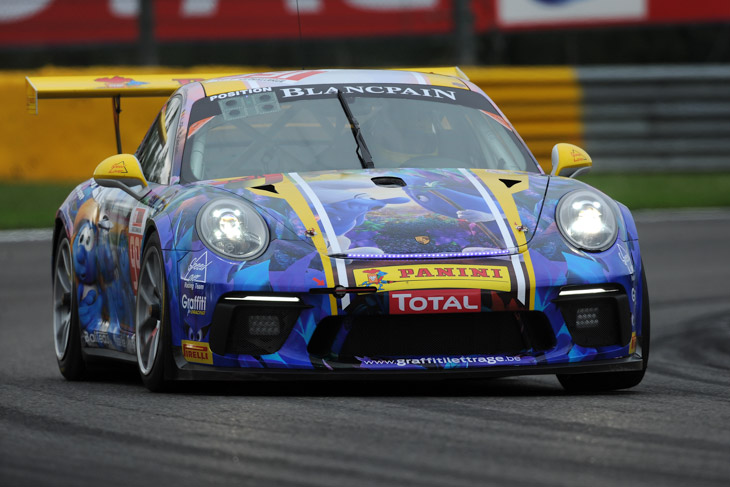 The 35th and last runner at the flag was the #991 Porsche, the only one of the two Cup-class entries in the ‘Group National’ class to make the end of the race, the other being the aforementioned #56 that contacted the #7 Bentley.