The latest round of the FIA World Endurance Championship took us to Germany and to the Nurburgring. While the idea of racing on the Nordschleife in these cars sounds awesome, in reality I think we’ll always stick to the GP circuit. However, our resident Ring expert, Stefan Mucke, did take Ford’s team Co-ordinator Carol Melville on a hot lap in a Focus RS as a birthday treat! It felt like quite a short break between Le Mans and the 4th round of the championship, I didn’t feel normal again until the following Friday and after a week of relaxing and two weeks of training we were back at it!

Andy Priaulx and I teamed up to qualify 6th on the grid for Sunday’s race. We were obviously disappointed with this but we were continuing to find the set up for the race and weren’t overly concerned with the ultimate one lap pace. Nurburgring will never be the strongest circuit for the long wheelbase Ford GT and it was going to be even tougher with an extra 20 kilos of Auto Balance of Performance ballast after successful results at Silverstone and Spa. 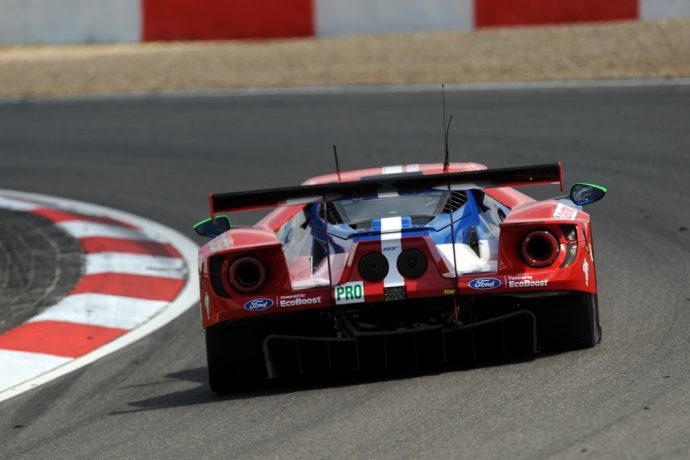 Andy started the race and after consolidating over the opening laps the GT field was pretty much line astern from 1st to 6th as the fast starting Aston Martin of Marco Sorenson was proving to be the cork in the bottle. While it looks good on TV having all the cars bunched up behind an Aston it is so frustrating in the car as you catch them under braking and through the corner only to be left for dead as you get back on the power and drive down the following straight. This means you’re always out of overtaking range at the next corner and presents little to no opportunity to pass.

I jumped in on the two-hour mark from 4th place and immediately settled into a decent rhythm. It seemed like we had the pace of the Astons but as the race progressed the Porsches and the one Ferrari left in contention started to pull away from us. The first stint flew by without drama and after a slick pit stop from the #67 crew I was back out but disaster struck in the second part of my double stint when I was tagged into a spin.

The two leading Porsche LMP1 cars came to lap me and the leader came round my outside into turn 12 while his team mate also tried to follow. Unfortunately, it’s quite a fast corner which tightens up on the exit and despite trying to keep the car as tight to the apex as possible we hit on the exit and it was enough to spin me round. It certainly wasn’t intentional but it was quite a risky move. Despite being spun backwards and facing uphill in the gravel I somehow managed to rallycross my way back onto the track without the need of a tractor so we only lost 50 seconds. 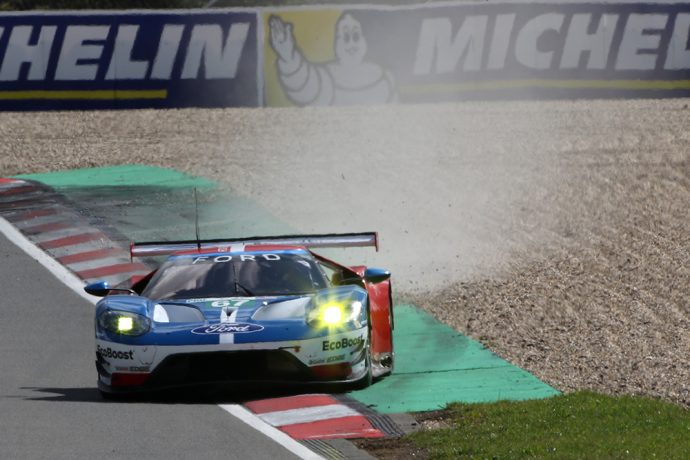 Andy and I had a single stint each over the remaining two hours and he was involved in a fantastic battle between Olivier Pla in the #66 Ford and Daniel Serra in the #97 Aston. With the fast accelerating Aston being the cork in the bottle once again, it was an opportunistic pass that saw Andy overtake both cars and move up to 5th. After the final sequence of pit stops I got back in the car in 6th place back behind the #97 once again. I quickly closed on Jonny Adam but overtaking proved exceptionally difficult. After being glued to the Aston’s bumper through a corner I would always arrive at the next one just out of passing range and I knew that he knew, as long as he had a clean exit from each corner he would be very hard to pass.

After about 30 minutes of staring at Aston’s rear bumper sponsors I managed to get a super fast run through the Schumacher Esses and dive down the inside into turn 10 before he could pull far enough outside of my lunging range. I then finished off the race to bring home 10 valuable World Championship points and Andy and I retained our 11 point lead in the Championship.

Next up for us is Mexico in September. Enjoy your summer holidays, I’m heading over to Guernsey to see what this island life that Andy talks up is all about for some chilling on the water and training on the beaches. I can’t wait for the fly away races to start!