The typical Eifel weather conditions dominated the headlines of the VLN season highlight, the ROWE 6 Stunden ADAC Ruhr-Cup Rennen, which contrary to all other races runs over a six hour distance instead of the usual four. In dry conditions, the participants of the longest VLN race of the year went on to start the race, but in the course of the six-hour distance, the teams were repeatedly confronted by partly strong rain showers, which is why the second half of the race mutated to the weather gamble. 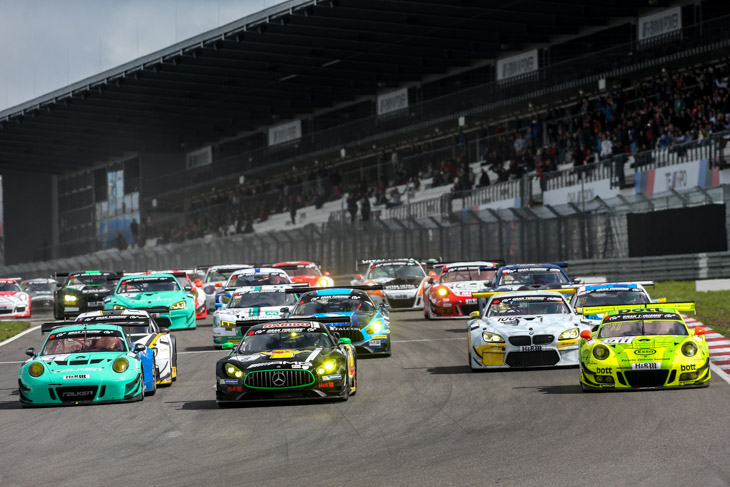 Over the entire race distance, the Manthey Racing Porsche 911 GT3 R was situated in the lead group, and by luck in the tire selection, Romain Dumas, Kevin Estre and Matthieu Jaminet were able to secure the third season victory for the green and yellow 911. “We had the absolutely perfect strategy today, in the wet we were perhaps not the fastest but with the mixing conditions we were faster than our competition and that gave us the edge. Ten years ago I won the 6-hour race as well, and today I am just as happy about the victory as before. I hope I can still be in this race in ten years’ time, “Romain Dumas said after the race.

Martin Ragginger and Klaus Bachler crossed the finish line in the Porsche 911 GT3 R from Falken Motorsports in second place. At the start of the race, the turquoise blue Porsche lost a touch of contact to the leading group, but the two Austrians were able to fight back and take the lead even by the right tire selection. 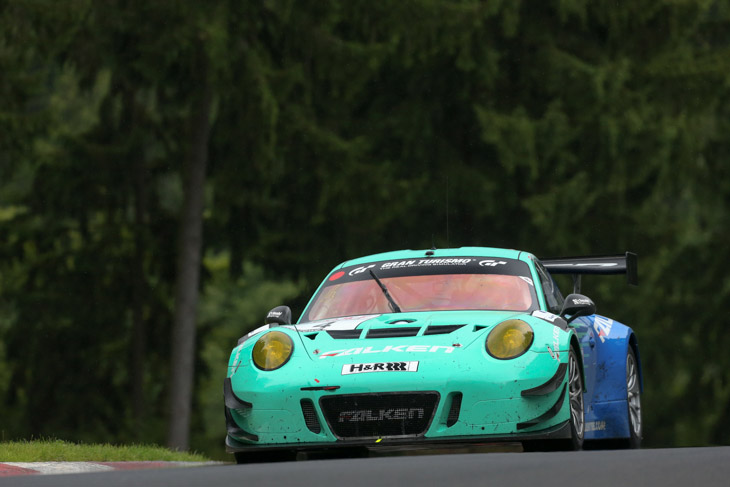 In a later bad weather phase, Bachler slipped off the track and had to undertake an unscheduled boxing in order to clean the radiator and to take on rain tires. “We are now on the podium for the second race in a row, and that is precisely what we are working on, regularly to be fighting for podiums and race wins. Today the top group was decimated by many accidents and so we are just happy to have taken second place in these weather conditions, ” Martin Ragginger after the race.

Third place went to Frank Stippler and Peter Terting in the Audi R8 LMS entered by Phoenix Racing. The duo was also one that lost valuable ground through the wrong tire selection in individual race parts and had just four minutes behind the victorious Porsche when the chequered flag fell. Peter Terting was especially happy after the race, because “today is my first GT3 race on the Nordschleife and directly to the podium is of course great. We were a bit unlucky in the tire selection and are therefore happy about third place, because in some racing stages it looked as if we missed the podium.” 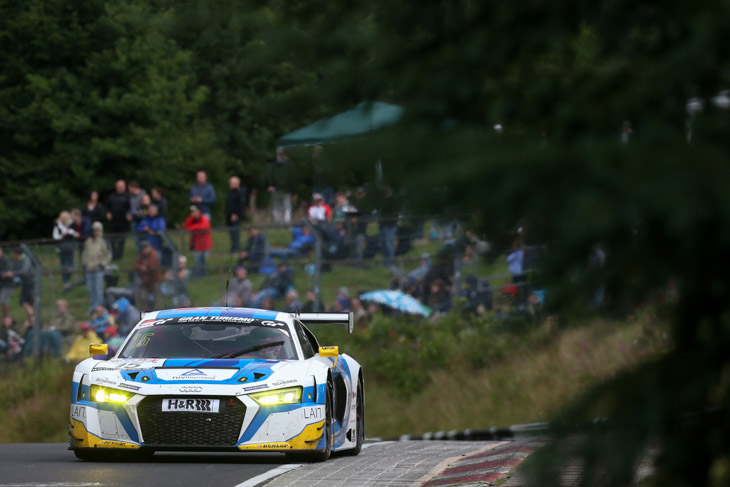 Renger van der Zande, Edward Sandström and Luca Stolz crossed the finish line in the Mercedes-AMG GT3 of the Haribo Racing Team in fourth place. The Goldbear-racer was mainly on a podium course in the first third of the race, but a stop and go penalty took them out of contention. Nevertheless, the trio finished only twelve seconds behind third place.

The debut of the new Mercedes-AMG GT4 ended with a classic victory for the new for 2018 car from Affaltabach. Fabian Hamprecht, Mike Stursberg and Thomas Jäger were able to secure the triumph in the class SP-X when the chequered flag fell. 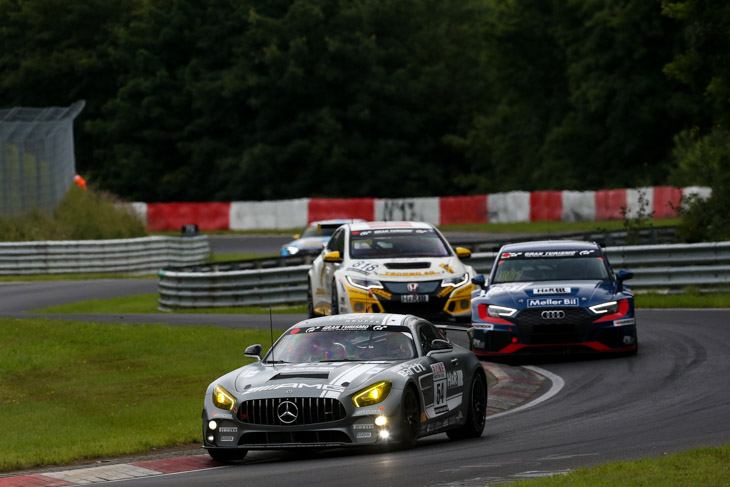 The second Mercedes-AMG GT4, which was shared by the Black Falcon Quartet, Jan Seyffarth, Fidel Leib, Stefan Karg and Alex Toril, had to end its test race early due to minor problems. Another new for 2018 GT4 car entered in the race was the BMW M4 GT4, which was run by Rowe Racing. “Iain Wright,” Thorsten Drewes, Dirk Adorf, and BMW junior Ricky Collard lost a few laps, finishing the race only on the second class in the SP8T, this was due to a loose turbo hose clamp.

The next round of the VLN long-distance championship will take place on 2 September. The 40th RCM DMV Grenzlandrennen then goes again over the regular distance of four hours.