Rino Mastronardi completed Spirit of Race co-driver Rui Aguas’ comeback by finally overcoming Marchy Lee on the penultimate lap to take second ahead of the Audi Hong Kong entry that was also driven to Silver Cup victory by Shaun Thong.

The #999 Mercedes-AMG lined up second but had taken a lead it wouldn’t relinquish by the time the 34-strong field rounded Turn 1. Buhk then spent the opening laps nursing cold tyres before beginning to edge clear once they were fully up to temperature.

Pole-man Max Wiser kept the German honest early on but his mirrors were soon full of Alex Yoong’s Audi which spent the first 15 minutes glued to the Spirit of Race Ferrari’s tail. The Malaysian briefly took second at Turn 1 but out-braked himself and slotted back into third, which became fourth by the end of the stint thanks to a charging Aguas.

Indeed, the Portuguese driver starred in the first 30 minutes. 11th at the end of lap one, he had soon carved his way back up the order before passing Yoong and then team-mate Wiser in quick succession ahead of the pit window opening.

Buhk’s lead over the Ferrari had grown to 11 seconds before pitting just as the 10-minute window closed. That was ample to negate the five-second penalty he and Abbott had incurred for finishing third in Saturday’s race, and the Briton duly rejoined seven seconds clear.

A slower pitstop for Aguas, who stopped the lap before Buhk, briefly dropped co-driver Mastronardi to fourth behind team-mate Jiang Xin and Marchy Lee, who nipped through as the Ferrari exited the pits. However, Jiang soon fell behind both drivers, which set up a fantastic nose-to-tail battle between Audi and Ferrari over the final 20 minutes.

While Abbott’s lead fluctuated between five and seven seconds, the chasing pair were never separated by more than a car’s length as time and again Mastronardi looked to slipstream Lee down the start/finish straight and into Turn 1. Finally, and with just two minutes left on the clock, the Italian forced his way down the inside at Turn 13 to decisively take a second place he wouldn’t lose.

“Maxi [Buhk] handed the car over in a really good position so my job was more about maintaining concentration, hitting braking points and bringing it home. The traffic was pretty kind as well, which isn’t always the case, and especially at a track like Fuji,” commented Abbott.

“To be honest it was almost the perfect race, so credit to Maxi and the team for putting us in that position. I had a daughter two weeks ago so I’m dedicating this victory to her.”

Further back, Hiroaki Nagai and Kota Sasaki made up for yesterday’s puncture with a deserved fourth place in their ARN Racing Ferrari. The latter started fourth and ran sixth for much of the opening stint before Nagai resumed in seventh after the stops. The Japanese driver wasn’t hanging around, though, and successfully passed Tim Sugden, Alex Au and Jiang before the chequered flag.

Jiang came home fifth in Spirit of Race’s second Ferrari ahead of Sugden, whose GruppeM co-driver Jules Szymkowiak also pitted from sixth, while the D’station Racing Porsche of Satoshi Hoshino and Seiji Ara came through from 10th to finish seventh.

OD Racing’s Audi driven by Aditya Patel and Mitch Gilbert picked up a couple of places from where it started to finish eighth, although one of those positions came at the expense of Absolute Racing stablemates Jeffrey Lee and Alessio Picariello who retired early with a gearbox issue.

This weekend’s results have helped Abbott extend his overall championship advantage to 33 points over Lee and Thong. He’s also 75 ahead of Aguas in the Pro/Am standings. Meanwhile, Lee and Thong lead Patel and Gilbert by 37 in the Silver Cup classification, and Teo Bee Tat and Tjiptobiantoro have replaced Naoto Takeda and Takuya Shirasaka at the top of the Am Cup table. 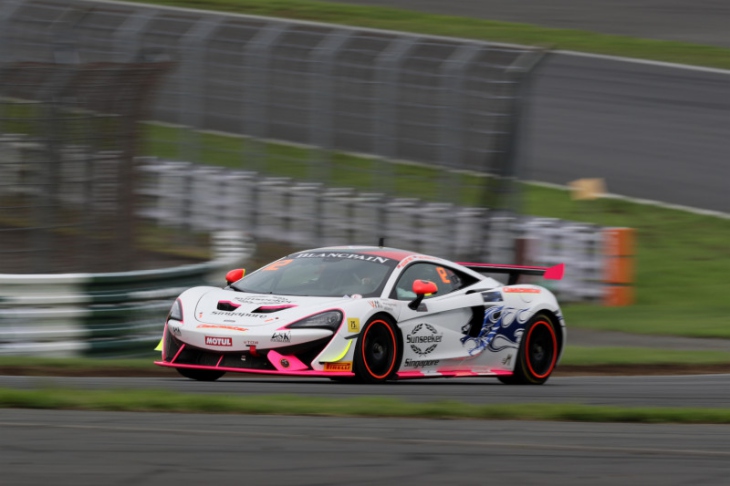 This time Mok Weng Sun lined up on pole and maintained the lead before establishing a half-minute advantage ahead of the pit window. Co-driver Richard Wee then climbed aboard and set fastest lap en route to a regulation win on the 570S’s first weekend in Asia.

“It’s been a fantastic weekend for us,” Sun said. “The McLaren only arrived mid-week but has worked straight out of the box; we didn’t have time to work on set-up and just used what we were given, but that was more than enough. Richie [Wee] and I have been able to get on top of the car pretty quickly, but Fuji is also somewhere we expected it to be strong and that was definitely the case this weekend. Two wins and two pole positions – you can’t ask for any more than that.”

Behind, the battle between the class’ Porsche contingent raged all race long. EKS Motorsports’ Eric Lo maintained second throughout the opening stint despite pressure from Craft-Bamboo’s Jean-Marc Merlin and Ringo Chong (HubAuto Racing). The positions turned full circle after the stops, though, when Chong’s co-driver Zang Kan passed both Frank Yu – in for Merlin – and Byron Tong.

Yu ultimately claimed the final podium spot ahead of Tong, which handed the Craft-Bamboo crew a narrow three-point championship lead over their EKS rivals.