It was a weekend of new partnerships and returning stars for the International GT Open at Silverstone.

After last appearing at the season-opener in Estoril, António Félix da Costa returned to the championship to partner Lourenço Beirão da Veiga in the #51 Teo Martin BMW.

At Imperiale Racing, a third Lamborghini Huracan GT3 (#63) had been entered for Marco Mapelli and Giovanni Venturini. The team had elected to split Venturini and reigning champion Thomas Biagi in an effort to double their chances of winning the championship. Biagi would be joined in the #1 by
Raffaele Giammaria.

Lee Mowle Motorsport (#30 Mercedes AMG) and Wessex Vehicles (#39 Lamborghini Gallardo) also joined the entry list for their home round of the championship. 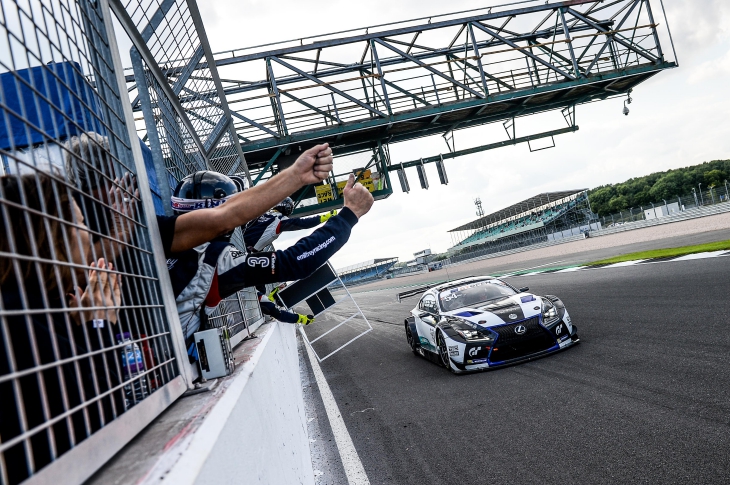 The Pole-sitter for the first race of the weekend was Albert Costa (#54 Emil Frey Lexus), and the Spanish driver was joined on the front row by factory Lamborghini driver Marco Mapelli in the #63 Imperiale Lamborghini.

As the field received the green lights, it was Costa who held onto the lead, just ahead of Mapelli in the #63 Imperiale Huracan, and a pair of British-driven Mercedes; the PRO-AM #20 SPS Mercedes of Tom Onslow-Cole narrowly held off Phil Keen (#30 Lee Mowle Mercedes) in the early going.

As Keen hounded the back of the all-green AMG GT3, Marco Cioci (#8 AF Corse Ferrari) loomed large in the mirrors of Craig Dolby in the returning #39 Wessex Vehicles Lamborghini Gallardo. Dolby held off Cioci in the early stages of the race, utilising the impressive straight-line speed of the aging Reiter-built Lamborghini to hold off the Ferrari 488. However, with ten minutes in the books, Cioci passed the timing line ahead of Dolby.

After 15 minutes, Albert Costa and Marco Mapelli had broken away from the rest of the field, building their gap at a rate of over a second per lap. Onslow-Cole had a slither of breathing room between he and Phil Keen; fifth-placed Victor Bouveng (#65 Teo Martin BMW) was gradually closing in on them both.

With 28 minutes completed the pit window opened, just after the leading pair passed pit entry. Victor Bouveng, Andrea Fontana (#23 Imperiale Lamborghini) and Miguel Ramos (#488 Spirit of Race Ferrari) all made their stops at the earliest possible opportunity. Bouveng’s teammate Fran Rueda would lose positions to both Vito Postiglione (#23) and Mikkel Mac (#488) in the pits, thanks to 15 seconds of additional pit stop time for the #65 Teo Martin BMW following their victory at Hungary in July.

The Imperiale Lamborghini team had very little respite in the pits, as Thomas Biagi brought in the #1 Huracan just moments after Postiglione left. Biagi handed the car to new teammate Raffaele Giammaria, who would find himself in fourth at the end of the pit window. However, he dispatched Valentin Pierburg in the PRO-AM leading #20 SPS Automotive Mercedes for third overall shortly thereafter.

The #63 Imperiale Lamborghini of Marco Mapelli came in with just under 34 minutes of the race to go, having hounded the back of Albert Costa’s race-leading Lexus for several laps prior. After the stops, Giovanni Venturini (#63) found himself almost 13 seconds behind Philipp Frommenwiler in the Emil Frey Lexus.

Meanwhile, with 17 minutes to go, Pierburg came under pressure from Shaun Balfe. The German was visibly pushing to hold off Balfe, but the driver of the #22 Balfe McLaren ultimately took the PRO-AM lead at Brooklands.

Piergiuseppe Perazzini spent a majority of his stint in the #8 AF Corse Ferrari defending from an ever-growing queue of cars. Dominik Farnbacher (#54 Farnbacher Lexus) was the first to pass the Italian, with Ryan Ratcliffe threading the #30 Lee Mowle Mercedes through shortly thereafter.

Unfortunately for Perazzini, the pitstop for the #8 was three seconds short of their minimum time, and that time was claimed back by the officials in the form of an added time penalty.

At the end of the race, it was Philipp Frommenwiler who took the victory in the #55 Emil Frey Lexus, 15 seconds clear of Giovanni Venturini in the #63 Imperiale Lamborghini. The sister #1 Huracan crossed the line third in the hands of Raffaele Giammaria, while PRO-AM victor Shaun Balfe crossed the line in fourth overall.

Valentin Pierburg (#20 SPS Mercedes) and Michael Meadows (#10 Jordan Racing Bentley) rounded out the PRO-AM podium, while the #99 Sports & You Mercedes of Manuel Da Costa and Miguel Sardinha took AM honours. After a dramatic qualifying session, Fran Rueda (#65 Teo Martin BMW) claimed Pole Position for the 60 minute race on Sunday. It was an all-BMW front row, with António Félix da Costa lining up second in the #51 Teo Martin entry. Giovanni Venturini lined up third in the #63 Imperiale Lamborghini, alongside the PRO-AM class #88 Garage 59 McLaren, which would be started by Côme Ledogar.

Before the green flag waved, dark clouds loomed overhead, and drizzle began to fall on the circuit as the race began. With the field on slicks, the field were slightly more cautious than usual on lap one. A majority of the field made it through the first lap unscathed, though Johnny Mowlem (#25 FF Corse Ferrari) suffered a spin at Stowe.

The Teo Martin BMW drivers remained in grid order off the start, while Ledogar shuffled the #88 McLaren up to third at the expense off Venturini.

However, the order did not remain stable for long, with Da Costa making a lunge at Club at that sent both he and Rueda wide. Both cars continued, with Da Costa taking the lead and Rueda just fighting off Ledogar, Venturini and the other Imperiale Lamborghinis to retain second.

Rueda held up the pursuing train on the run to the Formula One front straight, which bunched up the field, and eventually left Ledogar out on the grass on the approach to Abbey as the three Lamborghinis searched for track space. Ledogar was left in seventh and second in PRO-AM, behind Vitantonio Liuzzi (#555 FFF Lamborghini), though the Garage 59 driver soon re-gained the class lead.

As they crossed the line for the second time, it was Da Costa ahead of Rueda for Teo Martin BMW, followed by Venturini, Raffaele Gianmaria (#1) and Vito Postiglione (#23) for Imperiale Lamborghini.

While occasional spits of rain persisted throughout the 60-minute encounter, conditions never worsened to a point where intermediate tyres came into consideration.

With 12 minutes completed, Ledogar was on the attack for fifth overall, as he searched for a way past Mikkel Mac in the #488 Spirit of Race Ferrari – before long, he was through, and chasing down the trio of Lamborghinis.

With 25 minutes to go – a minute before the window closed – both Da Costa in the race-leading #51 Teo Martin BMW and Venturini in the #63 Imperale Lamborghini made their stops. With a minimum pitstop time of just 65 seconds, the #51 made its way back out with a comfortable lead in the hands of Lourenço Beirão da Veiga.

Meanwhile, Venturini’s team had to ensure that their stop exceeded 90 seconds before Marco Mapelli left the pits; a symptom of their successes the previous day.

While da Veiga initially looked to have a comfortable lead over second placed Victor Bouveng in the #65 Teo Martin BMW. However, Bouveng reeled in the leader with a dozen minutes left on the clock, but despite his best efforts, he failed to find a way past, and da Veiga took the chequered flag.

In the dying moments of the race, Albert Costa took third position in the #54 Emil Frey Lexus after a supreme stint which saw him take the RC-F GT3 over outside of the top ten. Marco Mapelli crossed the line fourth in the #63 Imperale Lamborghini, just ahead of Andrea Fontana in the sister #23 car.

The first of the PRO-AM class cars was Jordan Witt in the #10 Jordan Racing Bentley, ahead of Hiroshi Hamaguchi in the #555 FFF Lamborghini. They finished 10th and 11th in the overall classification.

The AM victory went the way of Davide Rizzo and Alex Moiseev in the #48 Kaspersky Ferrari.

Following Silverstone, Giovanni Venturini leads the championship with 80 points. Philipp Frommenwiler and Albert Costa of Emil Frey Racing are equal second on 76, while Thomas Biagi is third with 74.

The #99 Sports & You Mercedes duo, who are now entered under the pseudonyms Manuel Da Costa and Miguel Sardinha, lead the AM championship with 33 points apiece, just one point clear of Moiseev and Rizzo in the #48 Kaspersky Ferrari.