Everyone loves a trier, even more so the underdog. Developing a race car in public in the high profile British GT Championship however with a car that wasn’t even a turn-key package at the outset takes some resolve. After a challenging series debut throughout 2016, GPRM Motorsport took a step back from the spotlight this year to concentrate on the fundamentals with its Toyota GT86 GT4 package.

It’s been hard graft, but speed is unquestionably now on tap, reliability now apparent spoiled only by a random racing incident at Donington Park. It was there we caught up with Director and team principal Gary Blackham for an update on progress.

“We’ve built the whole car, but as a manufacturer we’ve taken a couple of wrong turns with our choice of suppliers in the past and learned some fairly expensive mistakes along the way. As a private company building a car in what has now moved to a market representing several manufacturers we are in a different ball game to when we started. We expected GT4 would grow but didn’t expect it to mushroom as quickly as it has.”

GPRM’s project with the GT86 is based on a sound commercial idea, and has developed as a viable and affordable customer option with low running costs, but the learning curve has been steeper than anticipated. 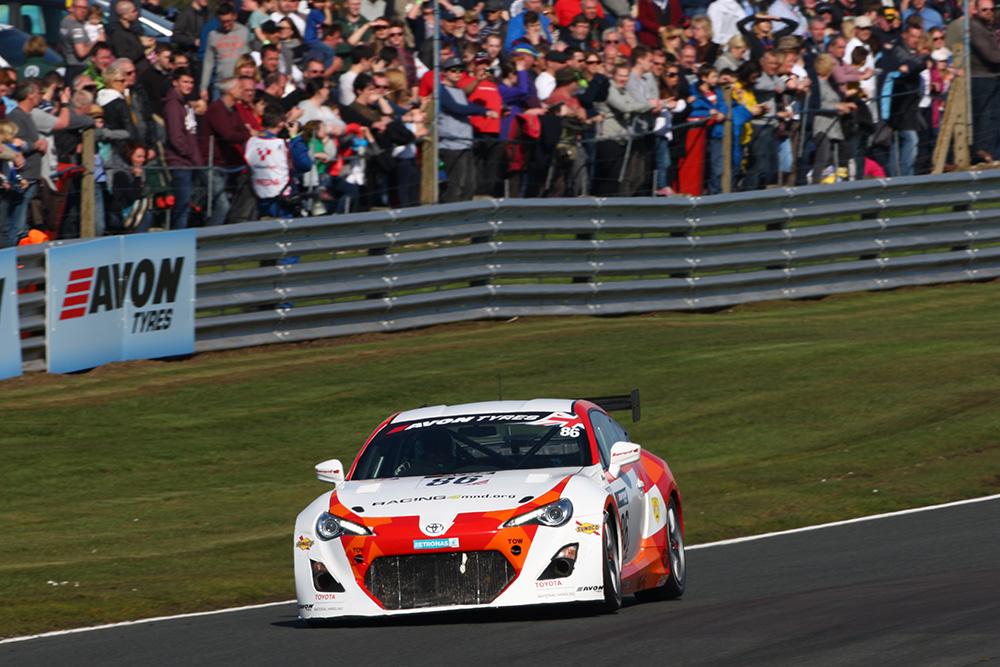 “If we were truly honest we probably wanted to be where we are now this time last year. But taking stock during last year, having entered British GT at the beginning of the season, we felt from the lessons we’d learned that to go rushing off to the first 2017 race half-cocked was not the best way of doing it. So we took a considered step back and did a lot more development: test days, track days…any opportunity to get some miles on the car. We took the engine work in-house, whereas before we’d been using some external sources. We started calibration work with Nicholson McLaren and made great progress, and working with Mountune found some good gains in terms of fuel consumption.

“Mike Endean, who founded Xtrac, has also been hugely supportive. We’ve unlocked areas that 12 months or even 6 months ago we were just not getting to. That has catapulted things forward and now we have a lot of confidence in the package. Recently we’ve been working with Life Racing on the electronics and more calibration work and we’re in a much better place.”

Is it just the one race chassis?

“There are actually three chassis plus a spare. We built two spare shells, but one is basically a book for all the bodywork settings. The car that we’ve brought today is the one we’ve done most of the test work with – the car we used for Silverstone ran a few updates but this was an opportunity to run the real car in its current guise in anger. 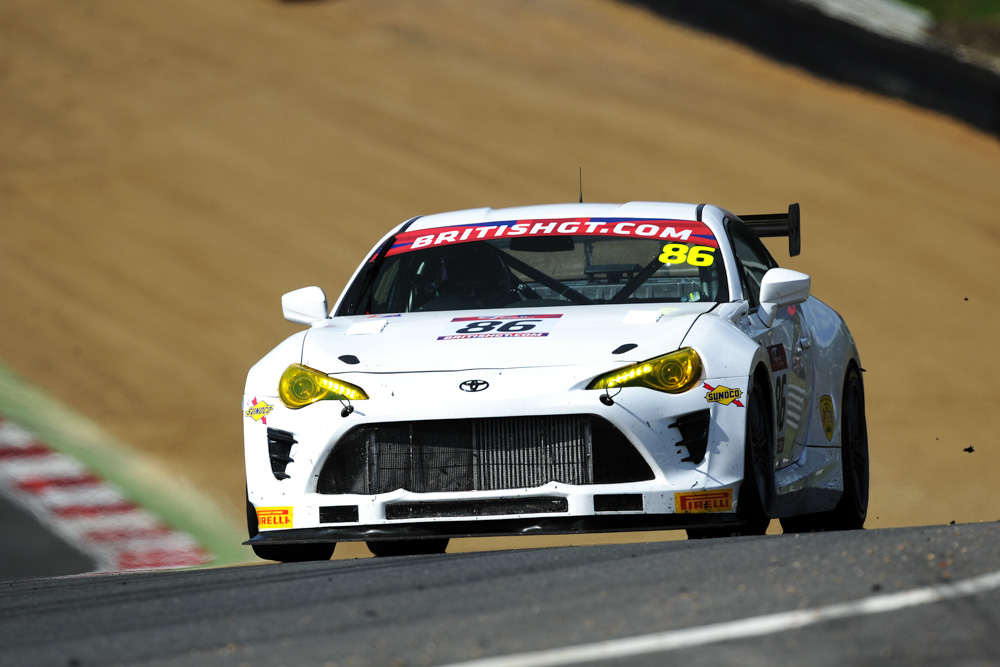 As a company we make nearly all the parts that are on the car, which means a lot of the drivetrain stuff is bespoke. The shell, roll-cage and all the structural stuff we do in-house and most of the machined parts, the hubs, wishbones, etc. we do ourselves.”

Gary has a solid industry background, having originally been with current business partner Roger King at Broadspeed, and knows success in this business is never easily achieved. And without Toyota factory support (notably) GPRM has been resolutely ploughing its own furrow, un-phased by the complex set of component relationships throwing unique challenges at each competitive outing. The car has always had pace, impressively so at Donington where as an Invitation entry it placed itself just three-tenths off GT4 pole to share the front row, yet the matrix of reliability has only recently taken shape.

“Roger’s design background means that now the basic package is getting sorted and we’ve got some more funding we can start to isolate areas of further development and concentrate on those to make further gains. We’ve run programmes with Audi and I’ve worked with Schnitzer and one of the things people don’t consider is that the might of a factory effort is a different ball game to when you’re a small privateer.

“The costs of being competitive are still in many cases the same, so you’ve got to find a way of funding the development. Us doing many things in house is a good model and if we have to go out, for example on the engine programme, that’s something you can’t ignore but it’s a more controlled, stable financial decision. We’ve got a good partnership with Life Racing and we’ve got some very good ideas now we’re keen to develop.”

That controlled approach has meant fleeting appearances in this year’s series.

We chose to stay within the Invitational class; partly on grounds of cost, partly because of timing. The homologation schedule has always been at the wrong time

“We chose to stay within the Invitational class; partly on grounds of cost, partly because of timing. The homologation schedule has always been at the wrong time. We’ve either just discovered something positive before we were due to go or we’ve had a problem. And there’s cost involved.

“The car has been going better and better. Donington has been a great boost for the guys in the team and the plan now is to push on and do the homologation. Having to retire the car was a big frustration after such a great weekend but that was just sheer bad luck, the engine and powertrain package having really delivered” (a failed stub axle ended the GT86’s race in its second hour having run consistently in the top three in GT4).

We intend to be talking to SRO about next year. My caution at the moment though is the arrival of a Mercedes, an Audi and a BMW in GT4…talk even of a Jaguar: is our engine performance where it needs to be or do we need to do more work? That’s an unknown.” 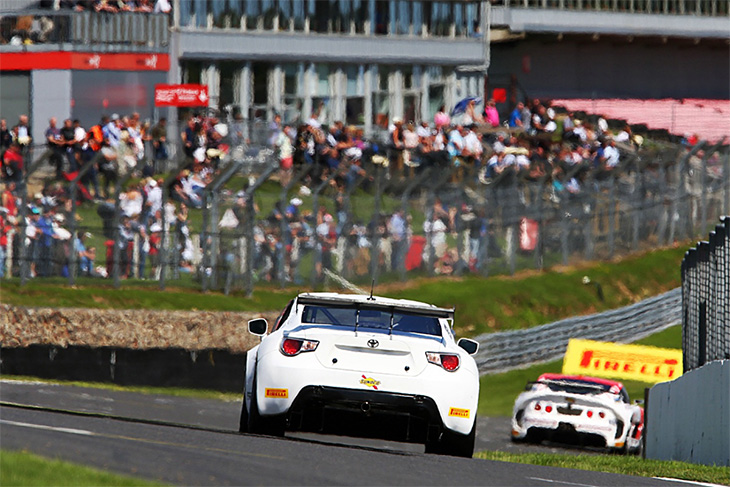 So with customer partnerships needed to further hone the package, what is the proposition?

“There is a customer right now who is quite keen to buy a car, but we’ve held back. Mainly because we hadn’t felt we were at a point to say ‘there is the package, you can go and run that.’ Once we are at that stage though, which is probably at the end of this year, we’ll be at a position with the homologation to say that the cost per kilometre to run our car is vastly cheaper than one of the ‘newer’ GT4 cars.

“We use a lot of OE stuff; no different to anyone else in that respect, even GT3. The difference though is that the base car is about £27,000. And the basic component costs make the package very affordable: a GT86 headlamp unit is about a tenth of that of a GT3 car, for example, our body panels are considerably cheaper not being made from expensive carbon. It’s got to be a practical race car and we’ve worked to a target customer budget.”

Which brings into consideration the direction of travel for GT4 in the British series. Not unlike other championships, the influx of driver budgets and factory interest is potentially shifting a traditionally ‘entry level’ category further towards a springboard for young talent in technically advanced supercars.

This may not be a bad thing, and the continued competitiveness of the Ginetta G55 GT4 proves that the BOP has worked this year, but maintaining that balance is key if GT4 is to preserve its privateer appeal and avoid class warfare in its own ranks. There is also the question of the general format for 2018, for which Gary offers positive closing comment.

“I really do hope SRO succeeds in keeping the GT3 cars in this series in good number and that GT4 is able to continue racing together with them. If we get a whole lot of GT4 entries then great, we sell more GT4 cars, but the young guys coming in are looking to build careers in endurance racing, so wherever they go there will be slower machinery they’re either driving in or around.

“That’s the nature of the sport and to keep that element at this level is an important thing.”