UPDATE: Following the conclusion of the Le Mans Cup finale, the race-winning DKR Engineering Norma M30 was excluded from the results. The Motorsport98 Ligier therefore inherited the win.

You can read more about the DKR disqualification here, and view the final results.

The #3 DKR Engineering Norma M 30, driven by Alexander Toril and Jean Glorieux, 2017 Michelin Le Mans Cup champions, won today’s race at Autodromo do Algarve, in what turned into a dramatic finale to the season.

Taking the final podium position was the #55 Spirit of Race Ligier, piloted by Claudio Sdanewitsch and Michele Rugolo.

With the GT3 championship at stake, the category saw a fascinating battle with the title swinging between the #46 Ebimotors Lamborghini Huracán GT3 driven by Emanuele Busnelli and Fabio Babini and the #7 Lee Mowle Mercedes AMG GT3 piloted by Lee Mowle and Phil Keen.

The GT3 class victory was taken by the #20 Gulf Racing UK Porsche 911 GT3R driven by Andrew Baker and Ben Barker. Second in class was the #7 Lee Mowle Mercedes and, taking the final podium position, was the #93 Kessel Racing Ferrar F488 GT3 with the driver line-up of Claudio Schiavoni and Andrea Piccini. 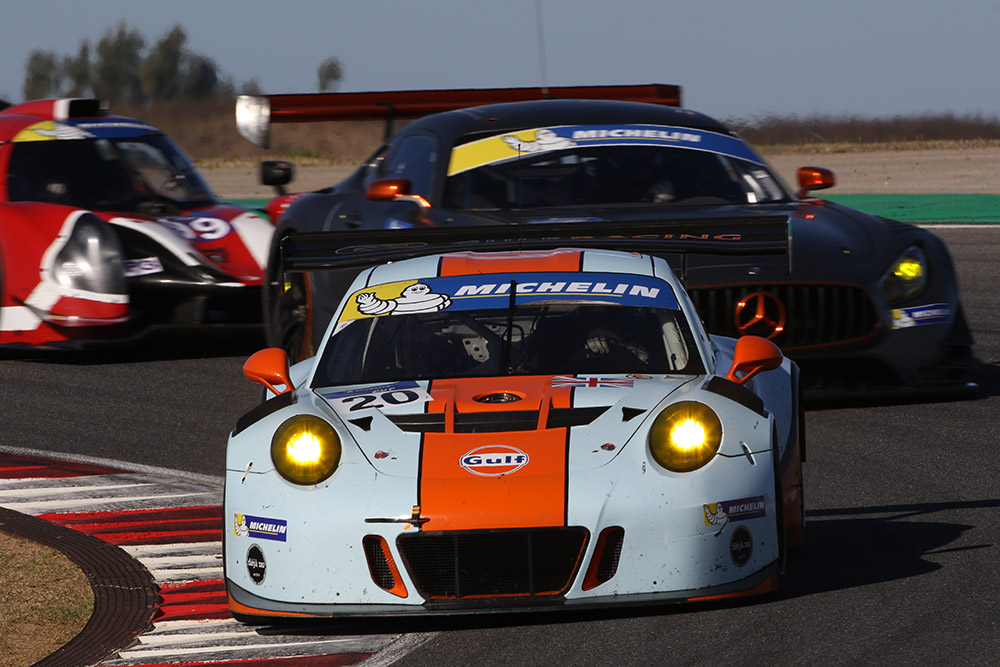 The #46 Ebimotors entry, going in to the two-hour race with an eight-point advantage at the head of the standings, courtesy of a pole position awarded to it following the disqualification of the #5 RAM Racing Mercedes AMG GT3 after the discovery of a fuel irregularity in post-qualifying scrutineering, finished fourth and secured the GT3 Teams Championship by two points ahead of the #7 car.

The first half of the race was interrupted by two Safety Car periods. The first, after 13 minutes, was to clear debris from the main straight following the disintegration of the front right tyre of the #46 Ebimotors Lamborghini. The race was green-flagged after 9 minutes but very quickly a Full Course Yellow was put into place, followed by a Safety Car, after the #5 RAM Racing Mercedes AMG GT3, with Ramon Vos behind the wheel, found itself in the gravel at Turn 12. Nine minutes was spent behind the Safety Car before the race re-started.

Alexander Toril, at the wheel of the #3 DKR Engineering entry, led the field from pole position in a start that saw spins from the Eric Trouillet in the #39 GRAFF Ligier, James McGuire in the #22 United Autosport Ligier and Alain Costa in the #89 N’Race car.

Anthony Wells, behind the wheel of the #79 Nielsen Racing entry, briefly took the lead but Toril was quickly back in front. The leading pair of Toril in the #3 car and Wells in the #70 entry settled down at the front of the field but it was the hard-charging Alex Kapadia in the #14 RLR Msport Ligier that was to change the complexion of the first half of the race after he moved up the field from sixteenth to third in the first 15 minutes. Kapadia passed Anthony Wells for second after 25 minutes and then took the lead ten minutes before the pit window opened.

Kapadia stayed in the #14 car as long as he could but after the driver changes had cycled through, it was the #3 DKR Engineering, now in the hands of Jean Glorieux, that led.

Colin Noble, in the #79 Nielsen entry, was pushing hard in second place but a drive-through penalty for exceeding track limits with 28 minutes remaining put paid to his chances of competing for the win and promoted Andrew Meyrick in the #98 Motorsport98 Ligier to second.

A second penalty for the #79 car for track limit infringements meant that the #55 Spirit of Race Ligier, with Michele Rugulo at the wheel, was able to move into third place.

Jean Glorieux and Alexander Toril were delighted to take their fifth win of the season.

“(The win) was not like the others but at the end of the day we won and that’s important,” said Toril. “The Safety Car at the beginning was really hard for me because all the time I had built was gone. But Jean did an amazing job. He had a good pace and was struggling a bit with the tyres at the end. (It was) perfect work by the whole team and especially by Jean. I not going to le him do any more of the second stints. I think I will keep them for myself!”

The GT3 battle meanwhile, was always going to be enthralling with the championship contenders separated by just eight points going in to the final race.

The #46 Ebimotors Lamborghini, with Emanuele Busnelli at the wheel, led the field away from the grid but disaster struck for the Italian team after just ten minutes when the #46 car slowed. Shortly after, the front right tyre problem which caused the first safety car period forced the #46 car in to the pits.

It rejoined in fifth position in class, ahead of the #5 RAM Racing Mercedes, a position from which appeared it couldn’t improve on.

Meanwhile the #7 Lee Mowle Mercedes, with Mowle at the wheel and which had briefly taken the class lead, was passed by the #8 SVC Motorsport Lamborghini, driven by Cédric Mezard. This now put the championship contenders in second and fifth places in class and would have given the GT3 title to the #7 Lee Mowle by dint of more second place finishes.

There was further drama for the #46 car after the race stewards determined that all the damage caused by the tyre failure had to be repaired in the pit stop. This resulted in the Lamborghini remaining stationary for seven minutes and rejoining the race four laps down.

Ben Barker, behind the wheel of the #20 Gulf Racing Porsche after the driver changes, was on a charge and passed Phil Keen in the #7 entry for second place with 40 minutes to go. Barker went on to take the class lead while Keen passed the #8 SVC Sport Management Lamborghini driven by Steve Hiesse for second with 20 minutes remaining.

The #8 entry then encountered an issue during a pit-stop, promoting the #46 Ebimotors entry into fourth place and back into the lead of the GT3 championship, the positions now remaining unchanged to the chequered flag.

As a result of clinching the GT3 championship, Emanuele Busnelli and Fabio Babini can now realise their dream of entering the 24 Hours of Le Mans. 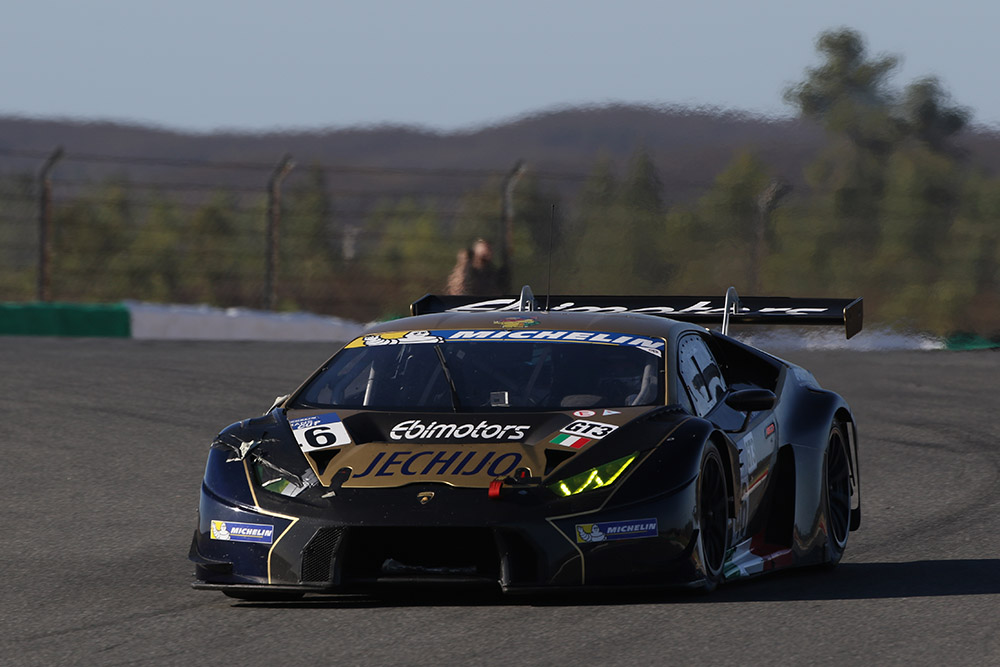 “I’m very emotional, “ said Busnelli. “It was a crazy race but I’m so happy because we really drove so well in all the races. We push as much as we can. The car was amazing and I’m so, so happy for everyone.”

“It was a dramatic race because after three laps we had problems – with bodywork, with the tyres and the pit,” said Fabio Babini. “The point for pole position was very important for the championship. I’m very happy for my first championship and (racing at) Le Mans with Emanuele.”