And more importantly, it helped to firmly establish the GT500 class, which would eventually evolve into the fastest GT racing category on the planet today. 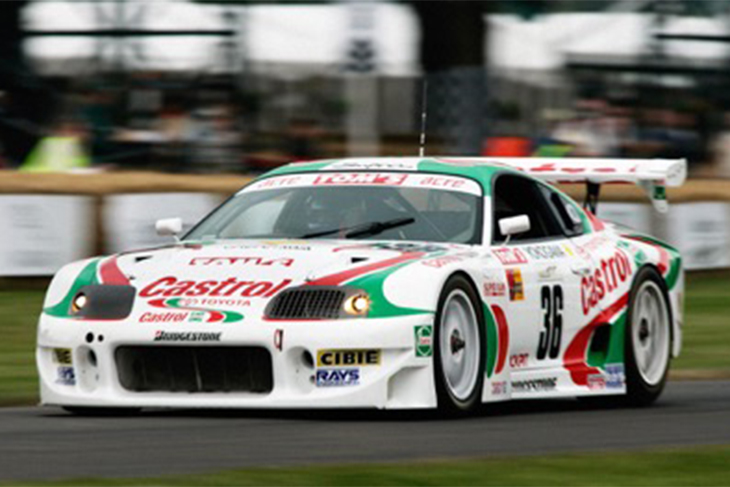 The Castrol TOM’s Supra made its debut in the 1995 All-Japan Grand Touring Car Championship (JGTC). This was the second full season of the new JGTC, and Toyota had their sights set on taking the fight to Nissan, whose fleet of mighty Skyline GT-Rs took the inaugural series title in ‘94 – and utterly dominated the Japanese Touring Car Championship (JTCC) in the early ‘90s before.

Who better to lead the way for Toyota than TOM’s (Tachi Oiwa Motor Sports) – who had represented Toyota at the highest levels of motorsport since 1974, including as fixtures of the Group C era at the 24 Hours of Le Mans.

It helped to firmly establish the GT500 class, which would eventually evolve into the fastest GT racing category on the planet today

The car was clad in its unmistakeable livery of pure white, dashed with the contours of verdant green and fiery red from their title sponsor. It was the exact same colours of Toyota’s fleet of Celica GT-Fours, which were the dominant force of the World Rally Championship at the time.

And that wasn’t all that the Castrol TOM’s Supra had in common with its rallying counterparts. 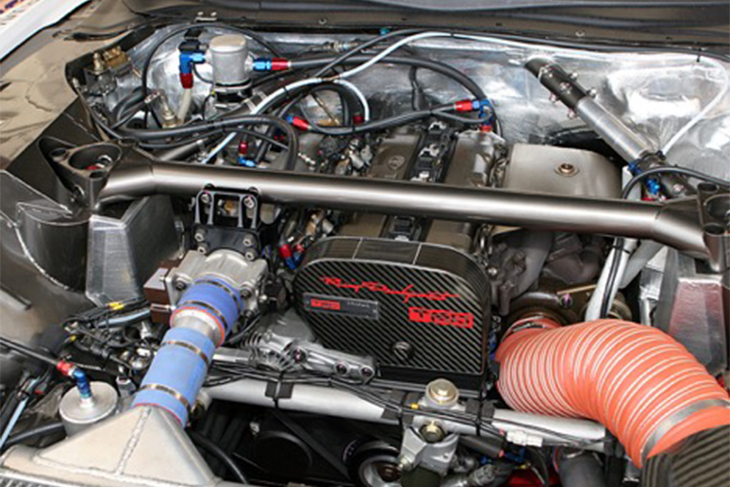 Toyota were the first major manufacturer to take advantage of the early regulations of the JGTC, which allowed for cars to run any engine, so long as it was in the original manufacturer’s range of engines.

So instead of copying Nissan’s approach and using a souped-up version of the three-litre 2JZ engine from the road-going Supra, Toyota instead opted to install the two-litre, turbocharged 3S-GT powerplant that powered their rally car fleet.

Tuned to the rigours of circuit racing, the 3S-GT was lighter, more efficient, and still produced a whopping 493 horsepower and over 600 Nm of torque – more than enough to match the Skylines for power and performance. 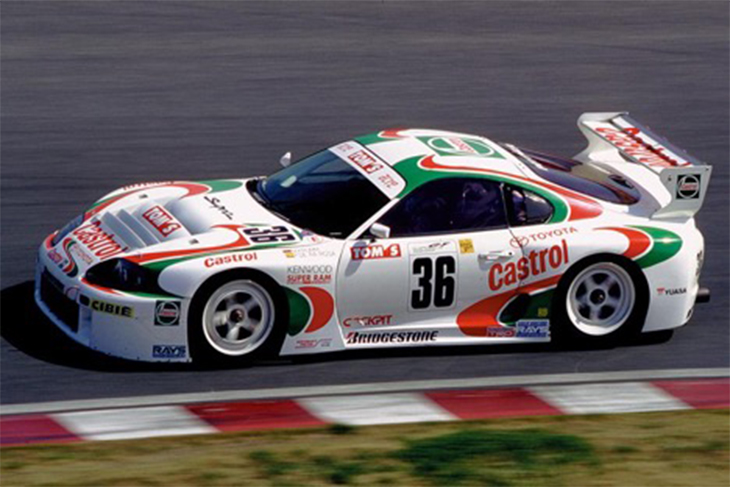 On June 25th, 1995, at the tight and technical Sendai Hi-Land Raceway, the Castrol TOM’s Supra scored Toyota’s first victory in JGTC competition, igniting the rivalry between Toyota and Nissan that still continues to this day.

The team was led by Masanori Sekiya, a long time Toyota/TOM’s ace driver who, just a week earlier, became the first Japanese driver to win the 24 Hours of Le Mans when he joined Yannick Dalmas and J.J. Lehto in their McLaren F1 GTR.

1995 and 1996 were building years for the Toyota GT500 programme, though in ‘96, both Toyota and Nissan were overshadowed by the factory-run Team Goh McLaren F1s that ran roughshod over the GT500 category. After McLaren departed acrimoniously after just one season, 1997 saw the spotlight put back on the power struggle between Nissan and Toyota.

Toyota continued to make improvements to the Supra GT. Wholesale aerodynamic refinements, a lighter engine, and the switch from an H-pattern to a Hewland sequential-shift gearbox were the big technical changes for ‘97. 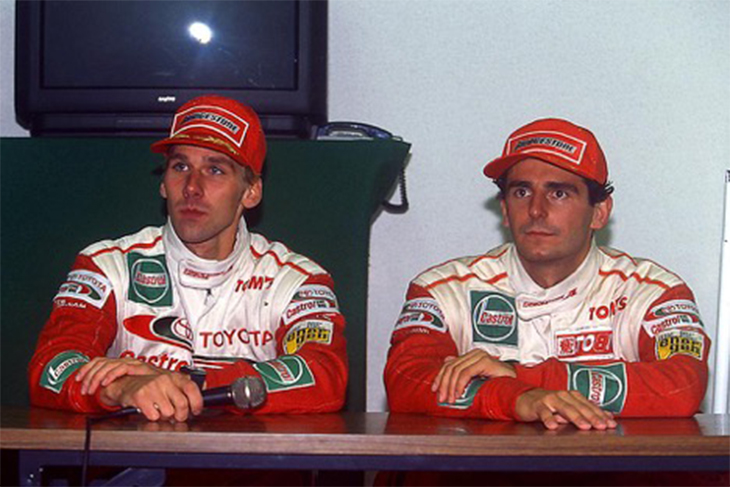 In addition, Toyota Team TOM’s expanded to add a second car, and reshuffled the driver lineups to put two young rising stars from overseas – Michael Krumm of Germany, and Pedro de la Rosa of Spain – in the flagship number 36 car. Sekiya would move to the new number 37 team, with fellow veteran Toshio Suzuki alongside.

After starting the season with an engine failure at Suzuka Circuit, the #36 Castrol TOM’s Supra rebounded from a first-lap incident to finish third at a rain-soaked Golden Week race at Fuji Speedway. That result would prove to be key as the season went on!

Then came the return to the mountainous Sendai Hi-Land Raceway, site of the Castrol TOM’s Supra’s maiden victory. In the closing laps, Krumm was chasing down the Zexel NISMO Skyline of ex-F1 hero Aguri Suzuki for the lead of the race. On the final corner of the penultimate lap, Suzuki ran wide enough to open the door for Krumm to power past, and on to their first win of the season.

1995 and 1996 were building years for the Toyota GT500 programme, though in ‘96, both Toyota and Nissan were overshadowed by the factory-run Team Goh McLaren F1s that ran roughshod over the GT500 category

Toyota had the upper hand on Nissan, but going into the penultimate round of the season, it was another one of Toyota’s oldest works racing teams, Team SARD, that looked set to take home Toyota’s first GT500 title.

Masami Kageyama and Tatsuya Tanigawa swept both races at Fuji Speedway, and the Denso SARD Supra entered the penultimate round at Central Park Miné Circuit with a 16-point lead over Krumm & De La Rosa.

In a must-win scenario, the Castrol TOM’s Supra, on the strength of flawless pit work and perfect driving, won their second race of the season – and overturned a 16-point deficit into a 4-point lead heading into the final round at Sportsland Sugo. 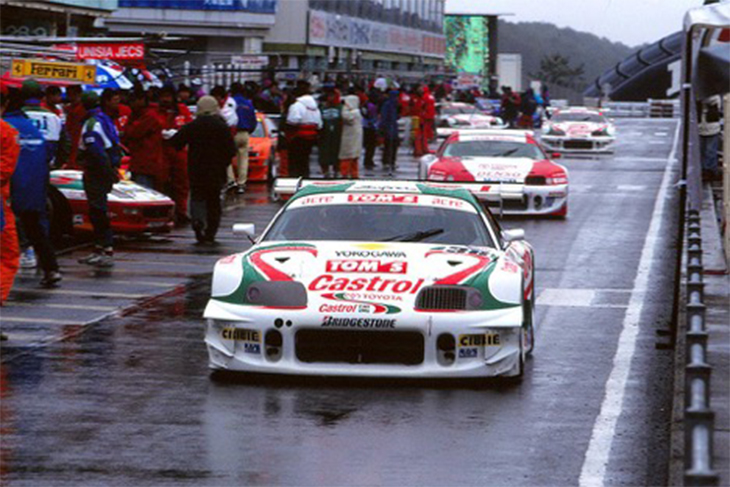 At Sportsland Sugo, three of the four cars that were still championship-eligible were Toyota Supra GTs, led by the #36 Castrol TOM’s Supra and the #39 Denso SARD Supra. And, as so often is the case in October in Japan, it rained on the day of the 81-lap season finale.

On lap 19, the sun burst from out of the clouds, but the track was still treacherously wet. Michael Krumm saw an opportunity to overtake Masami Kageyama for seventh place, as the two Toyotas raced down the hill, past the start/finish line and into turn one. Under braking, the two cars clashed – putting the #36 Castrol TOM’s Supra into the gravel!

Kageyama drove away from the incident, but the right-rear fender was damaged – and would cause complications on their mid-race pit stop, where they lost two laps in repairs.

Out of all of this, the second Castrol TOM’s Supra, the #37 of Masanori Sekiya & Toshio Suzuki suddenly found themselves in the lead of the race with a real chance to swoop in from 13 points out to take the GT500 championship in the last race! But with just six laps to go, on a still-damp track, Suzuki spun out of the lead and dropped down to fourth place – denying Sekiya & Suzuki the championship.

Tanigawa drove the Denso SARD Supra to seventh place in the finale, bringing his co-driver Kageyama to 67 points, tied with Krumm & De La Rosa in the #36 Castrol TOM’s Supra. 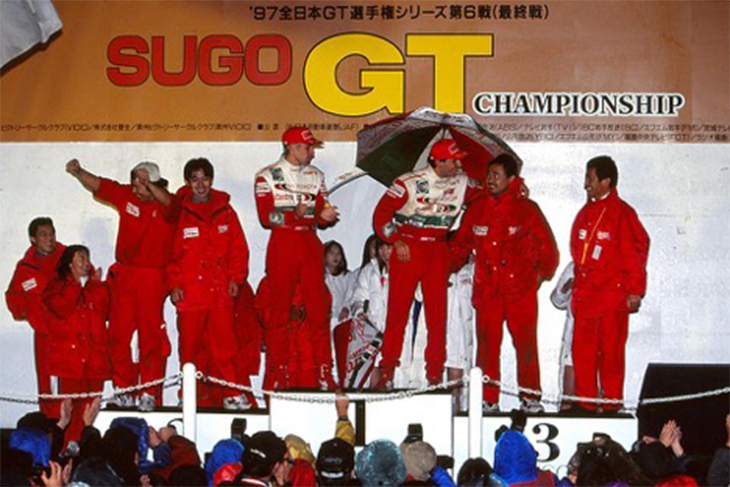 To date, it is the only time that the GT500 Drivers’ Championship has ever been decided on a tiebreaker.

Krumm would leave Toyota at the end of 1997, joining Nissan in 1998. With Nissan and NISMO, Krumm would go on to win the 2003 GT500 championship, and later the 2010 FIA GT1 World Championship. He retired from full-time competition at the end of 2015 as Super GT’s most-capped foreign driver, and still remains with NISMO as a test driver and brand ambassador.

De La Rosa ended 1997 by also winning the Formula Nippon (now Super Formula) Championship for Nova Engineering, with six wins and a perfect ten podium finishes from ten races. The Spaniard became the first double champion of both GT500 and Japanese Top Formula competition, and would go on to spend the next 17 years in Formula 1 as a race and test driver for the likes of Arrows, Jaguar, McLaren, Sauber, Hispania Racing Team, and Ferrari.

Sekiya returned to the #36 car in 1998, and finished runner-up in the 1999 GT500 championship with co-driver Takuya Kurosawa. At the end of the 2000 season, at age 51, Masanori Sekiya retired from racing after 22 years. He became the Team Director of Team TOM’s soon after his retirement – as of 2017, Sekiya is the director at Lexus Team KeePer TOM’s. 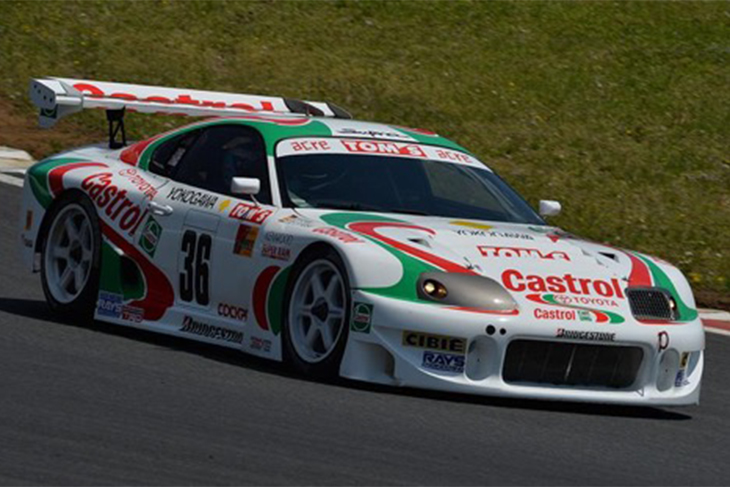 Castrol ended their title sponsorship of Toyota Team TOM’s after the 2001 season, bringing an end to one of the most popular partnerships in JGTC history after seven seasons.

But TOM’s would continue their winning ways – they went on to win two more GT500 championships in 2006 and 2009, with ace driver Juichi Wakisaka, and a young German by the name of André Lotterer – who went on to become a three-time Le Mans 24 Hours champion with Audi Sport Team Joest.

Toyota’s first GT500 championship would establish the rivalry with Nissan, and Honda would soon join the fray – creating the three-faction rivalry that still exists today in the Autobacs Super GT Series.

Castrol ended their title sponsorship of Toyota Team TOM’s after the 2001 season, bringing an end to one of the most popular partnerships in JGTC history

And thanks to its starring role in games such as the Gran Turismo series, the Castrol TOM’s Toyota Supra continues to influence new generations of automotive and motorsports enthusiasts, even decades later.

In fact, this was the car that made me fall in love with Super GT racing, when I saw it for the first time as Toyota’s top-of-the-line racing machine in the original Gran Turismo. Even those who have never watched a Super GT race, but know of this car, speak highly of this incredible machine.

At the risk of coming across as a hired spokesperson, the fact is that Toyota have spent over a half-century building some of the world’s most spectacular and innovative racing vehicles – from the 2000GT and the infamous Toyota-7, to the GT-One and the most recent TS050 Hybrid.

Arguably though, no car they’ve ever built is as recognizable and beloved the world over as the legendary Castrol TOM’s Supra.