It only seems like yesterday I was preparing for my home race at Silverstone but with the chequered flag falling on Saturday night in Bahrain, the 2017 WEC season drew to a close. We couldn’t quite make up the deficit to the Ferrari and Porsche, but I am still very proud of the whole Ford Chip Ganassi Racing team for helping myself and Andy secure 3rd in the drivers’ championship and 2nd in the teams’ standings. The spirit in the pits has been excellent all season and I am always impressed with team’s fighting spirit and will to improve the car and pit stop times.

It has been an incredible year for us, certainly one I wont forget in a long time. Highs of course include winning that opening round at Silverstone as well as in Shanghai for the second year running and of course finishing as runners up at Le Mans. I really feel like we got the maximum out of the majority of the races and the only rounds I feel we dropped points were at Fuji and Spa.

During the second half the season we’ve really been up against it to have the ultimate pace in the races and under the surface we’ve been paddling like crazy to keep our heads above water. Shanghai is a race I am so proud of the team for as we weren’t quick enough but still managed to pull off the win due to fantastic strategy and perfectly executed pit stops, overtakes and defences.

Focusing on Bahrain, I was reasonably happy with 3rd on the grid. The gap to pole was only 4 tenths compared with a second a year ago. We knew that Ferrari would have to really struggle or have issues for the championship to be obtainable and I think the whole team treated the weekend just like any other, rather than worrying about championship permutations. 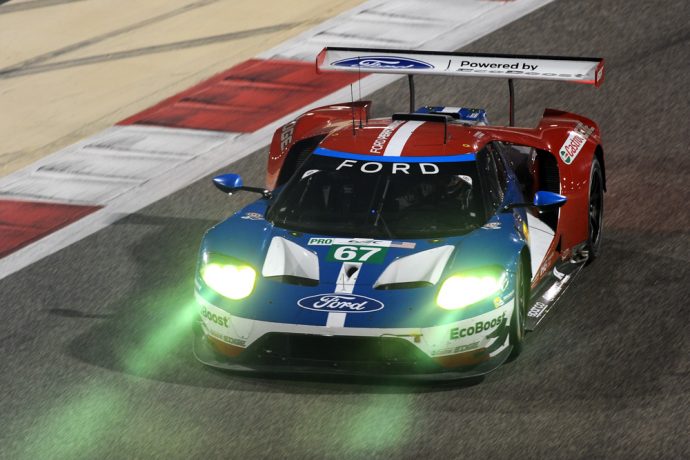 I certainly was in no mood to start changing my approach and I was on the attack from the first corner with a pre-planned around the outside move at turn one to give me the inside for turn two which moved me up to 2nd at the expense of Jonny Adam in the #97 Aston Martin. I pushed like crazy with the caveat of trying to look after the tyres as best I could at the high degradation circuit. I was only three seconds behind Sam Bird at the end of the first stint but it seemed like the Ferraris got faster and faster as the race wore on and we couldn’t live with their pace in the end.

Andy was always in a scrap and had some great overtakes and defensive moves and it looked as if we were set for 3rd going into the final two hours of the race. However, delays in firing up the Ecoboost engine meant I lost time in the pits and dropped behind the #91 Porsche of Fred Makowiecki. I managed to close the gap to about 30 seconds and with a fresh left side put on the car for Andy at the final stop he went off to hunt down the Frenchman. It certainly looked like his tyres had fallen off a cliff and at times Andy was 3 or 4 seconds a lap faster so the overtake for the final spot on the podium was a formality with 20 minutes to go. It was a great to finish the season spraying the rose water and massive congratulations must go to Ferrari and especially James and Alessandro for a great job all season in the #51 car.

It was great to see Fernando in the paddock on race day and his test with Toyota on Sunday will bring the spotlight to our side of the sport and this can only be good news. A fellow GT driver suggested to me that LMP & GT drivers should swap cars on the Sunday so the could see what each other have to go through in the traffic. While the comment was of course said in jest, clashes between different classes of car this year have been all too frequent and we do have to keep an eye on this going forward. I am lucky to have driven both so I know what the LMP driver is going through but at the time I have had to take evasive action at almost every race to prevent contact. 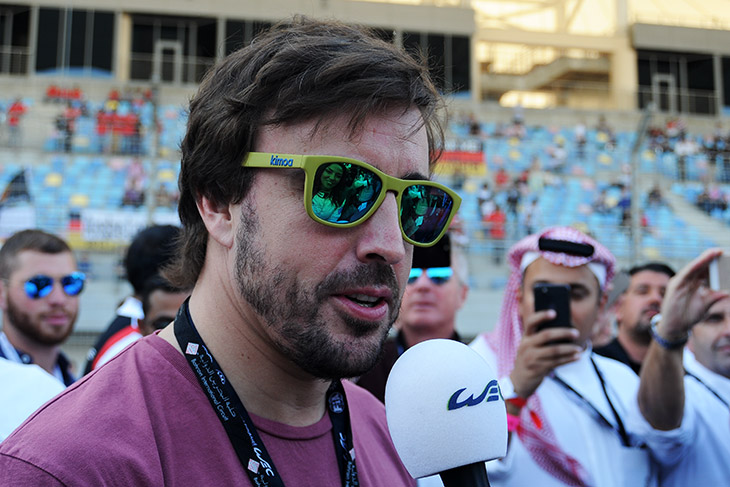 Another precedent we can’t have is GTE AM cars getting involved with the GTE PRO battles. As our title hopes have grown stronger I’ve noticed AM cars from rival manufacturers have been making it increasing difficult for us to pass, and at times, been taking the full defensive line. I overheard a PRO driver thanking an AM driver of the same manufacturer for all their help in the race before the podium and things like this will turn ugly if it is not nipped in the bud sooner rather than later.

Overall it’s been a great season for the WEC. We go into a transition year in 2018 as the first half of the super season begins and I can’t wait for it all to kick off in Spa. Some of the Ford GT’s weaker tracks have been removed from the calendar and I am relishing two Le Mans in one season in this incredible car.

As our title hopes have grown stronger I’ve noticed AM cars from rival manufacturers have been making it increasing difficult for us to pass, and at times, been taking the full defensive line

I feel extremely lucky to be involved with this team and to be team mates with Andy. We’ve formed a super tight partnership and I feel that I am driving the best I have in my whole career thanks to his help and experience.

We are determined to win Le Mans and the World Championship in this great car.